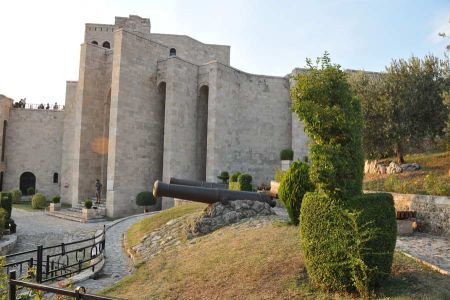 During our visit to the Skanderbeg Museum, the desire for more information about this fighter for independence and freedom as a ruler of the past had grown, surely affected by all the mythologies that still surrounds his personality.

Especially for rulers during the Middle Ages a certain skepticism is quite appropriate, because it is still so much devoted to religious beliefs and allegedly defended for the freedom to its citizens to provide a better life, as they often said. So far nobody could give a really clear answer to the question why cultural property from Greek-Roman times, and that includes the supply of a city with fresh water, baths and toilets, and of course the drainage of the city to get rid off the gray water and the feces, of course, not only does not exist but in the middle ages the necessary techniques were completely unknown. Or where were democratic approaches and participation of Greeks vanished?

But now lets turn back to Skanderbeg, whose real name was Gjergj Kastrioti and who was the youngest son of Prince Gjon Kastrioti and his wife Vojsava Branković. Gjergjs father almost constantly led war against the Ottomans since 1407. The royal family had four sons and one daughter. 1423 young Gjergj together with his brothers was send as a hostage to the court of the Sultan of Constantinople, where to the Orthodox Christian faith, he joined as a member of the Janissaries, changed his believe to Islam and received new names translated into Turkish-language form of the Greek first name "Alexander", it became İskender,. 1438 he was sent back as Bey and Wali of Misia, Skuria and Jonima (main town Kruja) by Murad II. to native Albania.

When in November 1443 the Hungarians were victorious over the Turks in Niš, his father was murdered at the behest of the Ottomans, reason enough for Skanderbeg to leave the Sultan's army together with his subordinated Albanians. He seized Krujë Castle on 27th of November 1443, fell completely away from Sultan the following day and converted to Catholicism. In the period from 1443 to 1444 he ruled the Principality of Kastrioti, which then burst into a regional defense alliance against the Ottomans.

1444 the "Turkish fighter" allied with Albanian and Montenegrin nobles to the League of Lezha. Together with this alliance Skanderbeg could successfully fight 18 years of war against the Ottomans, who did not succeed, permanently fixed in central and northern Albania. Kruja was repeatedly attacked by the Ottomans, so in the years 1450, 1466, 1467 and 1478th

1451 Skanderbeg married Donika Arianiti in Ardenica Monastery in Southern Albania. She was the daughter of the Prince of Kanina, Gjergj Arianiti. 1456 his son Gjon Kastrioti was born, the only descendant of Skanderbeg.

1461 Skanderbeg closed a three-year truce with Sultan Mehmed II. Although there were skirmishes in the period that followed, another ceasefire was closed in April 1463 in Üsküb (Skopje). In this quiet phase of the war in the early sixties, Skanderbeg had traveled to Italy to ask for money and troops of his feudal lord King Alfonso I of Naples. This travel granted Skanderbeg a board and also gave him extensive lands in southern Italy, where his descendants later fled from the Ottomans.

Until his death in 1468, Skanderbeg defended Albania from the fortress of Kruja against the Ottoman Empire. His sister Mamica helped him in the defense. She later died in battles against the Ottomans, which repeatedly tried to break the power of Skanderbeg with large armed forces. So they repeatedly besieged Kruja, without being able to take the fortress. The Albanian forces were too weak to expel the Turks completely, and the hoped-for support from other European rulers did not appear.

Skanderbeg died on 17 January 1468 due to fever and was buried in a church in Lezha. His twelve year old son followed him in the rule. Ten years after Skanderbeg's death, the Ottomans could conquer Albania  in 1478 and following dominated more than 400 years. Many members of the noble family of Kastrioti and other Albanians afterwards fled afterwards to the promised lands of Southern Italy, even today their descendants are living there, the ethnic group of the Arbëresh. The grave of Skanderbeg was destroyed by the Ottomans even it was in the Selimiye Mosque of Lezha, where his body had been buried. Many Turks are said to have taken parts of his remains as a talisman.

The mosque was destroyed again in 1968 and rebuilt in the 1970s as a memorial with replicas of the helmet and the sword of Skanderbeg. The originals are in the possession of the Kunsthistorische Museum Vienna and are exhibited in the Arms and Armour in the Neue Burg. To mark the 100th anniversary of the proclamation of independence of the Republic of Albania on 28 November 2012, the helmet, the sword and other personal artifacts were exhibited in Tirana for a few days at the Historical National Museum.