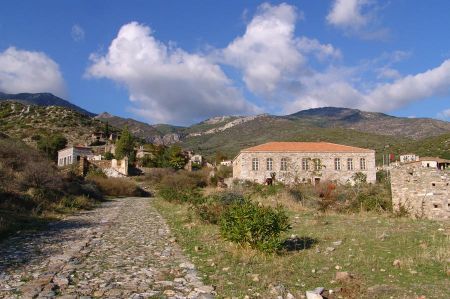 During our visit at some friends in Didim we had the opportunity to see some places next to the touristic spots of Didim. We heard about an old Greek village with old stone houses, we would like to see.

Having arrived at the ancient city of Miletos, instead of turning right to Söke, a small side road with a small sign reading “Doğanbey” and pointing to the left, leads up to the village. After some questions to local people we, at least, could reach our destination.

The village of Doğanbey which was named Domatia and populated by the Greeks until the population exchange of 1924, in a valley of National Park on Dilek Peninsula is a beautiful restored village of old stone houses which are typical for the former Greek places. The place is overlooking the Eagean sea and the Menderes river delta with a breathtaking view for years. Right behind the range of Samson Mountains there is the village Davutlar next to the famous resort of Kuşadası.

Some of old stone houses in the village are renovated today. The village owns a Visitor Centre to provide information to visitors during the summer season. The professional staff provides enviromental education through workshops to the local people of the region.

Take your time off normal business and spend some time to walk through this lovely village and be impressed by the architecture of the buildings and the love and care people have spend for all the details in walkways and spots. The village is still carrying the traces of past civilizations.

Turks who emigrated from Salonika to the village through the exchange, due to limited expansion opportunities and to be close to the fields moved down to the plain area and built a new village, Yeni Doğanbey.

Hint for the way: Just a couple of kilometers to the right after the village Tuzburgazı, the old country road is leading to the former village of Doğanbey crossing the swamp lands of Karina.The narrow walkway leads you across a bridge where you should keep on the right because the other way leads you back to “new” Doğanbey little deeper to the sea side. If you do not have a car available, you can use the minibus system from the main bus station in Söke which is going to Tuzburgazı – Doganbey directly.

Once you have visited the village and got little hungry because of walking we would suggest you to turn back to the main road and continue to the top of the peninsula passing new Doğanbey. There are couple of nice seafood restaurants near the village. Delicious local appetizers are served for starters, called mezze which would tantalize your taste buds.
The fish served in these authentic restaurants is very fresh and tasty. The restaurants have also nice view of the Aegean, they are operated by local people.

Söke plain was formerly the sea and the lake Bafa was a bay. One of the most beautiful city of Ionia was built on the sea coast overlooking the ocean on steep slopes and terraces. Today, after several centuries of changes in the landscape, it is an inland site. On the way to back we advice you to visit Ancient City of Priene.