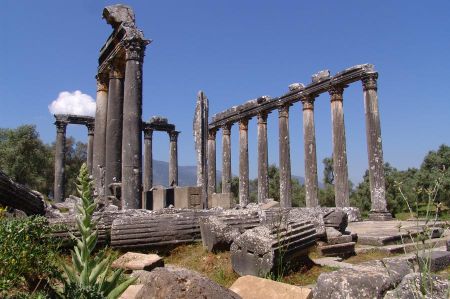 Euromos, one of the antique cities of Carian lands, located between Lake Bafa and Milas town, is about 12 km away from the town center of Milas.

Still standing in their grandeur, columns of this enigmatic temple of the city salutes you from amongst the olive groves as you travel along the main road. She is indeed one of the rare antique settlements that you could easily reach to by simply following the road signs, Euromos is first mentioned in 500 BC under the name of Hyromos / Kyromos. It is thought that the name of the city has evolved to Euromos in time in the Hellenic dialect. The list of cities paying tax to Attica-Delos League formed under the guardianship of Athens against the Persians contains the name of Euromos as a member.

Euromos city was invaded by Macedonian King Philippos V. between 221 and 179 BC and again invaded by its southern neighbour Mylasa in 167 BC. Subsequently, freed from the invasion of Mylasa with help from Rhodes, the city had to form an alliance with Mylasa at a later stage. Not happy with the alliance, its neighbour Heraclea attacked Euromos and seized many important assets of the city.

Euromos antique city is regularly mentioned in sources regarding the Carian and it is accepted that she was the most important Carian city second to Mylasa.

The city gained fame with its coinage carrying a depiction of Zeus. Coinage belonging to the city of Euromos has been found at the Caunos archaeological excavations. It has been established that Euromos in fact continued to mint its own coinage in the Roman era as well.

The most important structure that has survived from this delightful city is the Temple of Zeus, which is formidable and has much more estetic appeal than its contemporaries. Constructed at a foothill and dedicated to god Zeus, it is suggested that the temple was erected in the Roman era in 200. A.D. One of the best preserved temple structures in Anatolia, 16 of the Corinthian style columns are still standing. For that reason, the antique settlement is known as “Pedate “amongst the locals. The inscriptions on columns contain a list of those who have contributed financially help to the construction if the temple.

Archaeological excavation and restoration works around the Zeus temple began in 1970’ies but were abandoned at a later stage and no more work has been done since then. If you go for a walk around the hillsides on western side of the temple, you will discover the city walls. The city’s theatre is nestled into the niche that is carved into the hillside just over the north east lowland. Considerably dilapidated, this structure now stands amongst olive groves and only 5 rows of seating are visible. Scattered on a wide area on both sides of the land route, the remnants of this antique city seems to be longing for the days when they come to light and present the discovering visitors with a visual feast.