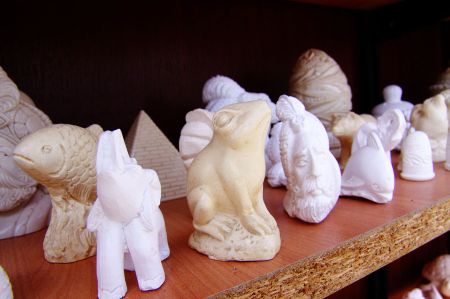 Eskisehir (in ancient times it's name was Dorylaion) has got about 706.000 inhabitants and because of that is one of the biggest cities of Anatolia and as well capital city of the region of the same name. Today there is a well known university called Anadolu University and a huge air craft base of NATO.

Eskisehir is quite famous because of the exploitation of meerschaum (sepiolite / Lületas). In the city centre there certain shops selling pipes made of meerschaum, which are being carved over here since the 17th century.

The most comfortable way to reach Eskisehir is by rail, which was done by German engeneers all the way to Baghdad. The most difficult part of the construction, the grinding tunnel at Bilecik, separates the railway into the directions of Ankara and of Afyon.

The town has a long Hethithian, Phrygian, Roman, Byzantinian and Osmanian history. In the year 1097 the Knights of the Cross were fighting over here against the Seldjuks at the battle of Dorylaeum.

Much later groups of Tatarian people settled over here.

During the Turkish war for liberation there were some fights happening over here as well.

Since 2004 Eskisehir has got modern trams which are being used by lot of inhabitants daily. At stake there are two lines connecting the importants places in town.

Quite impressive are the old houses especially in Ordunpazan, in the centre of Eskisehir as well as the bridge crossing the Porsuk river as well in the centre.

Some more well known places of Eskisehir are:

* Archaeological Museum
* Meerschaum Museum
* Yunus-Emre-Museum
* TCDD-Railroad Museum
* The ancient town Pessinus at the village of Ballıhisar at Sivrihisar
* the Phrygian Town of Midas (Midas Şehri) at Seyitgazi
* Thermal springs of Çardak and Gümele.