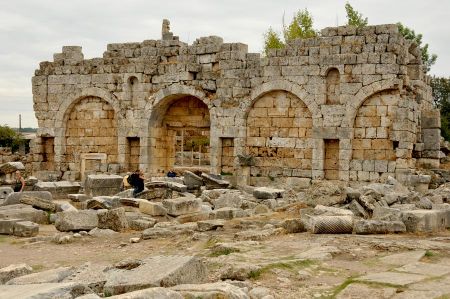 Perge, today one of the best preserved, most visited ancient sites on Turkey’s sun-soaked Mediterranean shore, in the A.D. first century was a living, booming Roman city, its colonnaded streets thronging with prosperous citizens, its massive theater crammed with spectators for shows and gladiatorial displays, its opulent bathhouses humming with the tittle-tattle of wealthy merchants.

From here, in A.D. 46, the apostle St. Paul set out on his first proselytizing mission. His initial goal was Antioch in Pisidia, set high on the Anatolian plateau north of picturesque Lake Egirdir. A former garrison town, Antioch may have been rather less ostentatious than its rival on the coast, but it was doing very nicely nonetheless, thanks to its strategic position on a major trade route and its fertile hinterland. Between these two prospering settlements, however, lay a formidable yet stunningly beautiful barrier -- the mighty Toros mountain range.

Unlike the single-strand of the Lycian Way, the St. Paul Trail has two starting points, one at Perge, the other a little further east along the Pamphylian plain at Aspendos, a Classical-era site famed for its immaculately preserved theater and the spectacular opera and ballet festival held there each June. The twin twines of this fork combine at the dramatically situated ancient site of Adada, high in the Toros, from where the “handle” of the fork strikes north before curving lazily around the western shores of Lake Egirdir

St. Paul, of course, succeeded in overcoming the varied obstacles on his evangelizing trip from the balmy Mediterranean to the severe Anatolian uplands, and his journey provided the inspiration for Turkey’s second long-distance walking route, the St. Paul Trail. Like its precursor, the Lycian Way, the trail was the brainchild of British/Turkish citizen and Antalya resident Kate Clow. Looking for a new challenge after establishing the Lycian Way, she set about researching the potential line of the route with her usual tireless determination. The first long-distance route had been tough enough, but at least the region it traversed had a long-established tourist infrastructure, and most locals were both well used to, and could see the economic benefits of, foreign visitors. By contrast, much of the dramatic landscape the St. Paul Trail wends it way through is not only topographically extremely challenging, but contains largely remote rural communities, many of whose residents have had little or nothing to do with foreigners (and that includes big-city Turks!).

So the sight of a lone blonde-haired English woman carrying a backpack, two mischievous dogs in tow, turning up in their village or yayla (summer pasture) asking questions about (often long-forgotten) footpaths, mule trails and droving paths was weird and wonderful indeed. And what’s that strange language she’s talking? they mused (many rural Turks simply don’t believe a foreigner can speak their language and so don’t bother listening). Hang on though, it sounds like, no it is -- it’s Turkish! We can talk to her! With that they were off, gabbling away in village Turkish so strongly accented even fluent Turkish speaker Kate sometimes struggled to understand. Once their initial reservations had been overcome, most villagers were all too happy to help. She wanted to paint some red and white marks on rocks and trees so foreigners could walk to their village, then onto the neighboring one? Sounds crazy (there’s a bus, you know) but hey, aren’t all foreigners a bit crazy? You say we can make a bit of money by opening up our homes so foreigners can eat and sleep here? Alright, I guess, but we’d have put them up for free, that’s how it works out here with guests!

After months of on-the-ground research, Kate was finally happy with the line of the route. Then came weeks of graft, with a team of waymarkers drawn from assorted parts of the globe cutting back scrub, lopping overhanging branches, shifting fallen trees and, of course, painting red and white marks at regular intervals along the route. Unlike the single-strand of the Lycian Way, the St. Paul Trail has two starting points, one at Perge, the other a little further east along the Pamphylian plain at Aspendos, a Classical-era site famed for its immaculately preserved theater and the spectacular opera and ballet festival held there each June. The twin twines of this fork combine at the dramatically situated ancient site of Adada, high in the Toros, from where the “handle” of the fork strikes north before curving lazily around the western shores of Lake Egirdir, crossing the lake at its narrowest point (local boatman permitting!) and finally cutting across rolling Anatolian steppe eastward to Antioch in Pisidia.

Even Kate is not sure how many hikers the St. Paul Trail attracts yearly, but it’s certainly far less than the Lycian Way. This is in part because the apostle’s route is less well established than the Lycian Way (it opened in 2004, the Lycian Way in 2000), but mainly because it forges its way through some very remote terrain, where the only overnight options are village houses or wild camping. This is not to say inexperienced walkers can’t hike certain sections of the trail independently, especially if they base themselves in places like the spectacular Köprülü Canyon, Davraz Ski Center near Isparta, right on the lakeshore in the charming town of Egirdir or at the trail’s end in Yalvaç. Of course, if you don’t want to hike the trail independently, there are several companies who lead guided walks on the trail and will arrange all accommodation, transport and food -- allowing you to walk unencumbered by the hefty backpack which is de rigueur for the independent hiker on this trail.

As I was involved in helping waymark (and on the St. Paul Trail, research) both long-distance trails, people often ask me which one I prefer. Despite the undoubted wonders of Lycia, with its gorgeously indented coastline, unique ancient Lycian tombs, mellow winter climate and serried ranks of knife-edge ridges, I invariably reply, “The St. Paul Trail.” Why? Well, there’s the jumble of peaks, the highest of which fall just short of 3,000 meters, a couple of which (Barla and Davraz) are just short diversions from the trail itself. Then there are the plunging canyons, cascading waterfalls, pine and cedar forests, stunning wildflowers and the ever-changing hues of Turkey’s fourth-largest lake, Egirdir. Throw in the panoply of ancient sites en route, especially the remoter ones such as mountaintop Adada, reached by an incredibly well-preserved stretch of Roman road (tramping up this from the valley below you really can imagine yourself trailing in the wake of St. Paul), and you can begin to see why I express a preference for the St. Paul Trail. For me what really gives the “trail” the edge over the “way,” though, is its remoteness. Here, in late spring and summer, semi-nomadic Yörük still graze their goats across mountainsides scented with thyme, make their own yogurt and cheese and sleep in tents woven from the hair of their own flocks. It’s hard to believe that just 30 kilometers away and 1,500 meters below, tourists are adjusting the air-conditioning in concrete high rises fronting the Mediterranean in resorts such as Belek and wondering which swimsuit to don that day.

The St. Paul Trail may, as yet, not attract the same numbers of walkers as the Lycian Way, but it has garnered at least as much critical acclaim. The US’s Boston Globe and Britain’s respected Sunday Times, Independent and Observer newspapers have all featured articles on the trail, with the Independent’s Stephen Goodwin writing, “Yet for all the echoes of imperial pomp and saintly footfalls, the most treasured moments were in the mountains, where one is reminded that Turkish hill people are amongst the most hospitable in the world.” The route has also featured in outdoor and specialist walking magazines from Israel to Belgium, the US to Holland and Germany to Australia.

The trail has received some support from Turkey’s Ministry of Tourism, but most of the maintenance and promotion is down to Kate herself. In April she’ll be supervising an international band of volunteers from the US, Switzerland, Germany, Holland, Belgium, Israel, Spain and Italy as they cut back the scrub which has invaded some parts of the route, and touch up sun-bleached and frost-damaged paint marks. Maintaining several hundred kilometers of waymarked trail to the French Grande Randonnee standards on which it is based in no easy task here in Turkey, but the locals are beginning to see what benefits the route has brought to their sometimes impoverished rural communities and are doing what they can. Ibrahim (Ibo) Agartan of the Lale Pension in Egirdir, a committed supporter of the project since its inception, along with Kate, has recently been up and down the route advising and training locals with pension or village house accommodation. There’s now accommodation in many of the villages on the trail, and this, along with the re-waymarking, should help consolidate the trail’s success and help bring a new lease of life to previously declining rural areas.

On a final note, the Lycian Way is at its best in late autumn, winter and spring; from mid-June to mid-September, only the hardiest of souls can walk in the searing heat. By way of contrast, and great news for those of you who get the bulk of your holiday in summer, the St. Paul Trail is manageable (apart from the initial sections near Perge, Aspendos) even in July and August. Come the end of April, when the waymarking is completed and the red and white flashes glistening in the clear mountain air, the trail will be clearer than ever to follow. It looks like 2010 will be the perfect year to follow in the footsteps of St. Paul.