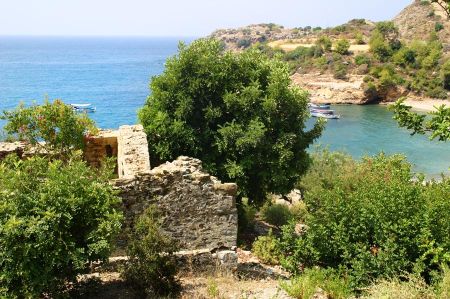 Iotape is one of the easiest reachable ancient towns in the surrounding of Alanya. About 33 kilometers away from the town, Iotape today is being split into two parts because of the main road leading from Alanya to Gazipaşa.

Once on that road you will notice immediately when reaching this ancient city because you will nearly move into the ruins of the buildings next to the road. The chosen place by the Romans for this town is typical in all respects; two bays close to each other are giving shape of a natural harbor with a higher plateau for the town to give protection from the sea.

The city got it's name from the King of the Kommagene, 4th Antiochus's wife Iotape (ac 38-72). It is known that beginning with King Trajan (98 – 117 AC) until the Kingdom of Valerian 253 – 260 BC) Iotape was producing it´s own coins. Treasures found from this period show the King on one side and the gods Apollo and Perseus as well as Tyche at the other.

At the city centre, you will see the ancient hamam of the city with it's sewers and both in good condition. The necropol, monuments and tonoz covered with little tombs located on northern hills are other constructions in quite good condition.

The peninsula between the two bays which is really of big height, shows the ruins of the former acropolis of ancient Iotape. For defending the place, huge walls all around the acropolis had been build, so the picture noticeable was like a huge castle. Because of really bad conditions of the ruins it is difficult to find all fundaments.

The harbor is another beautiful part of Iotape at the right side of the road. After visiting the Iotape city center, you may camp at the bay which hosts the ancient harbor of Iotape. You may want to swim among this historical sphere and taste the ancient water of Iotape. There is also a small cave beneath the harbor.