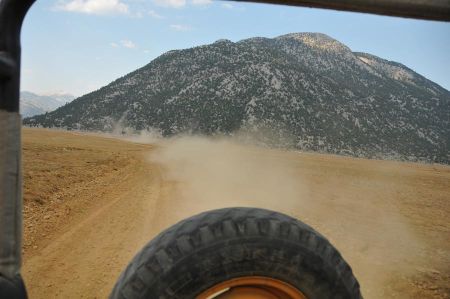 It is often possible to come across amusement rides named “Jeep safari” on board Jeeps in the tourism centers along the Riviera coast.

Presumably a traveler to Turkey will have thought about joining one of those safaris in their Turkish holidays at some point, albeit the loud speaking passenger crowd, splashing water about as they rode does indeed startle us rather than motivating us, the discovery journey participants.

Indeed, I don’t know how we can call such a journey a safari when the groups are large and a compulsory lunch is offered at a specific time at a specific restaurant.

Finally we have located a real jeep safari organization that runs off the beaten track. The main principle of this jeep safari was that the route to be taken was decided upon by the driver himself in line with his own instincts in relation to environment and nature. There is no definite itinerary and the rest points, even the times of lunch breaks and restaurants to stop off are not preplanned. Surely, such an improvised journey is made possible when one uses a single group of passengers on a single jeep.  That way, it is ensured that the number of passengers is limited. In return, we discovered sensational rest points surrounded by superb views and unspoiled nature. We stopped off at rarely visited, almost unknown sites where one could spend days at an end.

Ömer, the driver and guide in this safari gave a clear answer when asked a direct question: If the driver is not interested in the nature and the geography, uses the same route every time and stops at the same locations and possibly make the same jokes every time, how will the safari passenger have fun and enjoy the experience? That is a boring and monotonous for both the driver as well as the journey goers. But, I on the other hand relish the green of nature and feel happy in observing and absorbing the scenery and beauty of my surroundings. As such, when I form a participant group, I follow my instincts in terms of the itinerary. At times once a week and sometimes once every three weeks I will have the opportunity to take people on a jeep safari, but I will never use the same route and I usually follow the mountain tracks rather than the roads.

We can only confirm this statement. After leaving Manavgat a few kilometers behind, we jut into pine forests without pulling into land roads and continue on to Taurus Mountain range.  A river bed, which has unfortunately dried in this season, the mini sand dunes and pebbly floor, has instead served as our path to the next leg of our journey. The next leg took us to a hilltop of about 600 meters in height.  From this point on, we followed the tracks over Taurus Mountains, engulfed in magnificent panoramas of the Mediterranean in the meantime.  Once over the hill, we stopped for a rest and savored what is offered by a superb vista opening to waters of Oymapınar.  The route subsequently took us higher up the mountains and we reached to ruins of a small Byzantium settlement passing through the paths used by forestry workers. Indeed, it was as if the ruins of this temple were suddenly planted in there amongst the trees by a wizard!

The real mountain and forestry tracks we followed for five long hours gave us the opportunity to enjoy our kind of an adventure and sense of communing with nature. A real jeep safari away from the civilization and man made modern roads and smack bang in the middle of beautiful Toros Mountains it was indeed.