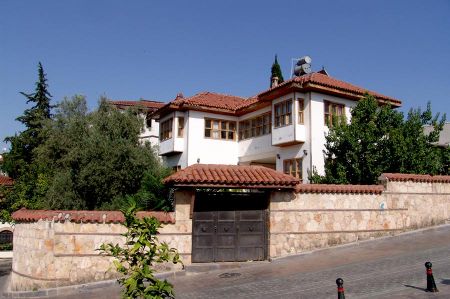 As recent as the seventies, serious plans were underway  to completely demolish the old sector and construct  modern high rise buildings special to big cities instead. Lucky that the necessary funding couldn’t be obtained and no investor was interested in realizing the project. The efforts for protection of the old structures, even so that the area surrounded by the walls would be declared a protected heritage area gained speed towards the end of seventies. Slowly, the investors began to trickle in. They settled at the core of Antalya, opened the pioneering shops, restaurants and cafeterias and therefore contributed to the existing allure and wealth of this sector of the now huge city. Indeed there are still large spaces in the larger picture that are made up of completely ruined structures or in need of restoration. Nevertheless, giant steps have been taken towards protecting the city center of Antalya.

Well then, what does come to mind when we mention of Kaleiçi? Literally translated, it means “The Inner castle”. Kaleiçi is the urban sector that is surrounded by the antique city walls, which was planned and constructed on 150 BC. The founder of the city is King of Pergamum, II. Attalos and he named the city “Attaleia”. II. Attalos subsequently tried to conquer Side to no avail. Soon after, under the hegemony of Roman Emperor Hadrian, the city was renamed Adalia and was granted the status of an independent city with her own governor. Vintage wine has indeed contributed to the city’s fame and enabled fast development of the city. When Adalia was conquered by the Seljuks in 1207, the city fell under the hegemony of Egridir Princes.

A few hundred years go by and Adalia is annexed by Sultan Murad I. Of the Ottoman Empire in 1387. As a consequence of teachings of the Quran, wine yards were kept at a minimum and instead, rose cultivation and silk worm breeding became the principle income source for the city.  Following the defeat in WW1, Italians have occupied the city for a short while and in 1921 the Greek inhabitants of the city were obliged to leave the city, now called Antalya, as a result of the population exchange agreements. The city population stayed around about 40.000 level until the seventies and rapidly increased since than.  The population is thought to be about 1.5 million today. About 2000 of the population are Euro millionaires and there are about 15.000 migrants (half of which are Germans) permanently settled in the city.

Kaleiçi appears to have been cornered by the antique walls, which were adapted and changed throughout its long history. The suburb now overlooks the antique natural harbor, which provides an exit towards the city center. The narrow, cobble stone streets originating from the harbor are almost free of any form of traffic and gently pass amongst superbly renovated structures. We spared our time for a place called “Villa Tulipan“. This place belongs to Bas from the Netherlands. We had a wonderful time in a relaxed family atmosphere. Several hours we savored the surroundings on the marvelous penthouse with a commanding view of the adorable harbor, glistening waters of the Mediterranean at sunset and the overwhelming silhouette of the Taurus Mountains at the background.  In the mean time, Bas outlined the development of the sector in minute detail for he has been involved in the life of Kaleiçi for 20 years now.

Whilst the first visitors of this older sector were apparently back packer travelers, in time those individuals attracted to the cultural make up of the area began frequenting the Kaleiçi. The very first “new” hotel was established by “Dogan the Hotelier” in a building constructed in authentic style. The gradual increase of visiting tourists soon necessitated the opening of more pensions, cafes and restaurants. However, the revival soon attracted many car rental businesses and souvenir shops as well. Once the “All Inclusive Hotels” became the trend in 1998, the atmosphere had become quieter. Indeed, a sudden change in tourism trends resulted in the culture travelers deserting the city. It has not been too long since this trend was reversed, we are informed.

Surely, we will not go without mentioning the “Orient Basar” and Mehmet, the antique and carpet dealer, who is a long time friend of Bas in Kaleiçi. We pay a visit to him to have a chat and some tea. Mehmet has a sack full of stories about the Americans who used to frequent Kaleiçi in the nineties. In those days he says “The American tourists not only contributed to the economy of the area but also helped the products to be sold in the USA”. Currently, although this old sector is attracting more attention worldwide, for example the situation with travelers from USA is almost unknown. Mehmet voices his deepest worries in relation to “all inclusive” type tourism movements as we delve further into conversation about the future of the sector.

Our voyage through the streets of Kaleiçi continues and we come across Santana and his partner Fatma. Hearing perfect German spoken and having heard his distinctive “Frisian Pronunciation” throughout our conversation we are further impressed when we find out that they have operated a Turkish restaurant, which we are familiar with, near Oldenburg. The world is indeed small.

On we move in our discovery voyage through Kaleiçi and stop to talk to Cennet, who has just recently opened a hairstylist shop “Beauty & Coiffeur”. She is one of those who has repatriated from Germany. She has a good background education in her occupation and now wishes to contribute to the cyclic rise of her country. With that in mind she says, rented a small shop in Kaleiçi. Of course she hopes to find favor and increase her client potential in her new shop in this renovated building.

Our voyage through Kaleiçi somehow tickles our senses and we crave for pasta. Indeed we are right in front of “Mamma Rosa”, a charming restaurant specializing in Italian cuisine. Home made, beef Gnocchi and Ricotta Cheese-Spinach ravioli are our preference. Nothing to say but superb food! Our host, Rosanna tells us that she opened Mamma Rosa Restaurant with the help of her husband Fausto and her mother in May 2010. Fausto and Rosanna have a Sicilian background and have lived first in New York and in Costa Rica afterwards and from there they moved to Alexandria and other places she says. The have not settled any where for many years, as true travelers they were. Their common interest in cultural history finally brings to Turkey. When they used to live in Alexandria, they would visit Istanbul and after many visits as such, they realized in Istanbul that they had somehow missed Antalya in their many visits. So they decided to take a short trip to Antalya on the way to Sicily. So they acted on this sudden decision and then...stopped here. That is life in it is starkest reality for you! Rosanna wants to return to Sicily one day but seems like Fausto has not made his mind up as yet.

We come across Michael at the “Safran Sarı” pension, who kindly invites us for a cup of tea. The invitation gives us the opportunity to meet Gülseren, the owner of the pension. She has been one of the members of the public who has been struggling for many years to help protect the older structures in Kaleiçi. She is in close touch with Nejat Üregen, an architect. She is proud to tell us, and rightly so, that they have given new life to some of the old buildings that were almost about to be destroyed. Suffice to say, one feels at home when walking about the narrow streets of the old city. Yes, one feels good in Kaleiçi!

Our last stop is the “Suna & İnan Kıraç” museum. The Director of the museum, Mr. Kayhan Dörtlük welcomes us and invites us to a tour through the library, the Mediterranean Civilizations Research Institute and an exhibition in the building. Following the exhibition area, we move immediately to the Library, which is our primary interest. It is really impressive to find all of those printed international materail on the history of Greeks, Romans and Seljuks. We are told that students from high schools and universities are frequent visitors of the library. Surely, we are invited to make use of the library collections for our own research. The best part to the invitation is of course the “Treasury Room” that is opened for us; here one finds old books about the sector and the region.

We have 408 guests and no members online