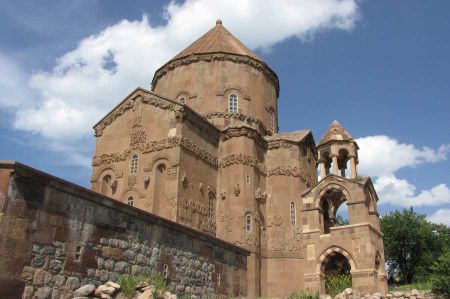 The view on the surface of Lake Van looks like any other large body of water. Turkey's largest lake is located in the Far Eastern region of the country, next to Iran.

The lake has a striking blue color and is still a tourist attraction, in particular the island of the famous monastery church Akdamar, the Holy Cross Church, which also benefits the surrounding towns. But beneath the lake surface is another site that has not been seen for thousands of .

During a recent dive to explore the lake bed, archaeologists from Van Yüzüncü Yil University, along with a team of independent divers, found an underwater fortress dating back to the Urartian Empire about 3,000 years ago (about the 8th and 7th century BC). The Urartian Empire (also called Urartu) was an ancient oriental kingdom around Lake Van in Asia Minor, which later spread to the Urmia and Sewan Basin and the Arax Plain (Turkey, Armenia and Iran). The fortress, made of solid rock, lying underwater at a depth of more than ten meters, is an approximately one square kilometer structure that seems to have sunk. The water level of Lake Van has risen by about 150 meters in recent centuries due to tectonic subsidence.

In an interview with the Turkish news service Andalou Agency, Tahsin Ceylan, head of the diving team, reports that other archaeologists, who are more familiar with the area, told them in advance that they would not be able to find anything special in the water of the lake. Based on local rumors about ancient buildings or ruins, the team continued with its research.

Ceylan told the local press that the archaeological site spans over a mile. The still visible parts of the fortress walls range from 10 to 13 feet in height. Large stones, layered like a brickwork, appear in the picture of the camera. The remaining structures of the fortress range from loose piles of stone to smooth square walls. Based on visual assessments, the archaeologists' team estimates that the remains are around 3000 years old, meaning that they may have been built during the Iron Age era of the Urartian Iron Age.

A stone sculpture of a lion has been found

According to the Department of Middle Eastern Art of the Met, Lake Van was a hub for ancient society. A rock inscription, the oldest documented Urartian record, is in Van. During the underwater research, among other things, a stone sculpture of a lion is said to have been found. Local authorities expect the find to attract the attention of archaeologists and divers from around the world.
Archaeologists and divers plan to further explore the lake in the future to learn more about the ancient remains.