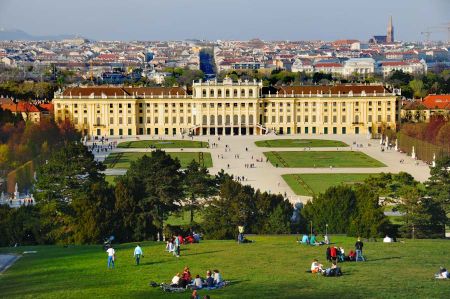 Thus; on one hand it becomes an important political center; on the other hand it becomes one of the most vibrant cultural centers of Europe with the contributions of celebrities and artists like famous composer Mozart, singer Falko, painter Gustav Klimt, architect Otto Wagner, psychologist Alfred Adler and Queen Marie Antoinette.

While you are wandering in the streets of Vienna, which has been named as the most livable city of Europe in last two years, you will notice the aristocratic structure of the city and the superiority of art. During the city center trip, you do not need any kind of transportation vehicle because it is easy to reach everywhere that’s worth to see by walking. You can obtain a Vienna Card by making a plan according to the duration of your vacation. By this means, you can use the public transportation vehicles such as subway and tram whenever you want within the card’s duration. Besides, you have the opportunity of discount in museums, theaters, concerts with shops, restaurants and cafes.

We have been camping at the West Wien Camp site in the west of Vienna, so, Schönbrunn Palace was our first place to visit. Since the palace was used as a summer residence, it is located a little outside the city.
The visitors, whose time is limited, may attend the 22 Rooms tour with a guide because this royal palace has 1441 rooms. The participants of this tour, which is about 30 – 40 minutes, have the opportunity of seeing the luxurious glory of the Great Gallery, the oriental charm at the Chinese cabinets and Franz Joseph’s special suit that surprises with its modest design. The Grand Tour, which is about 50 minutes, is based on the 40 different and impressive stories of 40 rooms that extended for three centuries. The waltz music tones on the walls of palace almost echo in the Great Hall that used for celebrations and ballroom parties.

It is not easy to realize the grandness of the palace by looking from the outside that even the court at the entrance does not reveal the Schönbrunn Palace’s authentic splendor. Every year, Schönbrunn Palace and the Garden that reflect the fancies and interests of the Habsburg emperors, are visited by millions of visitors with its various statues, fountains, Roman Ruin, Gloriette, museums, the zoo, the botanic garden, extravagant gardens that designed in different styles, and more.

The triumphal arch “Gloriette”, which aggrandizes the power of the dynasty, symbolizes the war that was conducted obligatory reasons and led peace. Nowadays, Gloriette gives service as a cafe and presents the beauty of palace with city view. The actual glory of the palace and garden can be viewed from the Neptune Fountain and Gloriette triumphal arch. If you wish, the visit of Schönbrunn Palace may last the whole day. But, if you don’t have much time and want to tour quickly, you have to move quickly.

By the end of monarchy in 1918, the palace, which was the property of the Habsburg dynasty since Maximilan II, became the property of The Republic of Austria. In 1992, the modern limited company of “Schloss Schönbrunn Kultur- und Betriebsges.m.b.H.” that belongs to the Republic of Austria took over the management of the palace. The works of conservation and restoration completely have been financed by this company.

Schönbrunn Palace is one of the cultural treasures of Austria with its brilliant architecture and elegant interior decoration. Along with its historical importance, location and dazzling gardens, Schönbrunn Palace comes at the top of must-see places list in Vienna. The whole palace complex is on the list of UNESCO’s World Cultural Heritage.