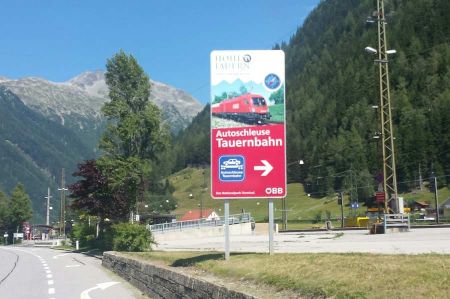 En route to the Caravan Salon 2016 with their motor home, Toni and Alex Zampetas had already arrived in Austria, where they decided to continue their way in using the so called "Car Lock Tauernrail".

As we could see from their first brief report by e-mail, it  is an inexpensive and very relaxing possibility to cross the high Tauern Peaks without yourself driving. Such an additional pause is quite appropriate during the long journey from Thessalonica to Dusseldorf and means an extra break, even if the drivers are changing.

The "Car Lock Tauernrail" connects the Mölltal in Carinthia with the Gastein Valley in Salzburg through the Tauern and is thus an alternative in using the Tauern motorway. Between the two places Böckstein and Mallnitz the possibility of loading the cars on a train already exists since 1920. This so called Car Lock Tauernrail compound is next to the Grossglockner High Alpine Road and the Felbertauerntunnel the third suitable crossing of the Alps between the Brenner Pass and Tauern motorway for cars. Loading is possible from 5:50 am from Mallnitz and 23:20 from Bockstein, the trains run every hour in each direction. The Tauern tunnel is just 8.370m long and the journey with the Car Lock Tauernrail is also only about 12 minutes but despite the time it is very relaxing being away from from driving, thus contributing to the recovery on the long trip from Thessalonica to Dusseldorf.

From 1960 to 2001, the inmates could sit for accelerating the turn-around time in the car, but this is since then prohibited again for safety reasons.

Zampetas clearly liked the interruption, as illustrated in some of the attached images, what can be easily found out.
One should not mix Car Lock Tauernrail with Tauernbahn generally, because here it is merely the portion of the tunnel we are talking about. The name Tauernbahn on other hand refers to the railway line between Schwarzach-St. Veit in Salzburg and Spittal-Millstättersee in Carinthia. This section is part of a major north-south highway in Europe and also serves the tourist development of the Gastein Valley. The Tauernbahn 79 km long and a classic mountain railway. It overcomes the Hohe Tauern with a maximum track gradient of 2.5%. The ridge is traversed in 8.371-meter Tauern Tunnel as part of the auto route Tauernbahn.

History travel in the capital of Arts