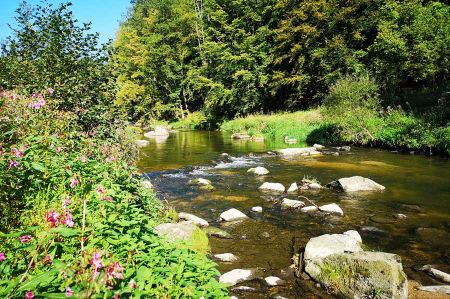 For the non-Austrian, a little introductory explanation: The term “Mühlviertel” is used to describe a landscape in Austria that represents one of the four historical “quarters” of Upper Austria. It is that part of Upper Austria that lies north of the Danube and belongs to the granite and gneiss highlands. 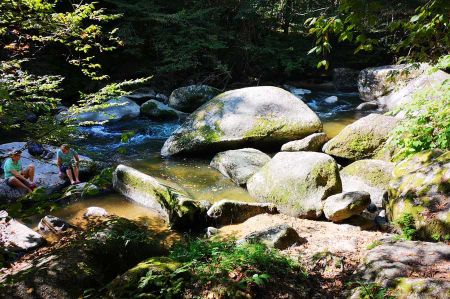 We had driven from Vienna to Mühlviertel, exactly in the direction of Pregarten, to help with a removal and immediately afterwards go on a hike along one of the many river valleys. North of the Danube Valley and in the Sauwald lies the Bohemian Massif, the geologically oldest landscape in Austria. It is an old fold mountain range and consists of the Moldanubic in the western part and the Moravic in the eastern part (outside of Upper Austria). This (named after the Vltava and Danube) is in fact a rock complex consisting exclusively of crystalline; interspersed with large granitoids; today open in the southern part of the Vosges and the Black Forest and especially in the Bohemian Massif south of the Fichtelgebirge and the Egergraben. The Bohemian Massif represents the base of an eroded, former high mountain range (called the basement), which rose up to over 10,000 meters. Further remnants of this mountain formation in Central Europe are also the German low mountain ranges. Acid plutonites such as granite and gneiss dominate.

Mühlviertel - its watercourses lead to the Danube 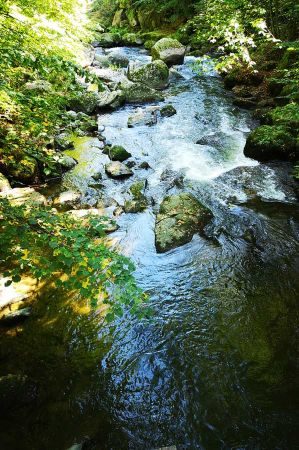 The mountains, which were completely eroded, were probably broken into clods in the course of the alpine mountain formation and lifted somewhat, resulting in its current topography of a hilly country.

The Mühlviertel takes its name from the rivers Große Mühl, Kleine Mühl and Steinerne Mühl that flow through this region. The Mühlviertel in its current terminology has existed since 1779, when the Machlandviertel became part of the Mühlviertel. Since the formation of the political districts in 1868, the quarters in Upper Austria no longer have a legal basis and are purely landscape names. The older district division, which was still based on the old quarters, was replaced. The urban area of Linz north of the Danube (urban districts Urfahr, Pöstlingberg, St.Magdalena and Dornach-Auhof) also belongs to the Mühlviertel.
The Mühlviertel borders Bavaria in the west, southern Bohemia in the north and Lower Austria in the east and south-east. 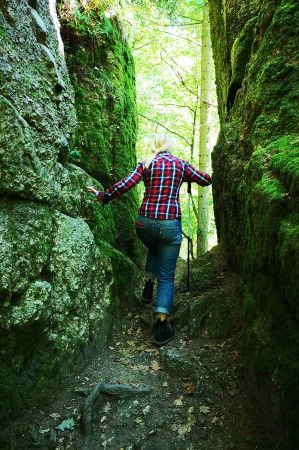 The highest mountain is the Plöckenstein at 1,378 meters in the Austrian Bohemian Forest at the border triangle. In the municipality of St. Nikola an der Donau near Hirschenau, the lowest point in the Mühlviertel is 228 meters.

The only flat zones in the Mühlviertel are between Aschach and Ottensheim (the part of the Eferdinger Basin north of the Danube) and between Mauthausen and Grein (Machland).
Granite and gneiss are the geological subsoil of the Mühlviertel, the rivers and streams flow - with a few exceptions in the northern Mühlviertel, beyond the main European watershed - to the Danube. The Mühlviertel differs significantly from other parts of the country mainly due to its location and its geological subsurface in terms of flora and fauna. Special features in the nature of the Mühlviertel include largely natural flowing waters, Bürstling meadows (nib grass lawn), rock formations (wool sack weathering), moors, otters, lynx and Bohemian gentian.

Waldaist - hiking trails on the natural watercourse of the river 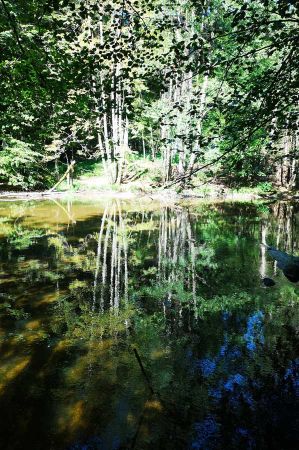 The Waldaist is formed by the union of the rivers Schwarze Aist and Weisse Aist south of Weitersfelden. The two source rivers arise near the border with the Czech Republic between the Freiwald and the Weinsberger Wald. The Waldaist flows in a southerly direction and joins after about 50 km at Schwertberg with the Feldaist to the Aist, which then flows into the Danube near Mauthausen.
Both source rivers arise just next to each other in the municipality of Liebenau at an altitude of about 1,020 meters. While the White Aist flows in a fairly straight line to the south, the Black Aist collects some streams on its much longer path, first north, then west and south, including the Harbe Aist (near Harrachstal), which is in the southern municipal area rises from Sandl. When it joins with the White Aist south of Weitersfelden, the Black Aist carries considerably more water; it is also the longest headwaters of the Aist.
The boggy character of the area around the Schwarzen Aist is responsible for the typical brown color of the river. The White Aist, on the other hand, hardly flows through bog areas, which means that the color of the river is much lighter.
The Waldaist valley is part of the protected Natura 2000 area Waldaist-Naarn. The river pearl mussels and the head are worth protecting. The river pearl mussel occurrence in the Waldaist is the largest in all of Central Europe. The main types of fish in the Waldaist are: brown trout, brook trout, grayling and rainbow trout, which we observed again and again during our hike.
But more on that later.