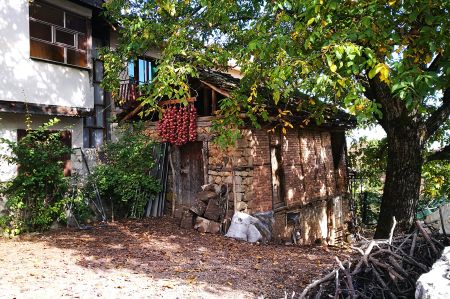 Several times already we had visited the mountain village of Vevčani and yet there are always interesting details to discover, which were simply overlooked so far.

Thus, during the tour through the village, with its narrow streets and the ancient buildings, a cobbled path, which circles around half the village along the stream, was noticeable to us. Certainly a continuation of the footpath is planned for the future.

With its natural park along the river streams, which bubbling out of the ground in an indentation of the mountain train, and are fed all year round from the mountains above Vevčani, the place has created a point of attraction which slowly but steadily recedes importance after the collapse of Yugoslavia. First restaurants and inns, which resume the style of the place, have settled and are also visited. If it is possible to restore the now partly ruined buildings, a path to the future can be created as a tourist-attractive place.

Here, a holistic project planning, perhaps in the direction of an eco-village, would be of decisive importance, especially as the still running grain mill still offers a further attraction and is still used by local residents. If, for example, bread baking is added here as a tourist attraction, a further program point would be established alongside the visit of the grain mill.

Our tour of the village showed us right from the start that such an oriented project as an eco-village has already been widely practiced locally by the local population. Everywhere peppers are torn to dry, garlic and onions are tied to pigtails or hung in large bags , the corn is tied to sheaves in front of the deposits and hay lays in the skiff above the livestock.

If investors were now to be found who would promote the construction and restoration of the old buildings, without the modern more storey hotel buildings, the first steps would be taken. If the historical potential as the outskirts of the Via Egnatia, the mountain hiking trails in wonderful nature are added, a very attractive destination is created, which should of course be released by tourist traffic. But take a look at the pictures!