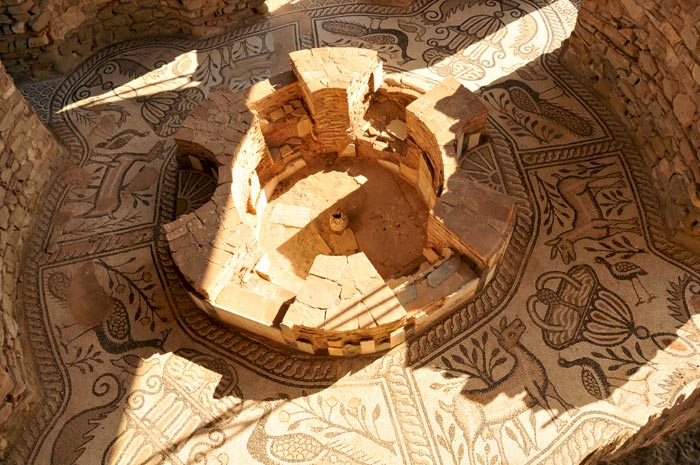 One of the most beautiful experiences of passing Macedonia by vehicle was the visit of Stobi Ancient City near the highway. Goce Pavlovski, who is an archeologist of excavation staff and a representative of the National Institution Stobi, welcomed us at the entrance of the ancient city that we arrived in the afternoon. 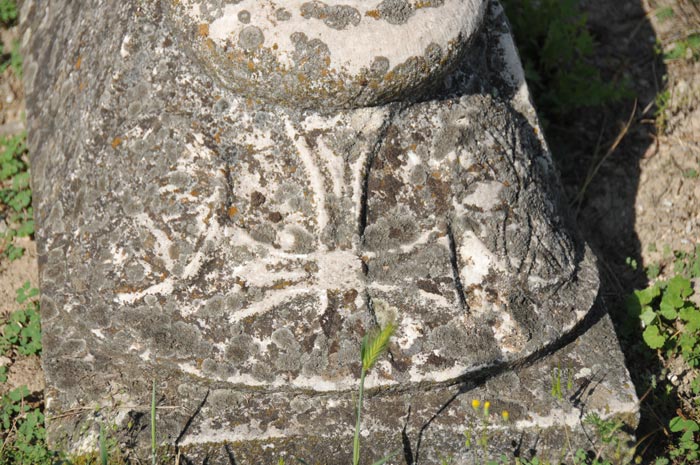 Since we sat in the vehicle during the journey, we would like to go out for a walk among the ruins of the ancient city. Of course, this desire was based on not only our need for a walk, but also our curiosity in the ancient city. 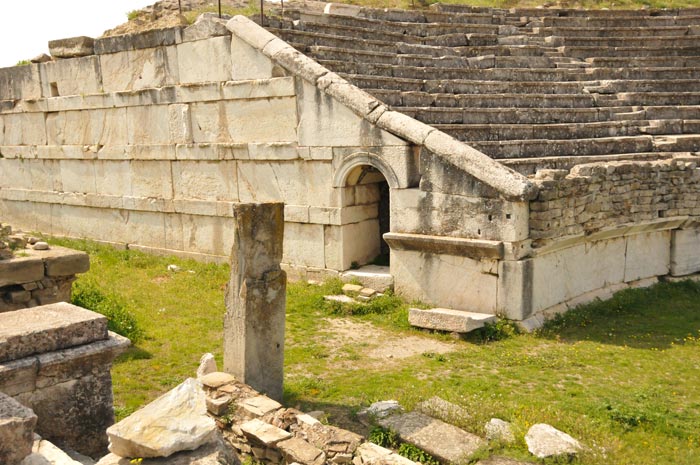 Previously, while we were passing from the highway, we noticed the signboard and arrived in the Stobi Ancient City. But we only made a brief visit the theater and impressed from the remains. Goce was responsible for the excavation works in the theater area and he gave us detailed information about it. 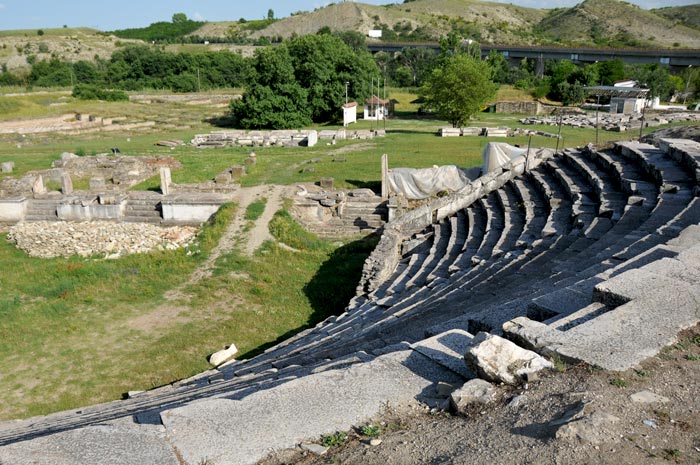 The construction of the theater, which was planned in the 1st century, could not have completed and in the middle of the 2nd century, it started again with a different concept. At the end of the 3rd century because of the destruction that caused by a massive earthquake, renovation and modifications started. At the end of the 4th century, the theater was abandoned completely and used as a quarry. The materials, which were taken from the theater, were used for the construction of the eastern wall. At the 6th century, it became a mound which has modest houses were built on it. 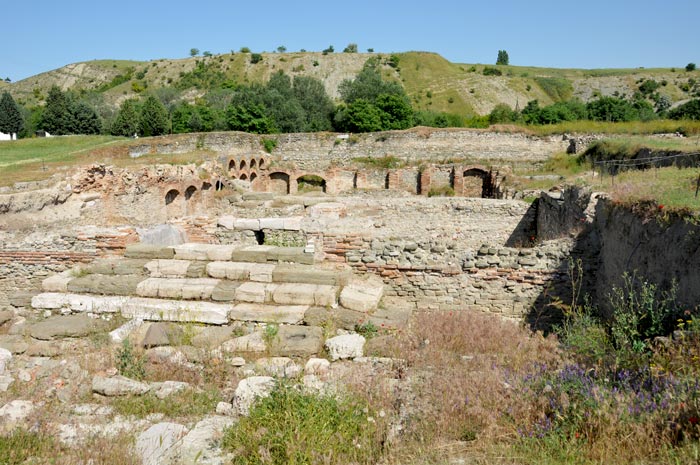 The excavation works in this building, as in other areas, still proceed. The Building with Arches, which was raised in a date between at the end of the 1st century and at the beginning of the 2nd century. It is a very positive circumstance that the building was abandoned after the destruction and it was not used as a construction material resource. The entire of the wall decoration and some architectural elements were found in the area. Even though it was not understood exactly, probably it was used as a huge public building. 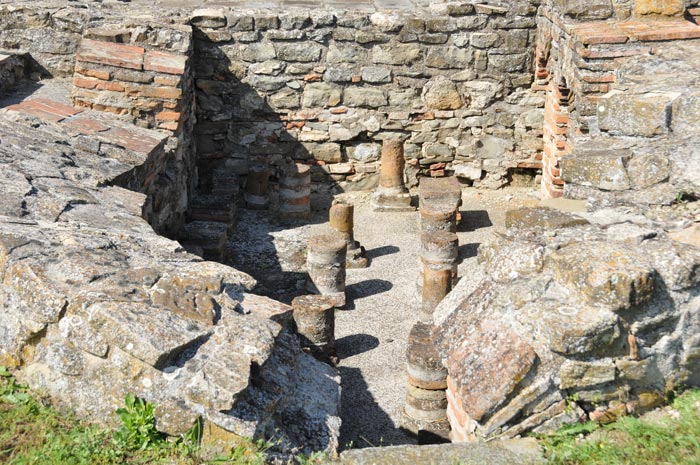 I can state that it is the prettiest part of the ancient city. Unfortunately, the previous excavation works did not leave sufficient evidence about this small Roman bath. Hypocaust – the central heating system can be seen clearly. It is considered that this public bath was used by women. In my opinion, it was definitely used by women because such an adorable bathroom could not be used by men! 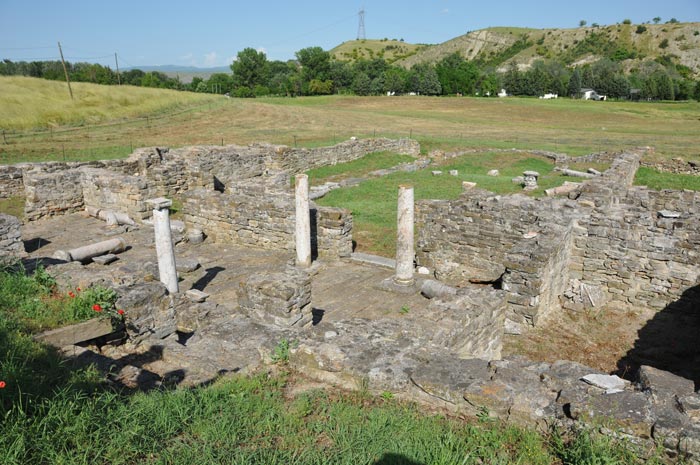 Since it is located at the northward, the church, which has a baptistery, is called as the North Basilica and the excavation works also continue in this area. Next to the church there is the Civil Basilica that does not have any elements of Christianity. In consequence of the excavations in 1970s, layers remaining from the Hellenistic Period were recovered and the area is still in the process of excavation. 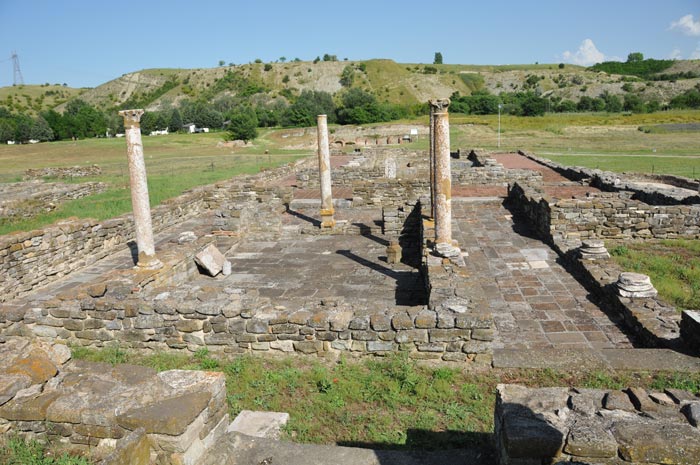 In the 2nd century AD, the first synagogue was constructed in this area that the remains of Hellenistic structures were recovered. After it was demolished, a second synagogue was constructed between the end of the 3rd century and at the beginning of the 4th century. These synagogues are the evidences of the presence of a Jewish group that lived in the area. Most probably at the beginning of the 5th century, basilicas were built on the top of the synagogue layers. 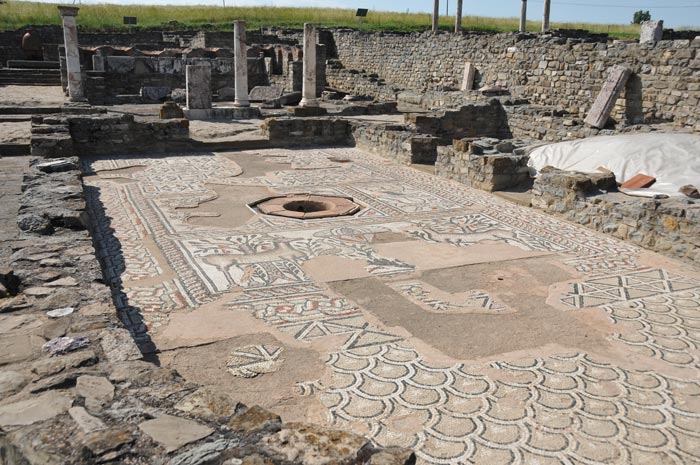 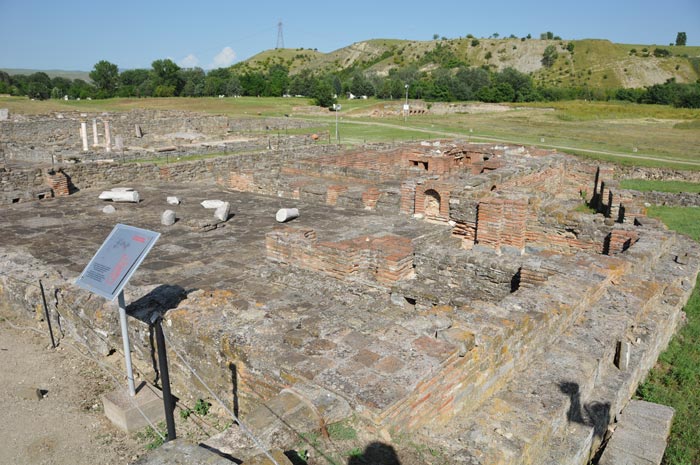 This is the public bath of the ancient city that constructed at the end of the 3rd century. It has an entrance from the Via Axia Street that crosses the main street of the city. From there, it is possible to see the remains of hypocaust tunnels, which is the central heating system of the bath. From the furnace, which was raised above the ground, hot air passes through the tunnels of pillars and with the help of a flue, it is transmitted to the walls of the structure and the ground. It is sad and stunning for us that after the 5th century, this central heating system of Roman invention was forgotten. 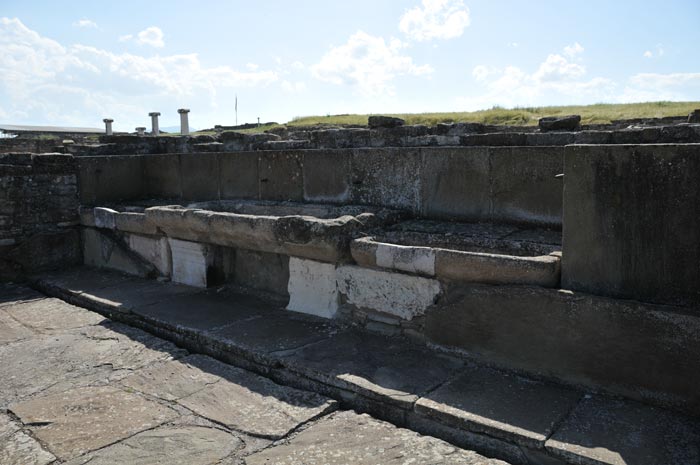 There is a public fountain at the southeast corner of the House of Peristeria that was built with the materials used in old structures. It is at the crossing point of two streets. At that time, water was provided from a closed tunnel under the main street to the fountain and bath. 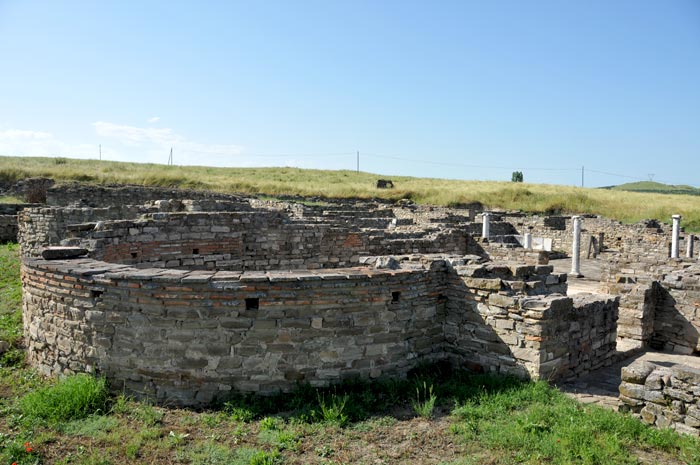 The House of Peristeria, which is located at the city center, is surrounded by the streets on the four sides. According to the information that obtained up to now, the house is regarded as a complex that has at least two floors and many rooms. The semicircle-designed large rooms, which are seen in the photograph, are estimated as the dining room for the guests. 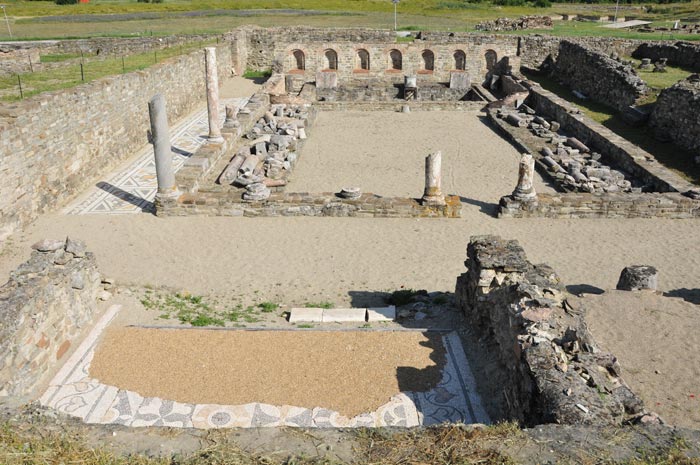 Located at the heart of Stobi, between the two parallel main streets, The Theodosian Palace was named by the assumption that during his visit of Stobi in 388 AD, the emperor Theodosius I was hosted here. The most charming area of the palace must be the northern part. A large hall was surrounded by columns and floors of the corridors were covered with various figures in the mosaics. 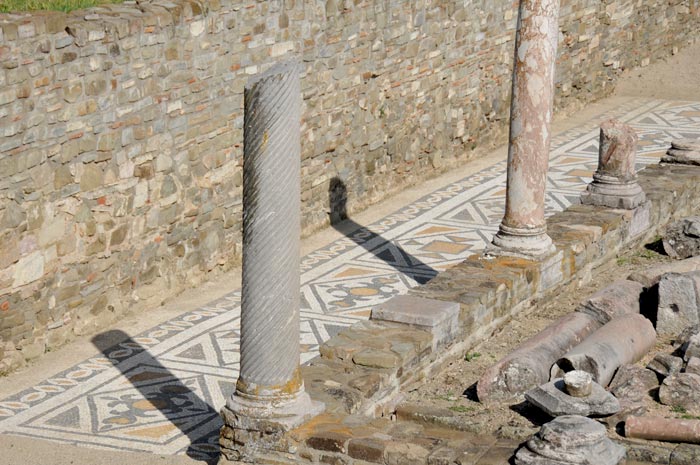 The excavation team encountered with mosaics and depictions on the other structures. After them, the conservation team stepped in and took these mosaics under protection immediately. It is such a job that requires attention and slightness and it is not easy to guess how much time takes to locate the mosaics in places after the conservation. According to Goce’s estimation, the mosaics that have been recovered up to now, will be placed into original spaces again in the middle of 2015. I am looking forward to seeing them. 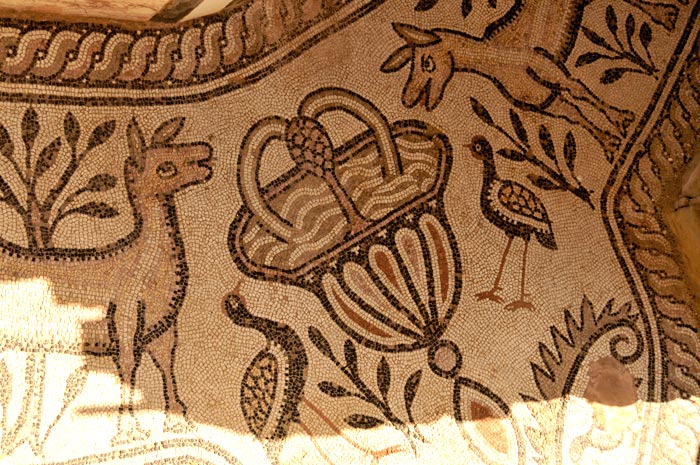 The Episcopal Basilica, which is the most important Christianity structure in the city of Stobi, is situated at the west of the theater and its existence can be followed in two different periods. For me, the baptistery is the most attractive part of the basilica that you can see it in the photograph. The floor mosaics that I saw on the brochure and waited impatiently, are very impressive. The mosaic floor, which portrays a story from the Psalm, was decorated with a deer and peacocks that flanking a kantharos which is an ancient greek vessel usually made of clay or bronze used for drinking wine during the Classical and Hellenistic period. During the Roman period there were large marble kantharoi made probably for decoration in elaborate buildings.

The large marble kantharos in the Baptistery of the Episcopal Basilica originally belonged to an earlier building and it was placed in the church in the 6th century. Its purpose was baptism of children because it was unpleasant to immerse them in the piscina (the pool in the middle) where adults were baptized. 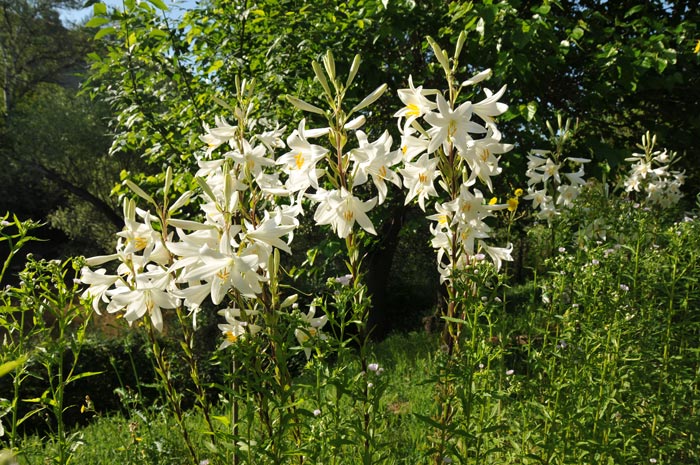 After being informed by the archeologist Goce Pavlovski, who is one of the team members under the management of archeologist Silvana Blazevska, we had dinner with the staff in the evening. It was a marvelous night with the hospitable excavation team of Stobi. In the morning we gathered together with them again for a coffee and continued our conversation with new arrivals. I can say that we have friends who are connected to the Stobi Ancient City of Macedonia from the heart. 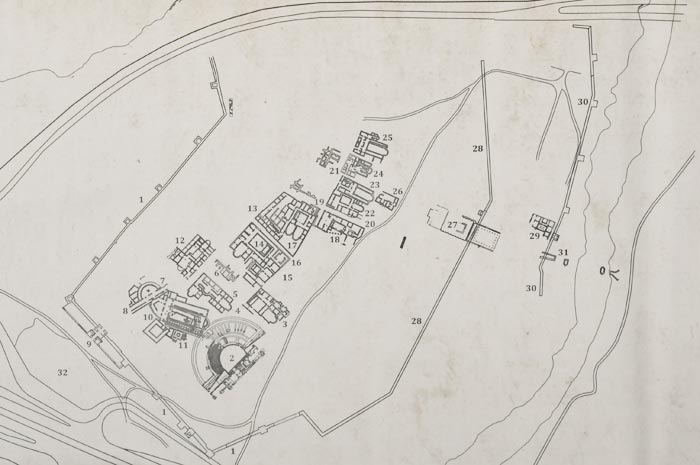