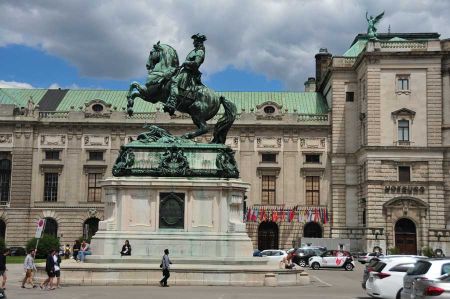 Once again we took the tram into the city center of Vienna, leaving the tram at Vienna State Opera. This time, our exploration tour was to include the Vienna Hofburg and the museums housed in it, where our special interest was directed to the Ephesus Museum.

The background of this hopefully finally overcome disputes grown between the Archaeological Institute of Austria with Turkey for the continuation of the excavations in Ephesus, near Izmir (we had reported about it).

The Hofburg in Vienna was the residence of the Habsburgs clan in Vienna from the 13th century until after the First World War in 1918. Since 1945 it is the official residence of the Austrian Federal President. It houses the largest part of the Austrian National Library as well as various museums (including the Albertina) and the Federal Monuments Office. The irregular building complex, which has grown over the course of about seven centuries, comprises not only the museums but also two sacred buildings: the Hofburgkapelle and the Augustinerkirche.

The defense towers and ditches of the Hofburg have disappeared 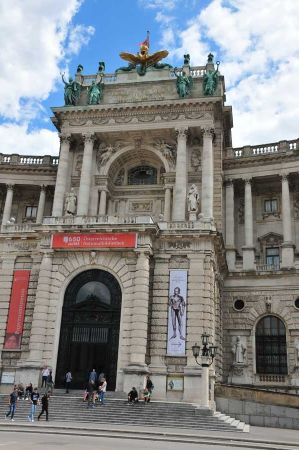 Under the Habsburg King Rudolf I, first documented in 1279, the beginning of construction in the first half of the 13th century under the Babenbergern started. The first expansion took place under the Bohemian King Ottokar II Přemysl. The complex - anything but a prestigious residence - was once part of Vienna's city fortifications, with its defensive towers and ditches.

When Emperor Ferdinand I moved his residence to Vienna in the middle of the 16th century, the expansion began and the castle became Hofburg. Existing tracts were modernized and many new ones were added, a tradition that continues to this day. Thus, a tour of the Hofburg is also a tour through the history of building arts in Austria: tracts of various eras, from medieval Gothic to Renaissance, Baroque from the 17th and 18th centuries, but also the historic wing from the 19th century to contemporary interiors from the 20th and 21st Century fit together.

The museums in the Hofburg of Vienna 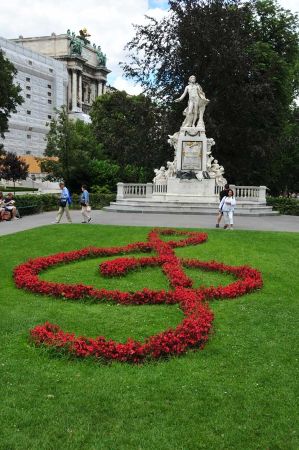 Various areas of the Hofburg are now accessible to the general public as museums. However, they are not all under the same administration and understandably provide extensive information to various stakeholders:
• The Imperial Apartments, the Sisi Museum and the Silver Collection are among the most visited sites in Austrian history. From the former residence of Habsburgs are still the original official and living quarters of Emperor Franz Joseph and Empress Elisabeth to visit. The Sisi Museum brings the visitor close to myth and truth about Empress Elisabeth ("Sisi") in a lavishly staged manner. The former Hofsilber- and Tafelkammer presents valuable porcelain, glass and silver services from the possession of the Habsburg family.

The Austrian imperial insignia are in the treasury. The Palais Erzherzog Albrecht completes the architectural ensemble of the Hofburg in the southern part.
• The Imperial Treasury consists of the Secular and the Spiritual Treasury. It houses the insignia of the Austrian Hereditary Homage, the Empire of Austria, the Holy Roman Empire, the Order of the Golden Fleece, the Burgundian Heritage and the Habsburg-Lorraine House Treasure. The Treasury is a department of the Kunsthistorisches Museum.
• The Spanish Riding School is not a museum, but offers guided tours and performances in the Winter Riding School and the Stallburg. There are smaller showcases in the visitor area that illustrate the history of the riding school.

The Neue Burg houses the Hofjagd- and Rüstkammer, the collection of old musical instruments, the Weltmuseum Wien (formerly Museum of Ethnology), the Ephesus Museum and the Papyrus Collection and Papyrus Museum Vienna. Reading rooms of the Austrian National Library are also located there, too.
The Treasury, the Ephesus Museum, the collection of musical instruments and the Court Hunt and Armory are under the administration of the Kunsthistorisches Museum.
• The court library with its ceremonial hall at Josefsplatz is open to the public. It is managed by the National Library, which is also responsible for the papyrus collection in the New Castle.
• The Palais Erzherzog Albrecht is counted among the building complex of the Hofburg. The graphic collection Albertina is located here, the state rooms of the Habsburgs are also to visit. In the basement of the palace is the Austrian Film Museum.