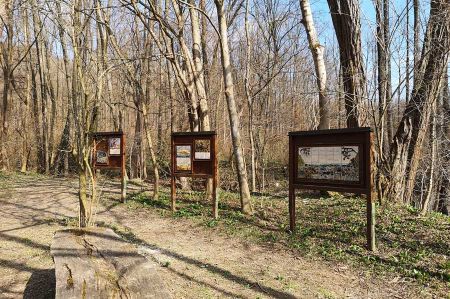 With its 6.3 kilometres, Halterbach is the 2nd longest stream in Vienna, which flows through the suburb of Hütteldorf in which the Camping Wien West is located, too.

Open all year round, we have grown in contact with the city of Vienna, the campsite and its employees over the years, so that we are very happy to be on site. It is only a few hundred meters from here to the Vienna Forest with its wonderful hiking routes, mountain bike trails and almost always green nature (when, we do not remember, was the last winter with really snow?). 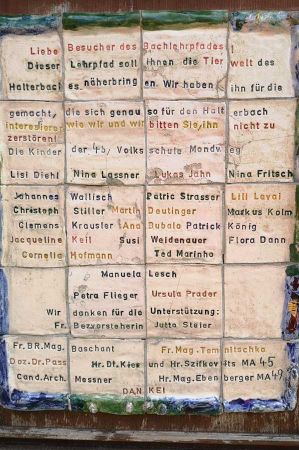 The Halterbach is a small, above-ground but strongly regulated stream that rises at the foot of the Sophienalpe at the Rieglerhütte and then flows south along Karl-Bekehrty-Straße. Further down through the Jägerwaldsiedlung and from there further south along Hüttelbergstraße until it finally flows into the Vienna river. Work had always been done on the stream to reduce or even avoid flooding, which often had the opposite effect. In 1989, the concrete bed of the Halterbach, which was created in the meantime, was filled with soil and lot of trees were planted.

The Halterbach is one of the few Wienerwald streams that run above ground in their full length, although not with its original total amount of water. On its left side there is a collecting channel at a depth of 4 to 6 meters, which ends at Amundsenstrasse. The canal with a length of 2.374 meters was built between 1900 and 1909, the last part in 1949/50. These structural measures were necessary in order to get a grip on the flood problem once and for all, because according to an information board, the Halterbach flows 29,000 litres of water per second in the event of flooding. 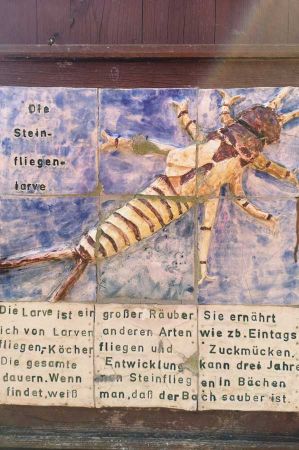 During one of our frequent walks we were on the Halterbach up to the Sophienalpe when we came across the display boards shown in the pictures, which were probably created by pupils in the course of the renaturation of the stream. After years in the concrete bed, the renaturation had ensured that not only plants and birds could recapture this creek habitat, but also numerous water insects and small animals had now settled here permanently.

In order to bring passers-by closer to life in an almost natural stream, schoolchildren had painstakingly created display boards from pottery shards that had been burned and glazed for better durability. Written explanations and images of animals were drawn into the clay with great difficulty, animal bodies were modulated and embossed, which were then burned in a first burning process. In the second step, the paints were applied, which were then fired with the glaze to form a weatherproof coating.

Hats off to this pedagogically valuable work, which can give so many hikers a permanent insight into “life” at a creek. Thanks to the students and teachers - something special was created here.