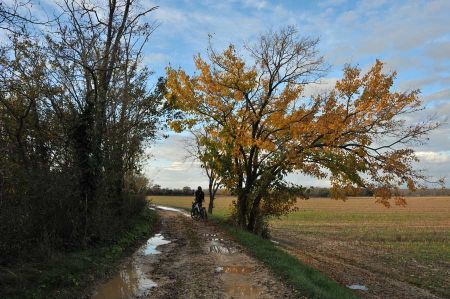 After heavy rain showers of the last days there was something like blue sky and sunshine once again and thus weather conditions for a bicycle tour given.

We had planned to explore the estuarine delta of the Insonzo River, which extends far more then the municipalities of Staranzano, Fiumicello, Grado and San Canzian d'I, an area of ​​about 2,350 hectares and at least 15 kilometers along the mouth of the Isonzo.

Despite the upswing that has also affected ecotourism in many parts of Italy, the expansion of the cycle path network in Italy is on the right path, but by no means as well implemented as in Germany, Denmark, Holland and Switzerland. Although there are is large number of cycle paths in the nature reserve, which also makes use of already existing dirt roads in the connection (why not), the access to the nature reserve on the Isonzo is far from being developed with cycle paths. Means we checked closely at the road network and chose roads with as little traffic as possible, which should prove as a good choice. 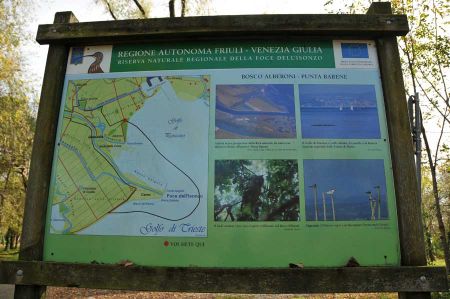 From the camper place in Staranzano, by the way, the Camper Club "La Foce dell'Isonzo" cared for and maintained, we drove into the center of Staranzano. Unfortunately, there is a small section along the road without bike path. Continue along Via Nazario Saura to Via Brasizza and Via Grapetta, which leads through fields and meadows on the outskirts of Monfalcone. Everything seemed fine until we came to the unfortunately closed bridge crossing the Canale Navigabile. Turning back and now along right on the outskirts of Monfalcone on the Via Bagni Nuova towards the coast. We take the opportunity to visit the port of Monfalcone.

Then we went along the Canale Navigabile to the closed bridge, where we could turn left again on the Via Grapetta our way towards the coast to the parking lot Lido di Staranzano continue. Here begins the cycle path through the nature reserve Foce dell`Isonzo, which we now followed. 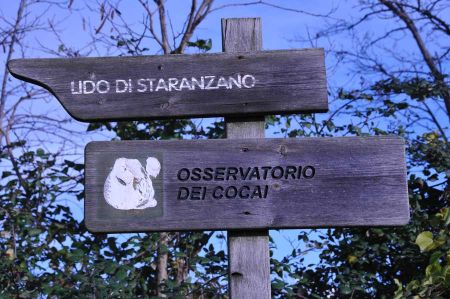 The reserve contains many unique habitats for plants and animals. Thanks to the numerous conversations, protection and restoration measures, the reserve is an ideal place to observe plants and animals (home to more than 300 bird species, for example) and to enjoy the diversity and richness of nature. A little later we should also get to know the heart of the nature reserve, the island of Cona, but more on that later. Often observation points were set up behind wooden palisades, equipped with openings for binoculars or telephoto lenses, in order to be able to observe especially birds without disturbing the animals.

In the meantime we arrived at the Canale Quarantia, which partly runs parallel to the Isonzo. Here the path leads along the protective dike along the watercourse, one encounters fishermen who have dug in almost small harbors the same moorings in front of the fishermen's huts, idyllic fishing huts and sun-drying nets. Time seems to have stopped here. There are small islands in the Canale Quarantia, then alluvial zone, then forest, which seems almost impenetrable. At the many bent trees is clearly visible that it must have just given a flood. 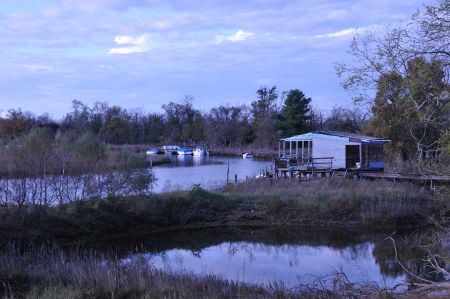 Now there is a sharp bend to the left that leads over the protective dike and we have arrived in the flooded area of the Isonzo. Even the road signs are still blocking the road, but an oncoming cyclist signals the free ride to the Isola della Cona peninsula. We drive to the end of the road, where we meet the excursion hut "Escursionistico Isola della Cona", the destination of our today's tour through the alluvial soil and the nature reserve of the Isonzo. Time has gone too far to visit the visitor center today. Too much time we had lost by the detour due to the locked bridge. But we will be back.

With the hope of another, rain-free day, we return to the camper place after about 35 kilometers of cycling, taking photos and watching.