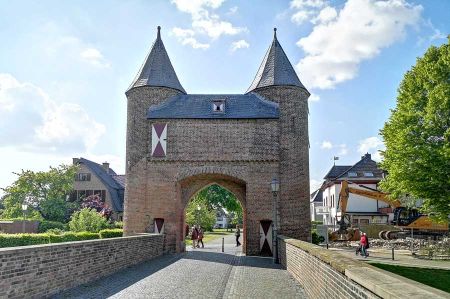 The vast area outside the city of Xanten, which we pass on our bikes after leaving the city gate, testifies the Roman past, especially the Xanten Archaeological Park (APX) and the Birten Amphitheater.

The APX, as the park is called by the locals, is the partial reconstruction of the Roman Colonia Ulpia Traiana, rebuilt already in 275 and rebuilt as Tricensimae, but much of it is still hidden in the vast terrain. Other parts of the APX are the remnants of the "Great Spa", now inside the park and covered by a glass-and-steel construction, and the Roman Museum, which mostly contains finds from Xanten's Roman history. The amphitheater in Birten represents the only reconstructed part of the veteran camp Vetera. We cycle along the APX on the old railway track converted into a cycle track to a section of the Roman-Lippe-Route. 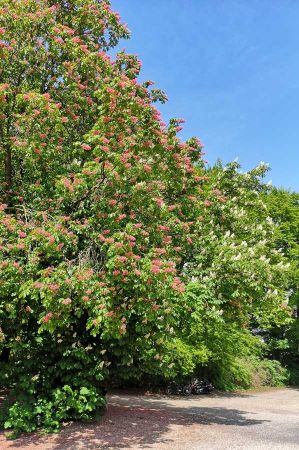 The Römer-Lippe-Route is a 479 km long river cycle route in North Rhine-Westphalia, which was opened in April 2013. The route leads from Hermann's Monument at Detmold along the Lippe (Lippia) to Xanten on the Lower Rhine and thus tries to trace the route of the Roman legions involved in the Battle of Varus (although according to the latest findings the battle did not take place at Detmold). This is the reason why the name Römer-Lippe-Route is based. The "Römer-Lippe-Route" is the successor cycle route of the Roman route. The total of 479 km lead on the 295 km long main route and a further 184 km on 12 thematic loop roads with topics such as water experience and Roman culture in greater detail. But the aspect of nature, too, comes to the fore even during the impressions on the way: A chestnut in bloom with red and white flowers on one trunk.

In large parts, the route runs along the meander of the river Lippe and a former military road of the Romans, which dates from 12 BC. to serve until 16 AD to secure the lip as a shipping route and to conquer the right bank of the Rhine Germania. Starting point or end point, depending on the entrance to the route, is the Hermanns Monument in Detmold. Other Roman camps along the routes, for those interested in Roman history, were detected in Bergkamen-Oberaden, in Olfen, in Haltern am See, in Holsterhausen, in Anreppen as well as in the province of Germania inferior Legion Camp Vetera near Xanten. 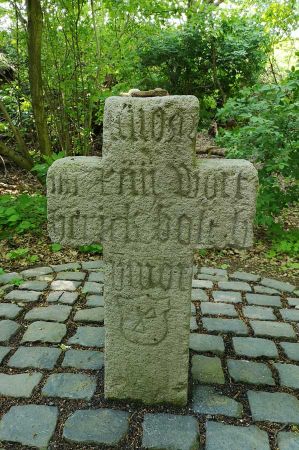 One of the above-mentioned loop-off begins at the end point of the Roman-Lippe route and leads among others through the landscape of Sonsbecker Switzerland, a ridge of the former uptight moraine from one of the last ice ages. We meet stations on the way that provide information about the settlement history of the Colonia Ulpia Traiana, not just about the Roman cultural history. Today it is known that the water supply of Colonia Ulpia Traiana was obtained in part from sources of the Sonsbecker Heights and transported by water pipes with a distance of about 9 km to the ancient city.

Already during antiquity, Romans laid a watchtower on the Balberg in Sonsbecker Switzerland to secure the military road between Vetera (near today's Xanten) and Blerick (Netherlands). Later, this was expanded to a military and residential castle of the counts and dukes from Cleves. The round tower built in 1417 is preserved to this day and probably bears the name "Roman tower" due to the reference to its prehistory.

Some comments on the cycle route Römer-Lippe 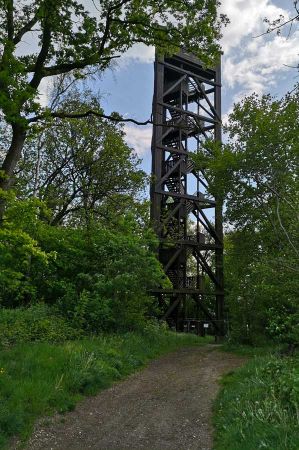 During the first few miles on the sections of the route we have chosen, the Roman-Lippe route is relatively flat and easy to cycle, the route profile shows a relatively simple elevation profile at all. Just on the first kilometers of the route between the Hermanns Monument and Bad Lippspringe are a few inclines to be overcome when crossing the Teutoburg Forest. Later, the route runs through the floodplains of the Lippe largely flat.

The route is signposted in both directions. Small slopes and easy-to-drive paths make the route family-friendly; important sights, historical town centers, museums as well as thermal and fun baths and other recreational facilities along the wayside make the route not only scenic interesting. When traveling the entire route, it is recommended to drive from the east (Detmold) to the west (Xanten), because after crossing the Teutoburg Forest, no serious inclines will occur. The route mainly runs on separately guided and car-free paths, the surface of which is predominantly paved or covered with water-repellent gravel.

The route is indicated by a white helmet on red / blue ground on a square shield; the helmet stands for the Romans, while the lip is represented by a stylized blue river. In addition, the “Loops” have been marked by their own colors. To show it impressively, the sign of the "water adventure loop" is completely in blue and the sign "Roman culture loop" completely in red. At crossing points with other routes are red and white arrows with mileage and place information, as well as the pictogram of the "Roman Lippe -Route".