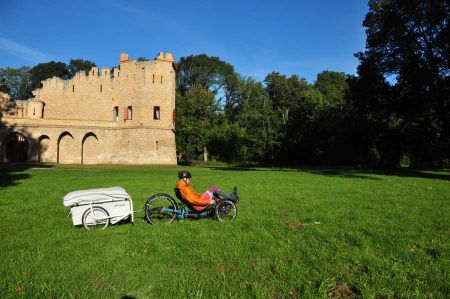 In our report about the cycling routes in the Lednice region we had already announced another report on the used recumbent bike of AZUB, whose manager had made this test trip possible for us.

Certainly not unknown for many years as a means of transportation, the recumbent trike is still an absolute eye-catcher. Especially the increasing electrification of the last years, has made further and new developments possible, which are usually built within two different basic types. The most widespread is the design of the type "Tadpole" with two steered wheels in front and a driven wheel in the back. The somewhat rarer design with two wheels at the rear and a steered front wheel is called "Delta". With Delta types usually one of the rear wheels is driven, rarely both rear wheels (then with differential gear) or even the front wheel. This should be enough about rough classification of recumbent trikes tricycles.

A major advantage of the recumbent tricycle compared to the two-wheeled, single-track recumbent is the high stability, the increased braking power and the ability to install an all-round panel to reduce wind resistance and weather protection. Furthermore, the high tipping safety - even in the state - particularly advantageous for toddler transport by means of child seat. It also allows slow driving without the driver having to focus on balance and making snaking lines; This is a clear advantage especially uphill. Disadvantages are the higher weight, the slightly higher rolling resistance and the greater width. In city traffic, the low seating position may be a disadvantage on some models. Since recumbents as three-lane vehicles are generally not so easy to steer around bumps, uneven roads are often associated with inconvenience to the driver, but which can be significantly reduced by using so-called balloon tires or a suspension. 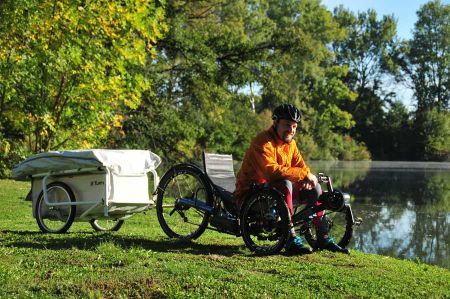 The now used AZUB recumbent tricycle according belongs to the already mentioned types to the group of the Tadpole Trikes with two steered front wheels and the driven wheel behind. The sitting or lying position for us was a bit like getting used to the first moment, but quickly showed the comfortable net or shell seat in comparison with a conventional saddle as very comfortable. The front-mounted bottom bracket and the pedals are also getting used to, but are no more difficult to use than ordinary bicycles.

Quickly, the feeling of a very relaxed posture, as neither the wrists nor the arms, the shoulder girdle and back are loaded. The hands relaxed include the handlebar levers on which the brakes are mounted, a support of the upper body as in the ordinary bicycle is not necessary. The neck muscles are relaxed, as a constant upward-looking, as in the conventional bicycle, is eliminated. We have the feeling that we can look straight forward in natural neck posture.

Honza explains very impressively, that the recumbent spine is in a relaxed position. Physicians have proven that it can even regenerate the intervertebral discs in the optimal case. In addition, the pressure of the saddle especially on the tailbone, so that neither pressure and chafing in the buttocks and crotch area arise, nor are important nerves trapped in this area. Of course, contributing to the comfortable ride and the single wheel damping it is not insignificant.

Optimum power transmission even without electrification 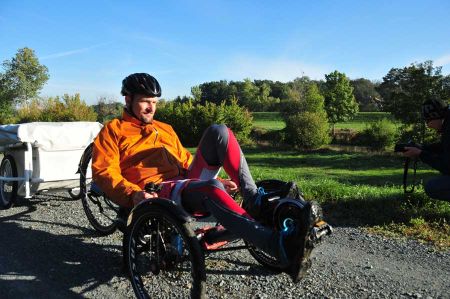 In general, recumbents, by supporting the pelvis and the upper body at the backrest, allow significant forces to be applied to the pedal without the need for a corresponding active counterforce to be built up by the arms and upper body. This strength and the fatigue-free sitting position avoid any muscle work that does not directly serve the propulsion. Of course, the supportive power of the electric motor comes into its own on the gradients that we drive, especially since an automatic clutch gearbox was installed too at our model, so that it is no longer necessary to manually shift the gears.

In principle, about 20 to 30% of the air resistance compared to normal bikes thanks to the high-lying legs, so Honza explains us the lower air resistance. In addition, resulting from the extended seating position and the smaller face less braking air vortex, which has a lower suction behind the driver, results. In the level and downhill this allows much higher speeds than a conventional road bike. This does not apply to inclines, because at low speeds the air resistance is negligible.

More safety and less health risk in the event of accidents 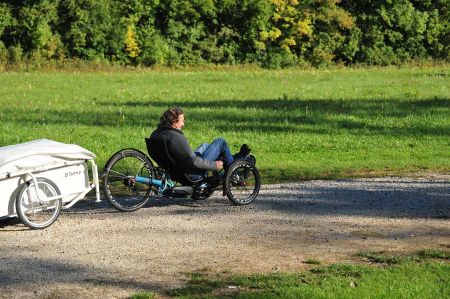 We were also impressed by the excellent braking performance of the trike, because the power transmission of the hand lever on the two disc brakes can be very well metered, with more power, the braking distance is correspondingly short without blocking the wheels. Since the center of gravity of most recumbents is significantly lower than conventional bicycles and at the same time the wheelbase is significantly longer, it is very unlikely that you descend on a full braking on the handlebars. Both components together prevent rollovers due to blocked front wheels very effectively. Even in the event of an impact on an obstacle, the consequences for recumbent cyclists are less severe. In both cases, the heaviest head and spine injuries can result in conventional wheels if the rider bounces head-first on an obstacle. The stretched-out posture with the feet first causes the recumbent rider to bounce, not with his head, but with his feet. The lower drop height also reduces the risk of injury at low speeds.

Our conclusion despite relatively short testing phase: Very comfortable biking due to good damping tuning, so that even larger potholes can be mastered easily without being shaken too much. The electrical support is a great help especially on slopes and especially if, as in our case, the 26 kilogram BTurtle is still attached. We quickly got used to the really relaxed driving.

Neuharlingersiel - a colourful fishing port i…