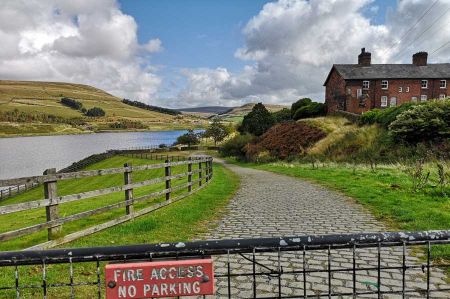 After our friend Paul's visit, we drove to Glossop campsite and had our equipment ready to spend the afternoon on the Longdendale Trail.

The Longdendale Trail is part of an English long-distance hiking and cycling route that largely follows the former Woodhead railway line, which ran between Manchester and Sheffield from 1981 and finishes east of Hadfield. This long-distance trail has just relatively flat slopes and a predominantly smooth surface, which makes it very popular with families and cyclists. An excellent route also for the BTurtle, especially since there are numerous campsites, country restaurants and pubs along the wayside.

The trail, which opened in May 1992, is also part of the longer Trans Pennine Trail, NCR 62, which runs from coast to coast across the UK (Liverpool to Hull). This trail is a turn part of the European long-distance trail E8, which leads 4,700 kilometers from Cork in Ireland to Istanbul in Turkey. 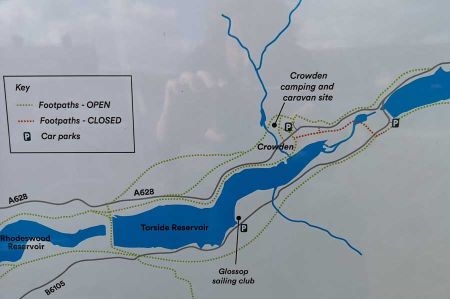 The Woodhead line was a railway line between Sheffield, Penistone and Manchester in the north of England. A key feature of the route is the passage among the bogs of the northern Peak District through the Woodhead tunnels. The route was electrified in 1953 and closed in 1981 between Hadfield and Penistone.

The railway section from Manchester to Glossop / Hadfield is still in operation. East of the Pennines Mountains, in the vicinity of Penistone and the section from Sheffield to Deepcar are still open, though the latter cargo is for goods only. The track has been raised on other sections and much of the trackbed is now part of the Trans-Pennine Trail and National Cycle Route 62. The Woodhead route has gained cult status among collectors of railroad memorabilia. 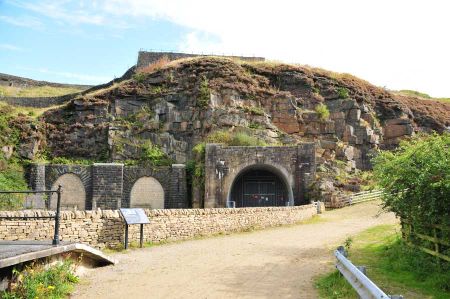 The Woodhead Tunnels are three parallel 4.8 km long railway tunnels on the Woodhead Line, a former mainline link from Manchester to Sheffield in the north of England. The west portals of the tunnels are located at Woodhead in Derbyshire and the east portals at Dunford Bridge near Penistone in South Yorkshire.

The first tunnel, Woodhead 1, was built by the Sheffield Ashton-under-Lyne and Manchester Railway. The construction of the tunnel began in 1837. It was designed by the railway engineer Charles Vignoles, who was later replaced by civil engineer Joseph Locke. When Woodhead 1 opened in 1845, it was one of the longest railway tunnels in the world and the first Trans-Pennine tunnel.

Woodhead 2 was completed in 1853. Both tunnels were exposed to heavy traffic. Due to their narrowness and heavy traffic, they were difficult to maintain. An estimated 250 trains per day went in both directions. Since both tunnels were too narrow to allow electrification, the construction of a third tunnel was decided in the 1950s. Woodhead 3 opened in 1953, almost 100 years after Woodhead 2. Traffic on the line decreased. In 1970, the last passenger traffic went through the tunnel, and the last train went through in 1981, when it was closed. Thus, despite massive protests of the population until today, the tunnels are closed.

The tunnels have been serviced for years but used for other purposes. They belong to National Grid plc, which installed 1 and 2 power cables in Woodhead and installed 3 more controversial cables in Woodhead in 2008, which caused difficulties in restoring rail traffic. An extensive campaign resisted.

Shortcoming: The way from the campsite to the entrance to the trail unfortunately still leads along a busy country road. By crossing this road down to the first artificial lake, you will feel pure nature and thus pure silence and green.