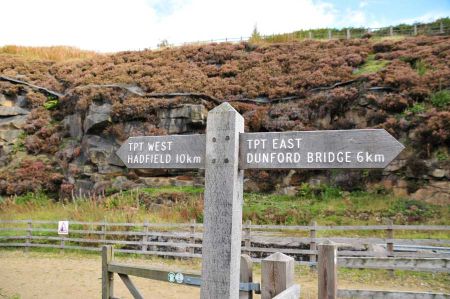 Now we had covered a first section of the Longdendale Trail, we had reached the Woodhead Tunnel via EBike between the gentle slopes of the Shelf Moors and the reservoirs.

High above the historic tunnels, the street noise of the busy highway was clearly audible at this point, but do not worry, just after passing the tunnel it becomes increasingly quiet until just the wind can be heard.

A few more information on how to get there passing this fantastic landscape of the moor in advance: Coming from Sheffield, we crossed the Shelf Moor following the hills of Bleaklow, then descended through the so-called Doctor's Gate to Old Glossop. Here we had our appointments, then we continued to the campsite. The valley Doctor's Gate had been used by the Romans for the construction of a road already. Bleaklow is a tall, mostly peat-covered Gritstone moorland just north of Kinder Scout on the other side of the Snake Pass (A57) on the Derbyshire High Peak near the town of Glossop. Much of the bog is almost 610 meters above sea level and the shallow bowl of the Swains Greave on its east side is the source of the Derwent River. 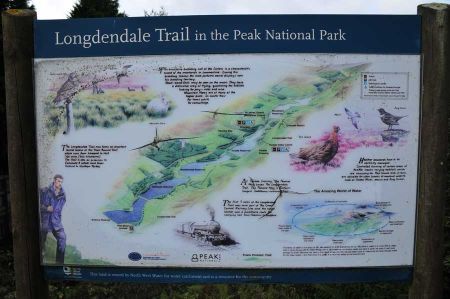 Further up the northern slope of Holden Clough and Hurst Brook is the well-known A57 road, winding to the Snake Pass. The Snake Pass crosses the Pennine Way near Doctor's Gate Culvert (1,680 feet above sea level) before descending eastward to the Ladybower Reservoir along the north side of the Ashop Valley. Here a road leads east over Hallam Moor to Sheffield and south along the river Derwent to Baslow and Matlock. To the north of Glossop is Tintwistle. The river Etherov forms the border. Today, the Longdendale Valley forms a chain of reservoirs that provide drinking water to Manchester. At the top of the valley is Woodhead, where the road from Huddersfield merges into the road to Sheffield, and the nearly five-kilometer-long railway tunnels already described cover the railroad from Penistone to Sheffield.

Bleaklow Head (633 m) is characterized by a huge pile of stones and also the highest point on the west side of the moor. It is one of three peaks on this plateau more than 2,000 feet, the others are Bleaklow Stones, about 3 km east along an indeterminate ridge, and Higher Shelf Stones, about 1.5 km south of Bleaklow Head. At 633 meters, Bleaklow is the second highest point in Derbyshire and also includes the easternmost point in the British Isles.

Creek of the Etherow - along the route of the Longdendale Trail 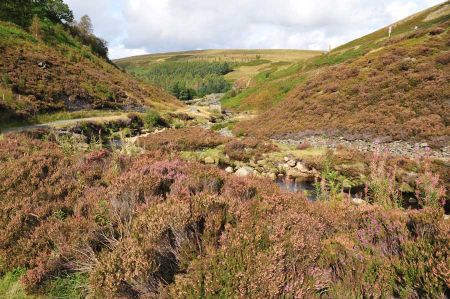 We had looked extensively at the mighty entrance arches into the Bleaklow tunnels as monuments to the industrialization of the eighteenth century, and were more than astonished at the numbers of trains that once crossed here, at least 250 trains a day. Too bad that you could not go into the tunnels anymore. Now we continue our way, drove along the stream for a while, which was dammed in some places and caused us again and again to stop by his splashing and the rock formations. The almost brownish water clearly showed its origin, holding typical bog water.

We were also astonished by the huge fern areas, where the ferns sometimes reached considerable heights, almost like tropical undergrowth, which can only be traversed by the machete. The huge shrub heaths sparked our enthusiasm. In the word sense, the heath here is almost the name for a landscape type. Originally the undeveloped land of humans, and later also a completely infertile, non-aurable landscape was often referred to as heathland and was thus a synonym for wilderness. 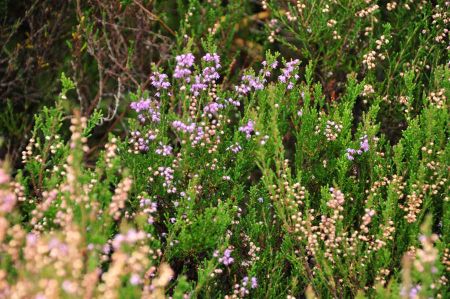 All heathland areas of Europe, off the coast, owe their origin to the uncontrolled grazing historically, in which a Hutewald was converted by the meals of livestock in a more or less tree-free, open area, which is probably also a contributing cause for the huge heathland. Again and again we encounter sheep and goats, hardly recognizable between the ferns and the heath.

The partially prevailing heather grows lush on the nutrient-poor and acidic soils along the Longdendale Trail, often interspersed with juniper. Now, at the end of September, the heather is mostly flowering as a guiding plant, but once a year turns, from summer to fall, into a wide, treeless landscape into a purple carpet. So we spontaneously decide to continue our exploration tours in the coming year. We will see if and what changes will be made by Brexit.