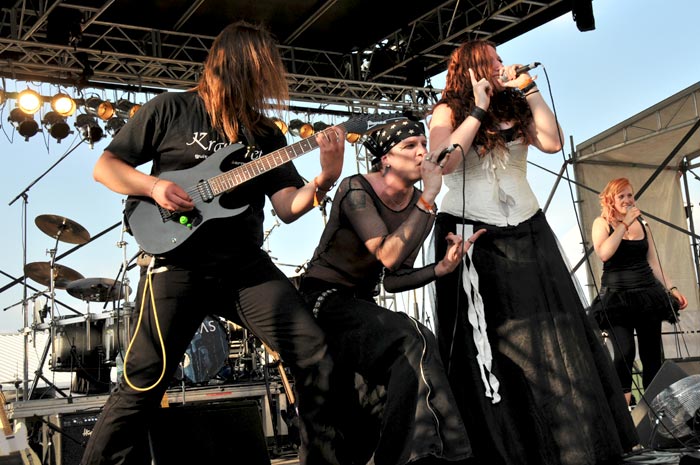 The Arena Open-Air stage started the day with the band “Seven Nails” from the south of Germany. The genre of the band is progressive metal with symphonic elements that it is the blend of heavy metal and progressive rock music. Seven Nails displayed extremely successful performance by adding symphonic vocal interpretations to this music genre.

Daniela, who is the heart and the lead vocals of Seven Nails, is interested in opera and church music.
Besides of playing drums in the band, Johannes is an excellent jazz musician and a pianist. 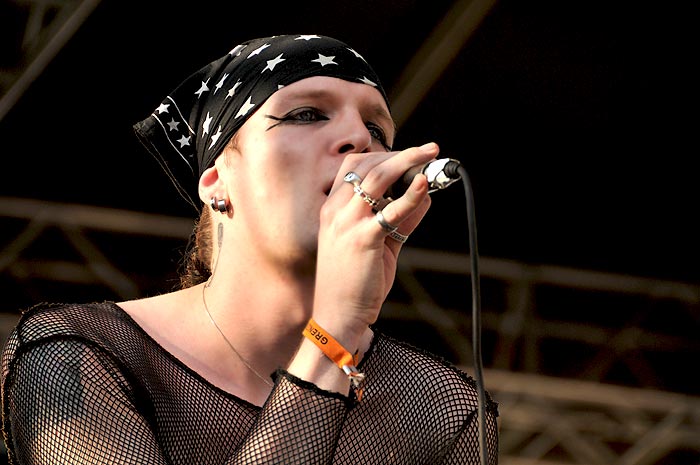 Julian is the vocalist that cheers up the band with not only his voice, but also his vivacity. In addition, Julian is a director at the same time that his world of thought is qualified as a treasure for the lyrics of the band.
Leonid, who is a guitar teacher in a school, plays the electro bass in the band. 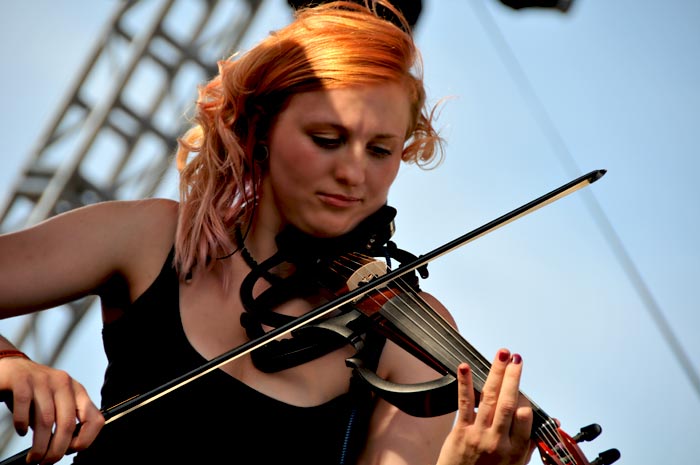 Marion not only contributes to the band with her visual appearance, but also wins recognition with her violin and voice. Besides of classical music, Marion is also interested in travel and literature. Mathias is the most metal rooted member of Seven Nails. Carrying out the promotion works and concert reservations, Mathias is seen as the machine center of the band.
Oliver supports the band by writing the lyrics and playing the keyboards. Thanks to him, new songs of the band have more progressive and symphonic elements. 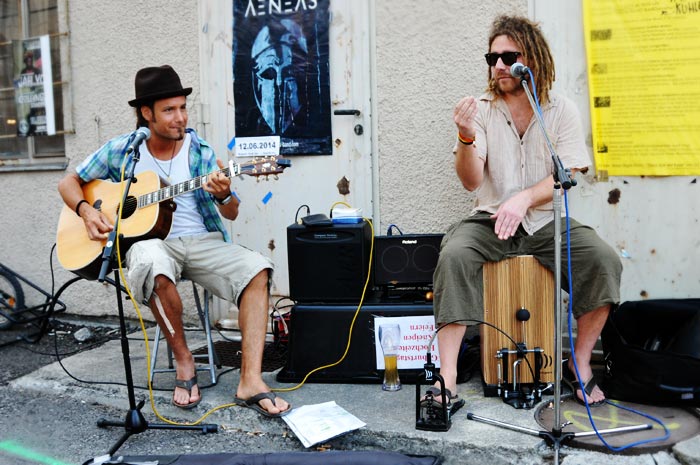 Max, who just came back from Australia tour that he goes on every year in the winter months, got Grenzenlos Festival in no time flat with new songs. During the festival, we encountered him on the Acoustic Stage and the corners that separated for the street performers. His romantic music impressed the audiences, especially lovers. 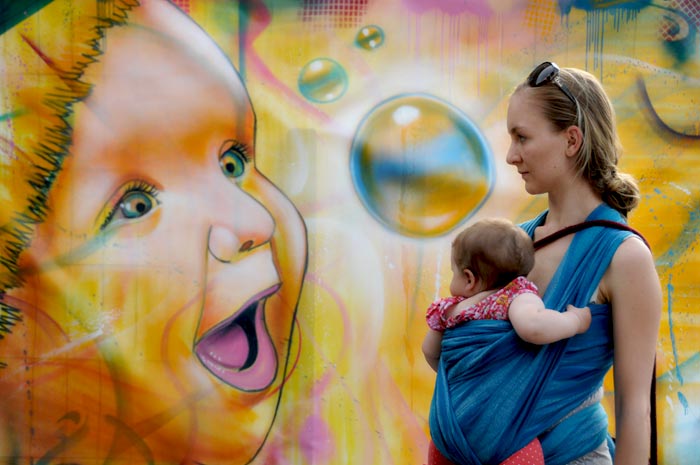 When the ornamentations, which are the essential components of the festival, and visual artworks integrate with visitors, expressive frames come into the picture. 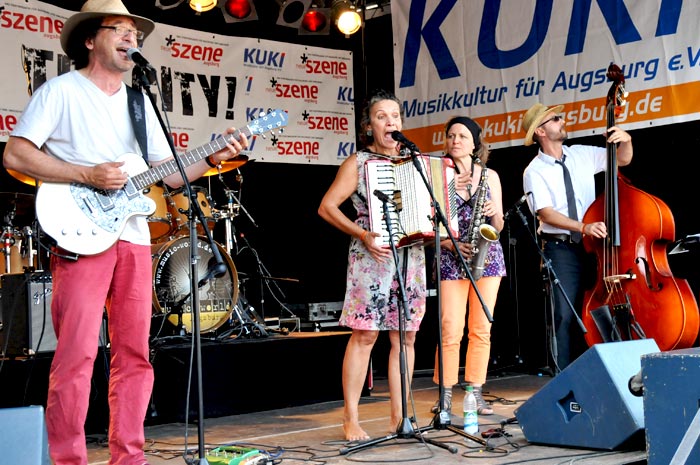 Kuki New-Stage hosted for the band “The Deadful Greats” that participated in the festival from the Upper Bavaria region. The band consists of four sympathetic and amusing jazz musicians. 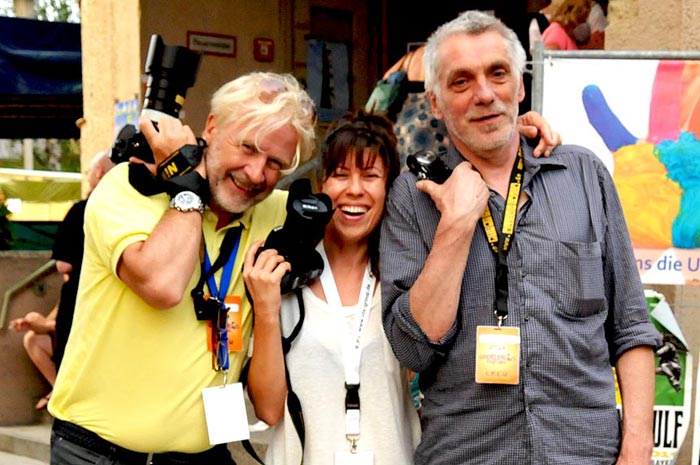 The festival did not only entertain the visitors. With our snapshots, we reflect that the owners of the booths, the photographers that we saw every corner, all the contributor staff and artists had a great time. 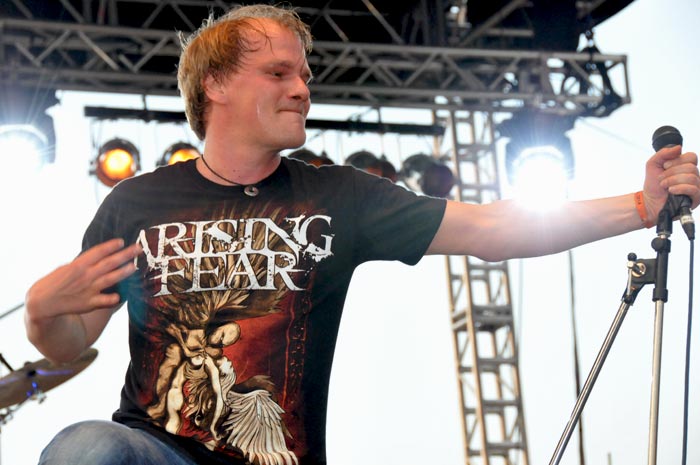 Augsburg does not only mean football! Tonight, the progressive rock and progressive metal band, Dante were like a storm on the stage of Arena Open-Air. This city hosted to the stars who went overstepped the borders of this country. The passionate performance that we watched and exciting music that we listened are obviously the evidence of this.
With his performance, the vocalist Alexander Göhs projected his passion and excitement inside him to the audiences. 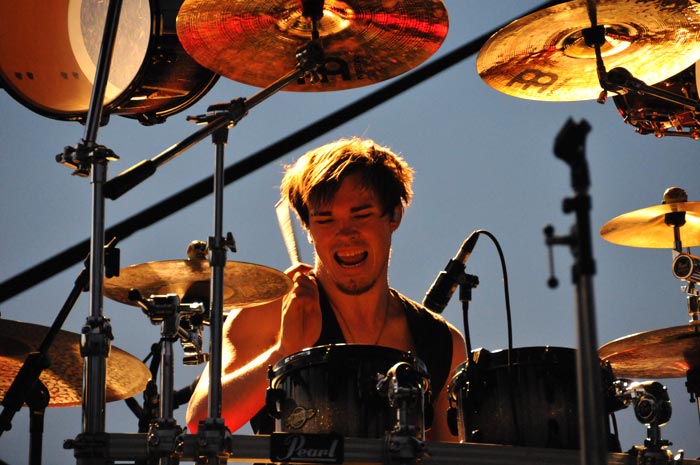 Dante fills the gap between the modern progressive metal music and old-school progressive rock. The musicians that make their own way were really having fun on the stage! Sharing out the various sounds of his musical works to the instruments, Christian Eichlinger also supports the band by playing the drums. The stirring drum show of Christian merely witnessed the musical ambition and emotionality of the band. 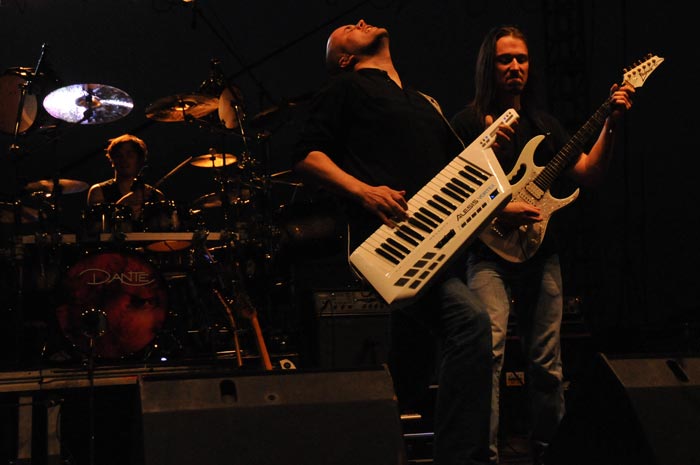 Formed in 2006 by Markus Maichel and Markus Berger, Dante reveals in a good way that progressive music is not only comprise of a well arranged technique, but it can be also striking, modern and passionate. 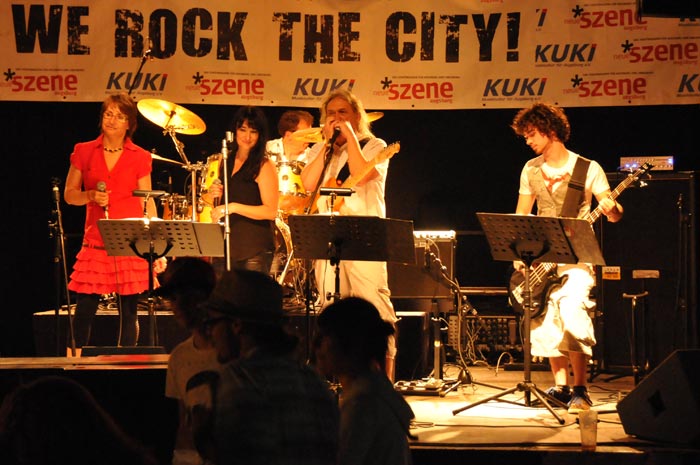 On the Kuki New-Stage, French pop - rock band Cartouche began to perform. The original band was formed in at the end of 1998 and since that time the works of the band have continued in harmony by broadening. Cartouche was the last performer of the Kuki New-Stage. We went to our caravan in order to energize for tomorrow. 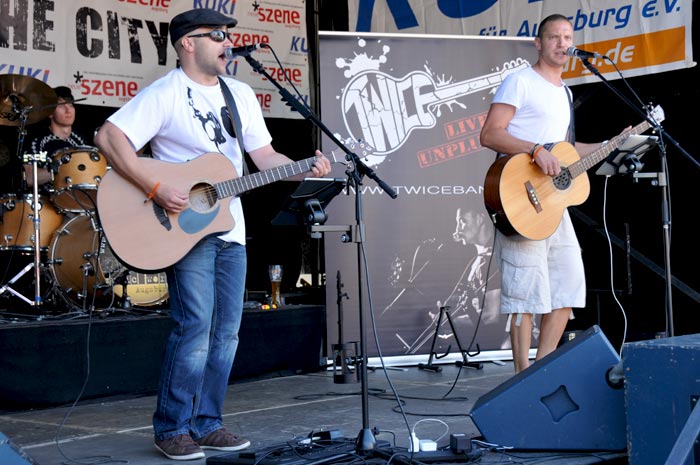 The first performer of the day was Twice Band. Accompanied by acoustic guitar, ukulele (an instrument like a guitar with four strings developed in Hawaii in the 19th century) drums, Cajon percussion, harmonica and two vocalists, the band presented a wide repertoire that includes songs from rock music to hip hop and pop music, old classics to 90s. 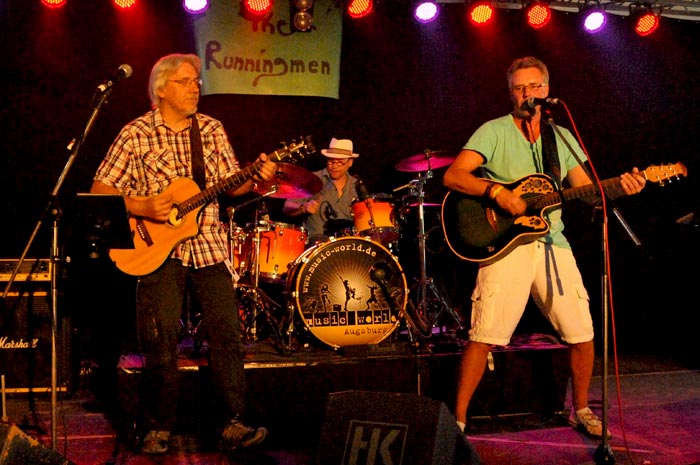 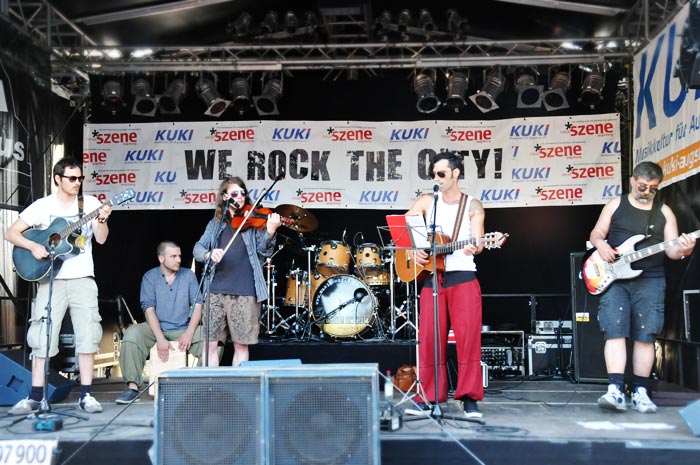 We are sure that festival visitors are closely acquainted with this band, who plays in a cafe in the city of Augsburg. Fabio Esposito, man of many talents, was performing with “Fabio & Band” on the Kuki New-Stage. Andreas was included in this entertaining program all of a sudden, but his adaptation seemed like he was part of the band for a long time. 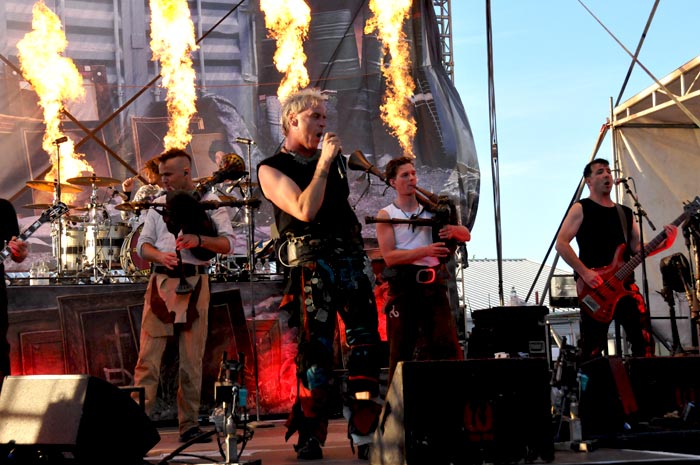 Tonight, the Arena Open-Air stage was screaming for In Extremo! Apparently, we were going to spend a flaming night. The members of In Extremo was overflowing from the stage with their clothes remaining from the Middle Age and local musical instruments. They presented a combination of the medieval music and rock music in a good way. Formed in Berlin, the German folk metal band In Extremo performed its splendid music that blended with medieval melodies and historical instruments. 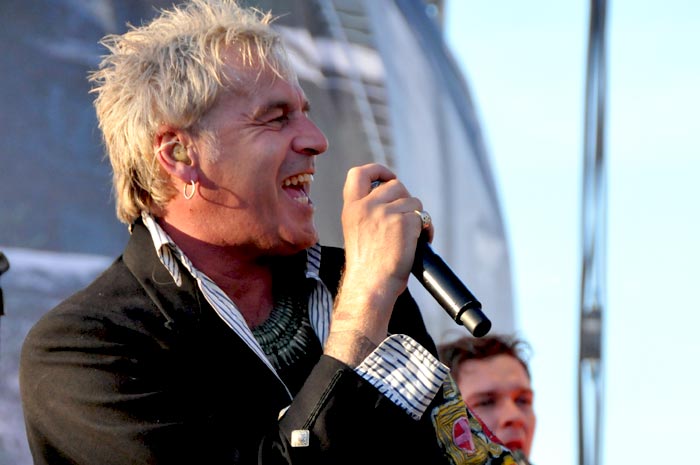 In Extremo (abbreviated InEx, or just IE) began to produce music as two separate projects in 1995. One of them was a purely medieval music band without a name and the other was a rock music band. Besides their own songs, they also played traditional medieval music in the medieval musical events. While recording for the 1995 season, the vocalist Michael Rhein found the Latin name of the band that they still use. “In Extremo” can be translated to English as “At the Edge”.
In Extremo continued to perform as two separate bands until 1997. One year later, two bands united officially and music of the band improved mostly in the genre of heavy metal. 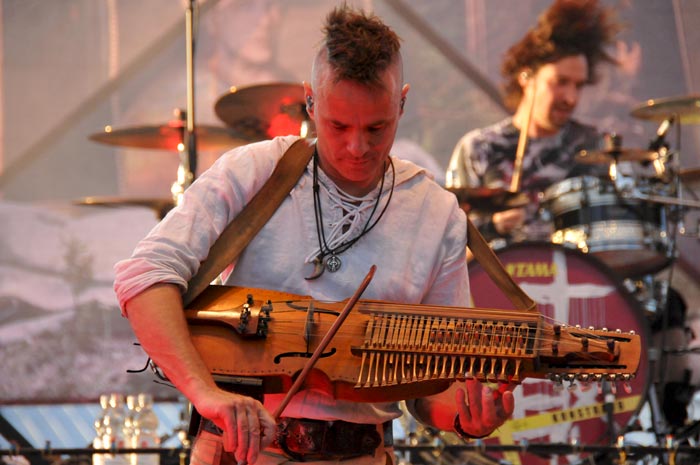 Stage names of the band members are quite interesting. In this photo, Boris Pfeiffer, who is known as Yellow Pfeiffer, plays the stringed Swedish folk instrument, Nyckelharpa. 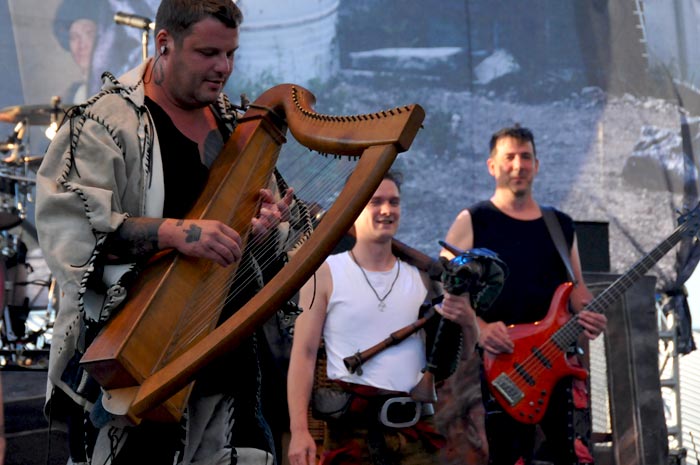 André Strugala, who uses the pseudonym of “Dr. Pymonte” on stage, drew attention with his costume and presented a performance of Harp that is one of the oldest stringed musical instruments. 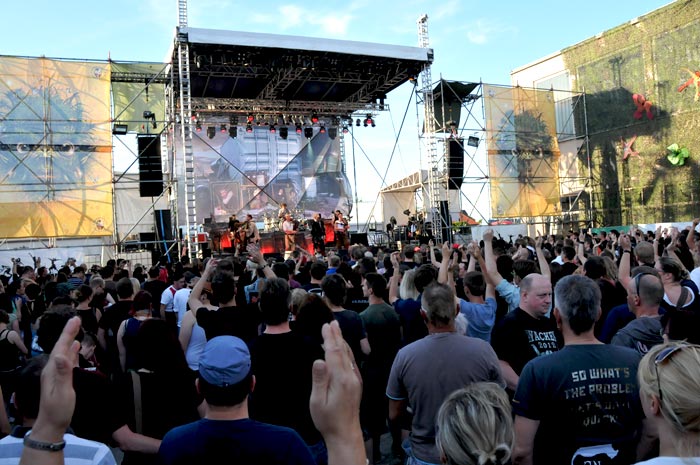 In Extremo exhilarated the audiences with incredible shows, switching instruments and cohesive costumes with the concept of the stage where the medieval melodies merged with metal music. 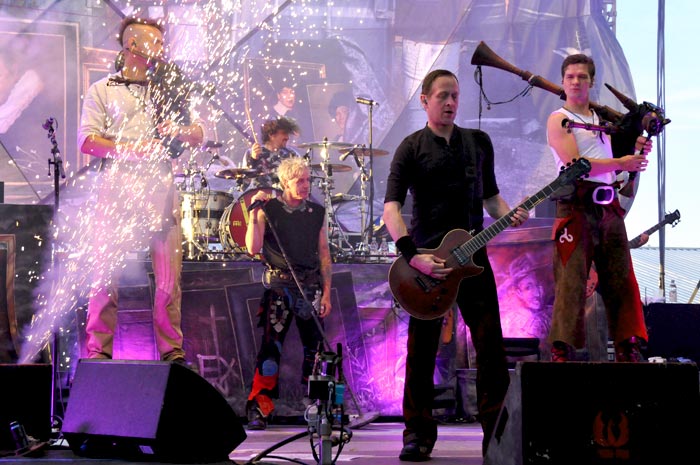