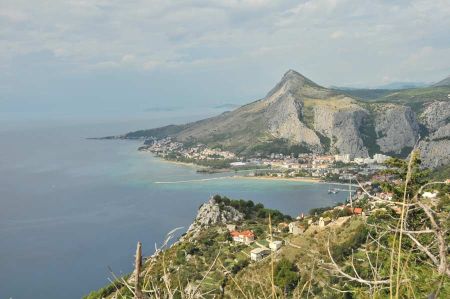 Within the framework of our project "A journey of Intimacy and Culture along the Roman Roads" we attach to support local structural development with a special emphasis on outdoor activities, which we will explore and introduce online.

Background of these explorations is the further development of sustainable tourism for the benefit of local people, where we also support the implementation of new projects and ideas.
In the past few days we mainly had concerned with the issue of hiking or walking routes in Omis and the surrounding area (here we were taken contact to the very active group of natural and environmental friends Omis), our focus now places in exploring possible Take-off for paragliding, especially because of the background that Camp Galeb showed great interest in the implementation of a paragliding festival in the future.

Clear that in the beginning we informed ourselves on this subject in the circles of local outdoor activists, to learn if there is Take-off available already somewhere above Omis and then, thanks to competent person, we learned Jerko Odžak, the chairman of the Paraglider Association of Croatia. After a first explanatory talk the interest of Jerko was aroused, which, as we then heard little later, had tried to install a paragliding festival comparable to the well-known "Ölüdeniz Air Festival". After several attempts to convince the responsible local authorities of his idea, which would certainly contribute immensely to increasing the attractiveness of Omis, Jerko withdrew disappointed. Today he operates, next to other outdoor activities, a school for paragliding beginners.

During our conversation Jerko explained to us about the development of paragliding scene of Croatia, which today includes about 500 active paragliders. Some enthusiasts from the district "Cetina" had decided to widen their idea for paragliding and to realize the dream of many adventurers, dreamers and lovers of heights and had registered the club "Pegasus" on 22.10.1999, then the first Paragliding-Association Croatia emerged. At the beginning there were no rules or regulations in this young sport, as well as anyone who was qualified teacher. The first members of the association have taught each other and therefore the knowledge and experience gained, which sometimes ended with broken bones. But the lovers of paragliding continued their work and the "KSL Pegasus" continuously continued to grow. Today the club has 3 take-off airfields in Omis and the surrounding area, is a registered training center for paragliding. Together with the Director of the centre Pegaz, Peri Pesic, Jerko also organizes competitions in paragliding and was able to perform for XC, an even international competition of categories FAI2.

Together we went on the way to check the Take-off place above Omis, initially by car until the settlement of ancient stone houses, which we've been met during the hike to the mountain hut. Now, however, we did not follow the marked trail, but followed a path that led initially by shrubbery. Jerko explained immediately, this the path and the take-off certainly may need care again. First we wanted to learn about how far the participants in a perhaps possible Paragliding Festival to the Take-Off had to walk, how steep and safely is the path. Our first concern then rapidly showed as unfounded. The path is indeed partly steep, but also to cope well with shade, we had already reached the take-off after 10 minutes.

For further discussion, we went back to the Camp Galeb where first concepts and ideas were recorded already, which are considered to work on them. The prerequisite for a planned air festival is very favorable, especially since two essential conditions already exist: The Camp Galeb to the housing and care of paragliders guests as well as the necessary experience operative Association of Friends of the Paraglider Pegaz with the teachers and trainers Jerko. We will report on the progress of a possible event further.