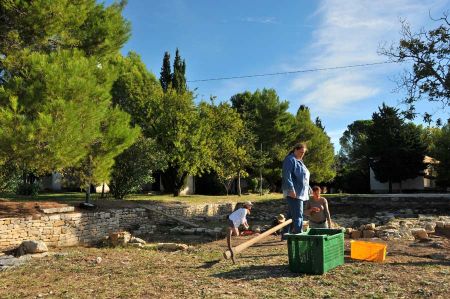 For several days, we now dwell in the region around the ancient Salona, take part in the archaeological excavations in Siculi, a first excavation carried out with archeology tourists within an excavation project, which we will continue to support.

In previous articles we had reported about the concept that is accompanied perfectly by archaeologists, a concept as well for other regions one may mean, without it Siculi would continue to not divulge its secrets. Now more details about Siculi and its excavation.

Magna Graecia (Latin meaning “Great Greece”) is a Latin name for the southern Italy and Sicily before the Roman conquest. It developed due to a large number of Greek trading centres and agricultural colonies which were founded there since the 7th century BC. The name of the settlement of Siculi is the only toponym from the area of present-day Kaštela which was mentioned in the ancient written sources. What is interesting is that the name of the settlement is identical to that of the old tribe of Siculi which present-day Sicily was named after. Furthermore, the Siculi are connected with the Greek colony of Issa, which was inhabited by Syracusan Greeks during the reign of Dionysius the Elder in the 4th century BC. The Siculots were also mentioned by Pliny the Elder as a tribe which belonged to the Naronian Convent.

In the Roman times, the area of the present-day town of Kaštela was part of the Ager Salonitanus. In the Roman period, the colony of Salona was the largest town on the eastern coast of the Adriatic, with a high demand for food. A part of the agricultural goods was contributed by the settlement of Siculi. The valuable agricultural land in the vicinity of the settlement, as well as the entire territory of the Ager, has been subdivided into 710 X 710 m plots. Local environmental conditions were highly favourable for the cultivation of olives and grapes. Kaštelanski Crljenak (Zinfandel) is an old indigenous grape variety which originates from Kaštela, and possibly dates back to the Classical Antiquity.

Ivanka is an archaeologist working in the Kaštela Town Museum from its very beginnings (1990). She started excavating the archaeological site of Siculi in 1991. She is finishing her PhD about the first phase of the settlement (Hellenistic Siculi). She has conducted many excavations from the ancient to the Medieval time in the Kaštela Bay and its surroundings. Her specialization is Hellenistic and Roman architecture and Hellenistic fine pottery.

To be seen in the opening picture!

Archaelogist and historian, working in Kaštela Town Museum since 2003. Graduated at the University of Zadar in 2002. He joined the Siculi Exploration Project in 2005, and since then he published several articles about prehistoric and Late Republican period in Dalmatia. He is specialized in prehistoric topography of the karst landscapes, and amphoras from the Late Republican period. He has been the director of the Kaštela Town Museum since 2014.

To be seen in couple of pictures with green cap!

Working as a documentarian for the Kaštela Town Museum since 2006. As a skilled terrain and artefact artist, he has worked on several different archaeological sites, ranging from prehistoric to Medieval and Hellenistic/Roman period excavations. His work encompasses measuring, drawing and categorising the found artefacts and sites using geological measuring instruments and several different software programs, as well as maintenance of the museum web page. Graduated at The Art Academy in Split in 2006.

He graduated as a Conservationist-restorer in 2012 from the Art Academy in Split. He specialised in conservation of stone as a material. He gained practical experience during his time at the university and in collaboration with the Croatian Conservation Institute. He has been employed as a restorer at the archaeological department in the Kaštela Town Museum since 2013. He is currently working on pottery and glass restauration for the museum.

Archaelogist, worked at the University of Graz and is now working as a freelancer since 2013. Graduated at the University of Graz in 2004, PhD since 2010. She joined many international archaeological projects in Austria, Hungary and Croatia. Since then she has published several articles and given many international guest lectures. She was invited to give several lectures at Universities in the USA and was invited as a guest lecturer at the American Archaeological Institute (Minneapolis/St. Paul, USA) as well. She is specialized in new documentation technology in archaeology and in Greek and Roman architecture, especially Roman Provincial Theatres.

Archaeological Excavations of the ancient site of Siculi