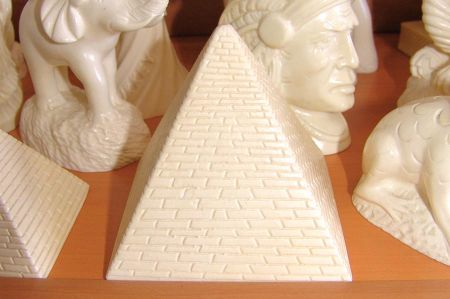 The first thing that appears in our mind when people mention Meerschaum (Sepiolite) is definitely Eskisehir. The reason for that is, that Meerschaum is always remembered as a symbol of Eskisehir.

Meerschaum, which is also called as white gold, sea foam and Eskişehir stone, is rated among the minerals which are obtained from only one region, and is called with the name of the place from where it is obtained.
Meerschaum is a hydrous magnesium silicate. They are scattered up to 150 meter under the surface of the ground in shape of irregular nodular masses. When first extracted, meerschaum is soft as it is moist, but it dries and hardens on exposure to air. It has very little pores which cannot be seen with bare eyes. It is fire resistant.  As it was used for the production of pipe (called “lüle” in Turkish) in the earlier stages, it has been called ‘Lületaşı’ (Meerschaum) in Turkish.

Meerschaum is evaluated with special quality and quantity units. Quality types are separated according to sizes of nodules and imperfection factors.
Starting from the best quality, they are known as unit unity, granular cast, cotton-piece and puny. All types are also divided into types within itself. There are 51 types of Meerschaum.

Meerschaum is used for making tobacco pipe, cigarette holder, decorative goods, necklace, earring, rosary and filters for sucking nicotine, catalyst, and for the isolation of inner coating of headings of rockets and other space vehicles.

Meerschaum has been known and processed for 150 - 200 years. This mineral was sold overseas up until 1970 and then later it was started to be processed in Eskişehir and after exported abroad. The overseas export of unprocessed meerschaum was prohibited.
In Eskişehir, mines are located near Beyaz Altın (Sepetçi) Margı, Nemli, Söğütçük, Karaçay, Türkmen, Tokat, Sarısu, Kümbet, Başören, Dereköy and Karatepe.
Meerschaum is estimated to be discovered between 1650 and 1700.

The story of the meerschaum

Rumor has told that, on a summer day, a villager, who was travelling from Margı Kozlubey to neighboring village, sat down in order to eat bread and saw a mole that emerged from a hole in the ground and played with a stone in its mouth. The villager took the stone on his hand and scratched on it with another stone.
At that moment, a sound came from the stone:
“If only the mankind didn’t shred me”
After the villager heard that, he released the stone from his hand and at that moment, the stone turned into a beautiful girl. And then she became smaller and smaller and turned into a circular shape. As villager looked at it, it disappeared by entering into the hole it came from.
The villager started to dig the hole. He dug the hole for days and died in a narrow shaft in the depths. The people who found him saw a meerschaum he held firmly in his hand. That’s the rumor about the discovery of the meerschaum.