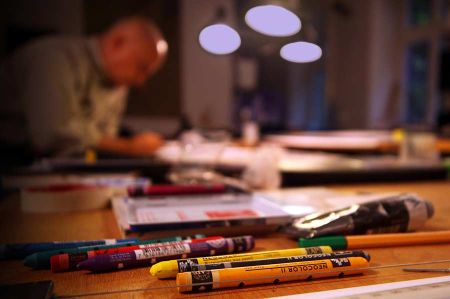 The latest high-tech TVs, which, in addition to brilliant Dolby Surround, are now increasingly focusing on 3D visualizations with some surprising effects are getting into privacy more and more.

It is correct that the viewer has to use technical aids in form of spectacles, but also in this area, the development continues with daily new ideas and developments.

Designers, graphic artists, painters and architects have always looked for ways to improve the visualization, and real art objects have emerged, which can range from the pure fascination to the overburdening of the brain, since it is no longer conceivable. The Dutchman M.C. Escher was such a graphic artist who skillfully combined three-dimensional building views so that it appears as a picture of a building in views from above and below at the same time. This also applies to water circuits drawn from different points, which are represented in the image as being flowing up and descending at the same time. Confusing for the human brain, as it is technically impossible.

The architect Yadegar Asisi has also been concerned with the possibilities of visualizations and visual representations for years:

As a son of Persian parents, Yadegar Asisi was born in Vienna in 1955, but already spent his school days in Leipzig and moved to Dresden for his studies of architecture (1973-1978) at the Technical University. Although now a graduate architect, Asisi moved to the Berlin University of the Arts, where he continued his studies from 1978 to 1984, and after completing his studies he received a lecture for perspective drawing. As a guest professor for free representation in architecture, Asisi was a professor at the Beuth University of Applied Sciences in Berlin from 1996 to 2008.

Already during his studies, Asisi studied with the artists of various categories with regard to their perspective work, be it Leonardo da Vinci or Andrea Mantegna. He was particularly interested in the exact perspective in connection with the various forms of illusionistic painting, and was especially dominated by the sometimes confusing method of perspective distortion (anamorphosis) as described by M.C. Escher.

In the long years of his self-reliance and in spite of his extensive architecture software, Asisi continues to paint his stage images and architectural simulations by hand on paper. Asisis' reputation as a specialist for three-dimensional representations, which have also received many awards from the artistic point of view, developed through the ongoing public work for clients from the private as well as the public sphere.

Another highlight in working life of Yadegar Asisis was the moment in 2003 when the architect Daniel Libeskind won the competition to rebuild the destroyed World Trade Center in New York, using a panoramic image of Asisi. Then, in 2005, a panoramic exhibition "Berlin 2005 - City Vision" followed, which was very well received and designed in cooperation with the star. Then a few years of concentration on his panorama houses in Dresden and Leipzig followed, until a new highlight could be set with the 360 ° panorama "Pergamon" on the Berlin Museuminsel at the Pergamon Museum.

One had used the urban railway when going to Pergamon. In 1886, the Berliners flocked to the exhibition grounds between Lehrter Stadtbahnhof, Invalidenstrasse and Alt-Moabit. Here, after the Second World War, a town break yawned and the building site of the Ministry of the Interior is located, there was everything that served for education and amusement. In addition to a pompous exhibition palace for contemporary art, there was an open-air market with various entertainment facilities. The visitor was able to choose between an Italian-style Osteria, Egyptian temples, where emperor dioramas of colonial acts in Congo and Zanzibar announced - and a strange antiquating hermaphrodite. The reconstructed facade of the Temple of Zeus from Olympia and a 60-meter-wide Pergamon panorama by Berlin scenery painters Max Koch and Alexander Kips stood on a pedestal reproduction of the Altar of Pergamon in polychromatic splendor.

Yadegar Asisi, who has placed a grand panorama in the Court of Honor as the entree for the Pergamon exhibition opening this Thursday, is thus linked to great traditions. After the sensationally successful Tell-Halaf exhibition on the Museumsinsel, which attracted 750,000 visitors, Berlin is now awaiting another major museum-archaeological event. It is the first comprehensive exhibition on the culture and history of the ancient metropolis in today's Turkey.

Olympia and Pergamon, were the two large-scale excavation sites of German archeology during the Kaiserreich took place. In 1875, they had begun to dig in Olympia, three years later in 1878 they started in Pergamon. At the Jubilee Festival in 1886 the finds of Pergamon were known just a few years ago. The first friezes of the gigantomachia were presented to the Berlin public in 1879 in the Rotunda of the Alte Museum, temporarily placed in front of the statues, standing there. Until they were shown in 1901 in a first interim museum designed by Fritz Wolff behind the Neue Museum, another twenty years should pass. Until then, the frieze with the struggle between gods and giants had long been the subject of school and university education through holiday courses, casts, wall panels and gypsies.

The Pergamon enthusiasm was great from the beginning on. The myth of a late-time city, with its unique splendor, spreading rapidly on spectacular terraces on the small Asian coast, and a self-conscious counter-design to classical Athens, could be used for the renowned Wilhelminian Germany. Was not Telephos, the son of Heracles, and the mythical founder of Pergamon, who had been devoted to the smaller frieze in the interior of the altar, had been suckled by a lion, while Romulus and Remus only had a female of the mother? The German Pergamon friends were similar to the lioness when they pilgrimaged to the jubilee in 1886 in antique robes.

Some other exhibitions of 360° degree panorama pictures will follow, right now, beginning of 2017, in Pforzheim "Rom 312"

Body Worlds in Istanbul - The Cycle of Life

Sepiolite - white gold from deep into the earth