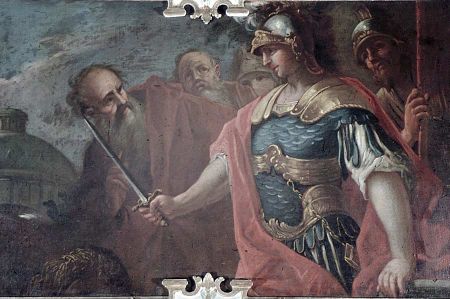 The term "Gordian knot", which is still used in our modern times as a phrase to solve a problem, comes from ancient Greece. According to mythology, King Gordios of Phrygia is said to have knotted his chariot so artfully and perfectly between the yoke and the drawbar that the connection was considered inseparable.

Here the gods were involved.

In mythology it became the following oracle: Only those who could untie this knot should be the rightful ruler of Asia. Allegedly, many rulers and kings are said to have tried to untie the knot until the "knot-slayer" came in 334 BC with Alexander the Great.

Alexander is said not to have even tried to untie the knot, but simply cut it with his sword. Whether this was the accepted solution and thus one of the reasons for Alexander's subsequent rulership of huge parts of Asia remains as open as the truth of the matter as the second story, which aims at Alexander's excellent cunning. This says that Alexander could undo the Gordian knot by simply pulling out the stake between the ropes.

We still use that idiom today when it comes to solving a serious problem. The one who offers an unconventional and energetic solution has untied the "Gordian knot".

Gymnasion - once a place of physical exercise