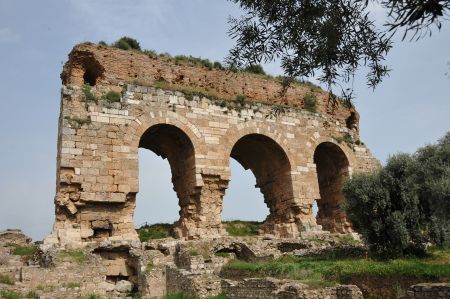 If we talk of a modern gymnasium (high school) today, we usually have a higher education center in mind, which is attended by students from elementary school to high school graduation.

In ancient Greece, the Gymnasion primarily was a place of physical, mental and intellectual education for the youth. In the early development of this institution, tightly-knit formations of heavily armed young men were trained there, the methods of which required intensive and regular training. However, the Gymnasion quickly spawned social facilities, but the focus was still on the athletic training.

The classrooms were usually associated with a hall lined with porticoes, called Palästra, in Roman times came in many cases even bathing facilities, which later counted the standard repertoire of Gymnasion and Palästra. The term Gymnasion origns from the fact that the athletes completely undressed before in changing rooms, called the Apodyteria, and thus trained naked, the bodies were rubbed with undiluted olive oil and then cleaned with the Strigilis.

At the beginning, the actual function of the Gymnasium was therefore more of a sports venue. Only later, it developed, probably starting from Athens, to an educational institution, where the basic athletic functions were not lost initially. There is a difference between the training and the competitions.

The training took place in the high schools and in the palaces. Especially at the beginning, since about the 6th century BC. The Gymnasion was not open to anyone in terms of training, but was open only to the privileged society, the aristocracy. Later in the 3rd and 2nd century BC the grammar schools became accessible to other classes, but slaves and merchants continued to be excluded.

The competitions were held in the so-called stadiums. There were a number of different disciplines, such as the race, the martial arts (wrestling, fist-fighting, pankration), the pentathlon and pentathlon (discus throw, long jump, javelin, running, wrestling) and the horse and chariot races.