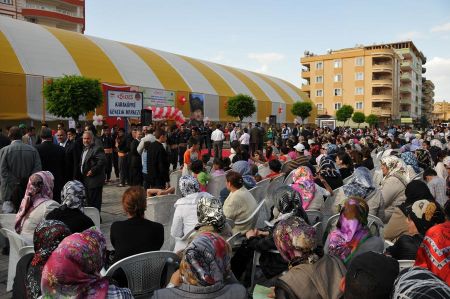 During our visit in Sanliurfa, governorship press advisor, Gökhan Özen invited us to the opening ceremony of the Youth Center. We were proud of being invited to this important opening of the center that was formed with aiming to organize education, culture, art and sport activities for the rising generation and children.

With these activities, the youth center aims to expand the horizon of the children, who hold the future of the world in their hands.

While we were waiting for the Sanliurfa Governor, Dear Nuri Okutan, who was going to attend for the opening, we had a conversation opportunity with the children that surrounded us, although we were strangers to them, we noticed that these children were quite eager to talk and learn, besides their eyes were shining with a desire of recognizing a stranger. We could see that behind a few questions that they asked us, there were thousands of questions in their minds. Nisa, whom I learnt her name later, did not speak much. She had dark and slanted eyes that draw me in when I looked at her. Even though we had to change places because of the crowd, whenever my eyes looked for her, she was there, at the right side of me. I have never been forgotten her sweet and humble smile, shy manners and beautiful eyes that look at me warmly.

My first Sanliurfa visit was almost three years ago and the redundancy of the children in the streets drew my attention, more importantly, most of these children were working. Also, at that time we had a chance to talk and one of the children with fogged eyes told us that he had to take care of his brothers. We hope that after these investments in education, these fogged glances will turn into bright brains in Sanliurfa. We believe in the positive revolution of the investments that were made for education and children of the future bailees. It was pleasing to see that Governorate of Sanliurfa and authorities were sharing the same belief with us.

As the Alaturka.Info staff, wherever we go, we make an effort to understand the past while passing between the monuments that witnessed thousands of years history. At the opening of the youth center, children’s burning hearts for the recognition and understanding of the world and different cultures will warm our hearts and the light in their eyes will reverberate from our eyes. These children, who have such an insatiable desire for knowledge and curiosity for their environments, should be supported and raised with breezes of different cultures. Away from the social and political conflicts and without being exposed to discrimination of the ethnicity, these children should be improved in the field of education without forgetting that they are the children of this country.

Friend of the young boy, who has an aggressive personality, shouted at him with a sardonic language “Arab”. We know that we are in a geography, where the individuals can live with tolerance limits in their different beliefs and lifestyles. Because of this reason, when I have been unable to understand the shout yet, the boy that was mocked shouted “No, I am not Arab!” and we felt greatly sorry. In fact, it should have been told him that instead of being ashamed of his own culture, he should experience his culture and keep it alive as long as he is a human. Also, the importance of sharing the same emotions without any discrimination of religion and language should have been conveyed to his friend. This little example reminded us the reality of the essentiality for attaching importance to the activities of raising awareness of the family. Fortunately, the Governor of Sanliurfa, Dear Nuri Okutan shows great care on this issue. The support for the education of the women in the region was huge that cannot be ignored. While we were leaving the region, we owed Nuri Okutan putting into words a debt of gratitude.

Students of Boeselager School from Ahrweiler in Izmir