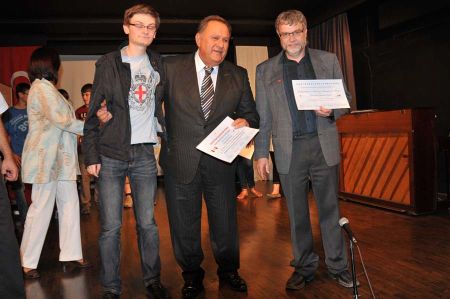 We have been in touch with Mr. Burkhard Bender who is employed in Philipp-Freiherr-von-Boeselager-Realschule high school in Ahrweiler. He has been organizing student visits mutually with İzmir Private Çamlaraltı College for 10 years.

We wanted to be acquainted with the college in İzmir and its students, and therefore agreed together to meet on 6.10.2010, Wednesday in İzmir. The first meeting point was Goethe Institute in Çankaya. Mr. Roland Schmidt, who is the manager in charge of the institute, took us to a small tour including language training classes, library and many sitting and discussion corners which were prepared for conversations. After that, he informed us about the field of activity of Goethe Institute. The large part of the duties of the Institute includes introduction of German culture with theatre plays, live concerts, reading concerts and exhibitions, and therefore expanding German culture. Teaching German language through language courses within the body of the Institute is also included in this large part.

We must admit that we all were surprised as we saw some of the students with books in their hands were disappearing quickly in the hidden corners of bookshelves. Even Mr. Bender was surprised. That’s to say, they still exist: the students who read books! How happy!

Later on, Mr. Schmidt started a small-scaled conversation environment. He asked some questions about important cities in the world, and he also asked us to say which important city belongs to which country or government. The students were very disposed in this context. Therefore, transitions to places where Goethe Institute is located were easily succeeded. There are three Goethe Institutes in Turkey: Ankara, İstanbul and İzmir. Other personnel of the institute were also introduced to us. By this means, we met two female trainees who are carrying out their three months training period. They were partially receiving language education and partially working in the public relations department. Another interesting way to be acquainted with Turkey.

And then we went to İzmir Özel Çamlaraltı College. There, we were greeted by the family of school’s founder and invited to dinner. This is a private school for upper-middle class. Mr. Bentürk Dirikal, who is the assistant manager of the school, explained the miscellaneous activities of the students and told us that they had been to abroad quite often. And he pointed out their many accomplishments – namely in documents and medals – which were won during these trips. The best teacher, it seems, is the life itself. Especially when it is about recognizing and understanding other cultures and nations. Tolerance is something that can be learned. Seeing which countries were visited by the students of this educational institution alone astonished us. It was no wonder that these students greeted us with such an open-mind and a great interest.

Later on, we had the opportunity to watch the rehearsals of a theater play, which was prepared by Mr. Bender in two languages under Turkish-German partnership. The subject was of course apparent: showing the distinctive differences between two cultures through everyday situations of a “normal” family life. This daily routine starts with a breakfast, and continues with school and a student trip to abroad… It was coming from the life itself.

This theatre play was put on stage at assembly hall of Çamlaraltı College on Friday at around 13.00 o’clock. Other teachers in school, some guests and a crowded student group were in the hall on time. Off course, there were some shortcomings one way or another. But Mr. Bender said a play in two languages couldn’t be learnt in 5 days any better than this. It wasn’t a problem. The audience thought so. There were a lot to smile and applause in this play!