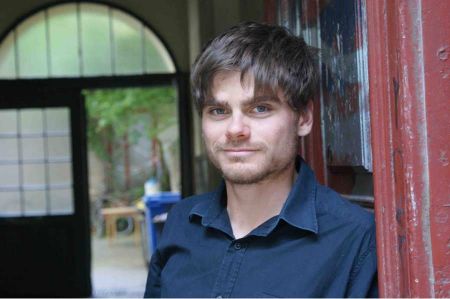 The Yollarda project has invited 48 European authors to Turkey – and among them was the young Berlin author Björn Kern. He offers us his views on why Turks have such a negative view of Germans and what could be undertaken to turn things around.

A German in Turkey: Björn Kern | The ad on the wall of the whitewashed house shines in the morning sun. "Grandma apple cake plus coffee: 2 euros 50." I'm surprised to encounter this somewhat clumsy text in German with a price quoted in euros – a "bargain" as the message continues – here in the middle of the Turkish Mediterranean metropolis of Antalya. I quickly learn that different rules apply here and only a few minutes later, nothing surprises me anymore.
"I don't even bother going anyplace where they don't accept euros!" cries out a Swabian pensioner to her travelling companion so loudly that one would never guess they were walking together arm in arm. "What? You pay for your flight yourself?" she utters in shock a few moments later. "I always let my health insurance foot the bill!"

Elderly Turks shoved aside by tourists

Turkish merchants are addressed, naturally enough, in German. Elderly Turks propped up on their walking canes are shunted to the side of the road by the hoards of spry tourists. The Germans are here!

I am also a German and I am also here. But such impressions are fleeting – at least when one enters the "Kaleiçi," Antalya's so-called old town. Kaleiçi means "between the walls" and its narrow streets lock out the buses full of Swabians and Bavarians.

Funded by the European Union's Cultural Bridges program, the Yollarda tour brings 48 authors and countless musicians, photographers, filmmakers and artists from eight participating European countries to 24 cities throughout Turkey | I am not here for "grandma apple cake" or for the "extra polished eye of Fatima," but rather for "Yollarda," a mammoth programme sponsored by the European Union bringing 48 authors to 24 cities in Turkey to read from their books in schools and universities.

The Yollarda (On the Road) book bus has been on tour since May 2009 and will drive to its final destination in June 2010, a gala closing event in Brussels. Until then, the rolling library will have stopped at Van Lake, almost two thousand metres above sea level near the Iranian border, in the port city of Trabzon on the Black Sea coast, in Diyarbakır, deep inside Anatolia, and, of course in Ankara und İstanbul, as well as in almost another dozen cities.Meerschaum, which is also called as white gold, sea foam and Eskişehir stone, is rated among the minerals which are obtained from only one region, and is called with the name of the place from where it is obtained.
Meerschaum is a hydrous magnesium silicate.

A ban from the Ministry of Culture

I had already participated in Yollarda in 2009, when it took me to Malatya, the "apricot city of Eastern Anatolia," where, should they appear, German pensioners in shorts would evoke utter dismay, and even the serving of alcohol is unthinkable in most bars. My invitation at the time was overshadowed by the Ministry of Culture issuing a ban on my reading in schools a certain passage in my debut novel, "KIPPpunkt" (Tipping Point). The contentious scene involved a young man doing compulsory community service in lieu of serving in the army describing an 80-year-old naked woman taking a shower.

The ban continued to be applied in Antalya, resulting in the organizers from the Goethe Institute, who are only ever seen holding two mobile phones simultaneously, having to search for alternative reading venues.

"Are there any questions?"

Confronted with the ultimate great questions: the Bismil Tepe elementary school in Diyabakir, Turkey, took part in the Yollarda program | At my first reading in the "Antalya Tekelioğlu İl Halk Kütüphanesi," I could hardly believe how many hands shot into the air to ask questions. In Germany, the feared "Are there any questions?" is usually met with drowsy apathy, which can be shaken off only on rare occasions and usually through coarse provocation. The listeners in the library, by contrast, seemed thankful to finally have an author in their midst. Or finally, perhaps, a German?

I wasn't confronted with the customary speculation about the autobiographical origins of my texts, but rather with the ultimate great questions. Do you see yourself as a political person? What is the task of the writer in society? Why do books and films that attempt to move people play an ever-diminishing role? Do writers nowadays merely want to sound nice and be playful?

There were no whispers or giggles among the audience as these questions were posed. Nothing could be more normal here than asking an author about the meaning of literature and, in fact, the meaning of life. At once, I am filled with remorse at the thought of Germany's permanently cool high school kids, who feel they are far too grown-up for such questions and find anything not wrapped in irony as simply banal.

What has gone wrong in Germany?

Questions about the meaning of literature and the meaning of life: school children in Turkey | Then comes my favourite question – one that I have not even once been asked in Germany, but that I pose to myself almost daily. Why are journalists, and not only in the arts and leisure section of the newspapers, usually so cynical? Why do they so quickly make fun of a writer's commitment? I don't know if it was my answers or perhaps just the exotic nature of the event, but after the reading, a dozen young men and women assembled around my lectern to have themselves digitalized with me on their mobile phone cameras.

"The Germans don't want us!"

"Why do Germans still set Turks on fire?" My colleague, Anja Tuckermann, who sat next to me on a small stage that afternoon in front of around two hundred students of the Akadeniz Üniversitesi, was visibly shocked by the young man's question. Quick on her feet, she nonetheless managed to give an answer. Thankfully, she begins, there haven't been any more arson attacks since the dreadful incidents in the early 1990s … "But what about Ludwigshafen?" came the immediate interruption, "and that was just in 2008!"

Anja Tuckermann and I exchange an embarrassed look. We are evidently not up on our facts under pressure and are unable to designate this horrible catastrophe for what it was – an atrocity in which nine German-Turks were killed. In any case, the power of facts is limited and the Turkish media has propagated an image that continues to resonate in the minds of the students – the image of Nazi Germans burning Turks. It is less about keeping alive the memory of the events in Mölln and Solingen than in stoking the flames of further hate.

Not least of all is that this plays against the background of Angela Merkel's offer of a "privileged partnership" with Turkey instead full membership in the EU, which despite the pretty packaging is seen by the students for what it is – "You don't want us!" The arrogant Germans on package tours in Kaleiçi certainly won't help in improving the image of Germany in Turkey.

How wonderful it truly is that Yollarda has given us the opportunity to present ourselves in a different light, even when it means we simply listen and perhaps learn five words of Turkish. The project has already reached some 10,000 students, young Turks at an age when it is still possible to counter the images spread by the press with one's own experiences. Let us do our best.

Björn Kern (*1978) is a German writer who has won several awards; so far he has published four novels.

Translated from the German by John Bergeron