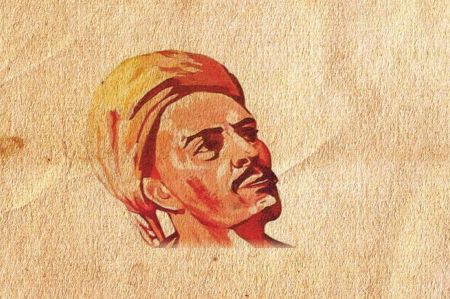 “I'm Yunus, mystic of sorrow/Suffering wounds from top to toe/In the Friend's hands I writhe in woe/ Come see what love has done to me.”
- Yunus Emre

Yunus Emre was a thirteenth century mystique Turkish minstrel who believed that the road to reach the unknown and invisible realms that cannot be explained through logic was through intuition. Towards the end of 13th century and the beginning of 14th century, he almost certainly lived in the Karamanoglu Seigniory in Central Anatolia. His poetry clearly reflects his belief in Sufism. He was a close observer of the crumbling individual and social unity which were the result of internal strife in those dark ages. Suffering the affects of that social, political and religious turmoil beclouding Anatolian horizons, he strived to use an intelligible language and interpretation, perhaps as a reminder of forgotten realities. Yunus Emre had a great role Turkish mysticism literature from beginning to end. He had a big importance to win the victory of being the language of against Arabic and Persian in the ages he lived.

Although his life and finally his death are all mysteries, with various sources giving various different interpretations, we understand from the limited information provided by his contemporaries and historians that he was not a mythical character or an anonymous personality but was indeed a real person.

As a learned Sufi dervish, Yunus Emre has invited and led the people to exercise such moral values as meeting each other with smiling faces, avoiding ignorance and loving the people in the name of creating unity, which is necessary for individual and social peace. He underlines superbly with an immense  insight  the love of God, which is reflected in the hearts, in his poem  "I am not here on earth for strife/Love is the mission of my life/Hearts are the home of the loved one/I came here to build each true heart.".

According to Sufi traditions, the knowledge of love of God is something to be learned and acquired and this is only possible by maturing and learning manners under the guidance of a mentor. Starting his inner journey at Hacı Bektaş-ı Veli Tekke, he was subsequently sent to Tabduk Convent wherein Tapduk Emre, whom he often mentioned in his poems, has become his first spiritual guide. Indeed, it may not be fully clear what sort of a meaning he has attributed to which words but, there is common acceptance in terms of traditions and historical chronicles that Yunus Emre has undergone certain tarikat training under the guidance of this person for a period of time.

He also mentions in his poetry about Mevlana, to whom he was committed, his dervish meetings and communion. Substance of the ideas that these two wise man were infact the same but, indeed their way of speaking and interpretation differed.

Claimed to be the most significant poet of the Turkish history by some authors, Yunus Emre played an incredible role in Turkish culture, literature and philosophy. His poems, the language he used and his world view has shaped the Turkish culture and still continues to do so.
His world view, metaphysical beliefs and teachings were the subject of a number of researches in various conferences and symposiums both locally and abroad. He was stated among the leading cultural personalities of the world by UNESCO, and the year of 1991 was dedicated as "International Yunus Emre Year". The views of Yunus Emre, whose works has been translated to different languages, were greatly heeded and taken into consideration by the historians because it provided clues about the Anatolia of 13rd century.

Without doubt, a widely known and an influential person, the horizons of his teachings are examined and interpreted within the context of various philosophies. As such, it becomes possible to create a Yunus portrait in which everyone finds a color of their own and is perceived differently by individuals. The common point that such different portraits and perceptions meet should bet the love for everyone and everything regardless and indiscriminately.

Love is the remedy for sufferings / Searching love, I roam from land to land/ I am Yunus Emre who declaim / Don't let me be without love even for a moment.