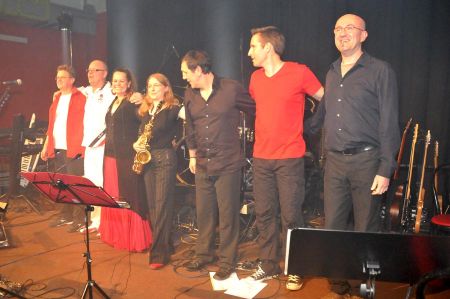 Backdoor Connection, which is a band from Augsburg and has stayed away from monotonous main movement, has been offering a very powerful cocktail which constitutes a variance for 8 years.

The repertoire of the band is composed of the band's own compositions and combination of Rock, Pop and Funk music appreciations in a trendy way; the repertoire varies from fiery songs to emotional ballads and from impressive instrumental songs to catchy Pop songs.

Backdoor Connection is now back with its new program offering Yearning for Life. Let them take you far away and feel your hunger for life; only these musicians are able to awake such hunger in such way!

How did it all start?

We founded BACKDOOR CONNECTION band on the Christmas of 2002: Georg Koenig (guitar, vocal) ve Ulrich Euteneuer (keyboard). After a period of one year in which we experienced a musical acquaintance and gathered ideas, it was time to put the band project into practice. As the date of first concrete organization was determined, it was necessary to complete all band members as soon as possible.

We knew Thomas Böck (guitar, vocal) from the period when we were together in Downtown Music Institute in Augsburg. Thomas accepted our offer immediately. After a intensive research activity for a few weeks, we had a new rhythm group at beginning of February 2003: Michael "Mazzi" Zillich (bass guitar) ve Rudi Simm (drums). Finally, Georg was convinced and it was decided that there isn't a necessity to have another vocal due to voice potential of him. Now, we were ready to start.

As can be seen from the very beginning, Backdoor Connection band is a union of musicians with very different "musical records" and band experiences of long years. Therefore, effects of Rock, Pop and Blues genres exist as well as Funk and Jazz music. As a result of this, the band's repertoire, which is composed of its own compositions, has a quite diverse appearance. In fact, everyone can find something for themselves in this repertoire.

Since July 2004, studio and jam session musician from Munich has been playing the drums in our band.  Thomas Böck left the band during summer of 2005 due to private reasons.

Another member alteration took place at the beginning of 2007 and now Frank Eberspächer play the bass guitar instead of Michael Zillich. The following alteration happened in 2010 and now we see Vincenzo Scalisi playing the drums.

Backdoor Connection band took stage successfully in the Women's Day Week organized in Izmir jointly by Konak Municipality and Goethe Institute this year and displayed the same success in the convention hall of Çamlaraltı College in Izmir again.

Current members of the band: