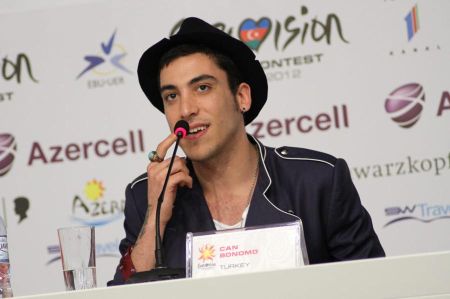 Can Bonomo started playing guitar at the age of 8, when he was introduced to music with the inspiration of his neighbor.  Throughout his high school and university years, Bonomo, together with amateur music bands, staged several concerts in Izmir and Istanbul.

Finally he said, “I’m ready”, stepped up to the plate and started working on his first album. Following two years of hard work, in January 2011, the first album of Can Bonomo, “Meczup”, was released.

Can Bonomo, who is a native of Izmir, has been involved with music since his secondary school and high school years. At the age of 17; Bonomo decided to move to Istanbul  and entered into the music business as a sound engineer. Bonomo studied at the Department of Film and Television in Bilgi University, during which he dj’d at Radyo Klas, Number One FM and Radio N101. After working at radios, Bonomo moved to television and produced TV shows at Number One TV and MTV.

The music career of Can Bonomo changed dimension, when he wrapped up his demo cd into the cover page of a book and sent to Can Saban. Can Saban, who is the producer, musical director and arranger of the album “Meczup”, is also the director of the video clips from the album. Bonomo and Saban, continuing the friendship built during the first album, are still working together, now as the founding partners of the company “Can Brothers”.