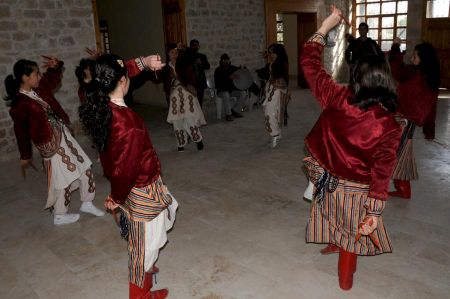 Turkish folk music is not only heard at special folk evenings for tourists at the beach resorts, it can be heard at certain traditional events. Still a part of Turkish society, folk music is played at marriages in the villages as well as during evenings for dancing.

The musicians performing these folk poems are called "Ozan". They accompany their songs on a very traditional Turkish instrument, a mixture of guitar and lute.
Even today those performers, who offer music for people in love, travel from town to town in central Anatolia and the most important ones, like Asik Veysel, who was blind and died in 1973, have recorded their music on tape. Kurdish music is completely different to the Turkish style. Their performers are called dengbej Their most well-known stars are Sivan, Perwer and Temo, who sing about Kurdish legends and myths and their fight for independence.
In bigger towns you can often hear original, a very intellectual and confusing type of protest music.

Lots of shops offer different sorts of Turkish folk music. One of the most well known singers is Zülfü Livaneli, who has performed quite a lot of songs with the well-known Mikis Theodorakis.

Live concerts of the very traditional, even classical, music of the Osman people can be heard on radio programmes.

Groups consist of more than thirty musicians, all using traditional instruments such as special flutes, the saz a different sort of lute, and kemence, a kind of violin originating from villages on the Black Sea coast.

The most important parts of religious music where composed by the Mevlevi dervishes. Their soft and soothing, sometimes enigmatic music can be heard at the Istanbul Festival or at the Mevlana Festival in Konya. Their instruments are called ney and kudun.

During the last few years Istanbul has developed into a centre of jazz. Nationally as well as internationally well-known stars are to be seen live on stage here. New styles of different interpretations of modern jazz like the ones of Süleyman Erguners, who is trying to integrate old traditional styles of music and instruments into his more modern music, can also be found here.

Turkish folklore tries to give imaginative impressions of daily, real-life situations shown through dance. Each of the seven geographical regions of Turkey (and most of the bigger towns as well) have their own folk dances, folk songs and folk costumes. You will find dances just for men and just for women, as well as for couples.

Wearing these costumes, the dancers also put on all the jewellery which belongs to the village, town or area. The Davul (a kind of drum), Zurna (a Turkish version of the oboe) and Saz (a typical Turkish guitar) are the mostly frequently used instruments in Turkish folklore. In some regions you will find additional instruments being used.

Whenever there is a big event, like a wedding, an important meeting, a festival or a national holiday celebrated in music, you will find all of these instruments.

Each year there are several folk music festivals. There are competitions in schools as well. All the traditional dances and the music itself have kept their originality and historical background. That's why even young disco fans know them, are able to dance them and to enjoy doing it.

During the last few years more instruments from foreign countries have been introduced into the bands. This has not meant that the style of the dances, the music itself or the songs have changed.

If you go to Ankara, you will find a museum specialising in folklore. The museum belongs to the Turkish Ministry of Education and the Arts and there is a special section just for folk music.

Whenever there is an international competition of folk music, you will frequently find a Turkish band  group as one of the winning teams.

If you are invited to a Turkish wedding, take the chance. You will find it a really enjoyable event.