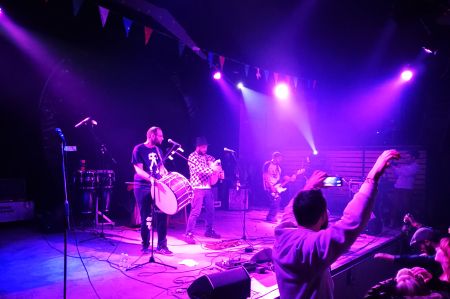 After the vocally impressive performance of the group Galgija Sound System during the Balkan Fest in Thessalonica, the next gig should also really inspire us:

the band Thrax Punks began their performance with the impressive sounds of the Gajda, performed by Vaitsis Charakopidis, one of the two founders of Thrax Punks. At first, we were astonished to notice the other instruments, which were already placed on the stage. Sure, a Davul, the great hand-driven drum of the Balkans, always belongs to traditional Balkan folk music, but an electric guitar? Well, the name of Thrax Punks did not necessarily indicate traditional music either.

The Gajda is a bagpipe similar to the Dudelsack, we know from Western Europe, which is widespread in the southern part of Balkan Peninsula, especially in the Thrace region. These local regions of the Gajda include all of Northern Greece, Bulgaria, Macedonia and the European part of Turkey.

The Gajda consists of a wind sack (often made of goatskin with inward fur) and wooden parts, sometimes also from deer horn. These wooden parts include a blowpipe, a whistle pipe with a length of 30 cm and 8 holes, and a barbell for the base tone up to 60 cm in length. The whistle has eight holes, seven on the front and one for the thumb on the back. The top of the seven holes is sometimes closed with a bird feather. The sound of the Gajda largely depends on the whistle, but also on their mood and sound purity. Another important part is the Ruchilo, the bongo. It consists of three tubes placed one on top of the other and is 80 to 90 cm long for large bagpipes.

There are basically two models: the smaller Džura Gajda played with higher pitch from North-Bulgaria and Dobrudja, while the Kaba Gajda is a low-pitched sack, which is located in the Rhodope. The Kaba Gajda has a larger wind pack and a long ruchilo. They exist in different moods - c1, h, b, rarer a.

The Gajda is usually played solo or with the accompaniment of the big drum. As a rule, it is often blown in the village squares, but she also sounds inside the house. Rarely weddings and village festivals take place without usage of the bagpipes in Bulgaria. The scale of the Gajda is comparatively small. In the deep register it is diatonic and in the high one there are also semitone steps. Practiced bagpipers produce halftones by half covering the holes and use over blowing.

The songs played on the Gajda are characterized by a typical beginning: the octave follows a glissando ascent to the highest note and unexpectedly a drop to the fifth.

Thrax Punks began in 2008 after George Stavridis and Vaitsis Charakopidis met during several gigs and then began to play first pieces. In autumn 2015, Panos Gkinis, the electric guitar punk, joined the band. In a truly colorful mixture of lively, many different styles of emerging music with influences of the Greek underground punk scene, Thrax Punks music style can not be inserted into a typical music genre.

They were inspiring tones that we got to hear and responded appropriately to the audience. Unimaginable as the visitors followed with every use of the electric guitar. A great performance!