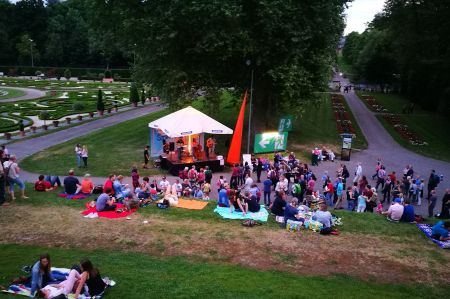 The Residential Palace in Ludwigsburg is a truly impressive exclusive baroque building probably surrounded by one of the largest baroque palace complexes in Germany, built between 1704 and 1733 under the rule of Duke Eberhard Ludwig of Württemberg in the Baroque style.

Every year, on the Whitsunday weekend, the International Road Music Festival in Baden-Württemberg takes place in the surrounding park.

The castle is surrounded on three sides by the huge park, in which the stages for the performances of the street musicians are built. On the occasion of the 250th anniversary of the castle in 1954, these gardens were partly rebuilt in a historical, and sometimes neo baroque form. Since then, the gardens have been known as the "Flowering Baroque" with the associated fairy garden, making it a popular excursion destination. The ensemble of the gardens, the Residential Palace and the nearby "Lustschlösser" makes Ludwigsburg a supra regional tourist attraction. Gardens, architecture and original room furnishings show the different conceptions of different epochs with forms of the Baroque, Rococo, Classicism and Empire.

During the summer months the flowering Baroque is a much visited parkland around the Residential Palace. Some of the facilities are reserved for the well-known fairy garden. Since a few years there is also a railroad.

Every year at Whitsun, another spectacle is taking place: the International Street Art Music Festival Baden-Württemberg.

The festival took place for the first time in 2001 and then at two-year intervals. In 2007 they switched to annual rhythm. The eleventh festival reached a visitor record in 2014 with around 40,000 listeners. 40 bands or individual musicians perform their art in the Palace Garden; To these 40 places in 2014 about ten times as many individual artists and groups applied. The artists come from different countries, even from outside of Europe. The festival committee endeavors to invite new musicians every year.

The competition winners are chosen exclusively by the audience. The top five players receive a cash prize of 250 to 1500 euros each. Otherwise, no big fees are paid at the festival. Some artists put on their bellies, earn some money with the sale of their CDs and at the same time advertise for their appearance at the festival.

The artistic level of many musicians is again very high every year. Groups such as Cobario from Vienna, Carpe Noctem from Jena, and The Busquito's (sic) from the Netherlands, the first, second and third place finishes of 2014, consisted, for example, of experienced professional musicians with classical training.

During our stay in the Stuttgart region, we were lucky enough to admire the following artists and their musical interpretations:

Starting number 12: The Cat & The Dog
Launched as a vagabond trio of street music, The Cat & The Dog gradually turned into a six-headed curiosity orchestra, which feels just as at home in the colorful lights of clubs and open airs as in front of the shopping center around the corner. In their luggage, they have loads of instruments such as violin, double bass, guitar, glockenspiel, accordion and the travel drum tool.

Starting number 32: Simona & the Bearded
The passion is first. She writes songs about life. The 24-year-old musician from Stuttgart processes her everyday life in her songs and directs hopeful, dreamy as well as critical views into the future. Their texts demand that one or other of the question marks left in the room be picked up and taken home with them. The bearded man succeeds in accompanying his melodies and words on the Cajón.

Starting number 36: Stereochemistry
Stereochemistry is not the tame Indiefolk Act, which is expected when she comes with guitar and case into the door. The singer is transformed into a dazzling art figure in the limelight and performs her eloquently performed folksongs on guitar, ukulele and piano.

Starting number 26: Morphil
Morphil, this is German-speaking Indie-pop with depth. Sophisticated lyrics, catchy rhythms and harmonies are the hallmark of Morphil. Honest and open, the songs tell of personal life and use questions that move their generation. In addition to the new, powerful performance as a band, it is still mainly the characteristic voices of the siblings, which amplify the feeling that resonates with all their songs: a connection between the listener and the artist.

Starting number 23: Keyaki
The artist and musician Keyaki Narusawa from Japan plays Digeridoo, Xylophon, Cajon and Djembe - all at the same time. As a street musician, he has traveled around the world and has found his own way of capturing audiences with acoustic trance music.

Starting number 7: Chameleon Mime from Italy
The special thing about Chameleon Mime is the fact that the rhythm of their music constantly changes without being in a particular genre. They mix swing, ska, electro swing to create their own sound - quite typical for chameleons.

Starting number 14: Florian Betz
Florian Betz is one of the most famous German Marimba and Pantam sound poets. The marimba, the giant xylophone with its deep, warm bass, produces woody and earthy sounds. The melodies are invigorating and refreshing, sometimes quiet and relaxing. His play is rhythmically lively, but always retains something meditative, dreamy.