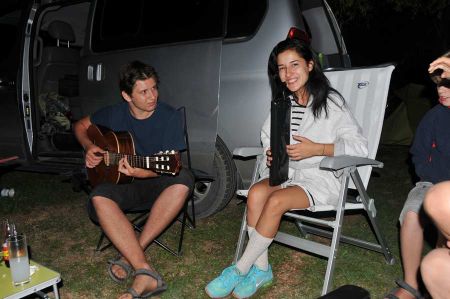 For several days we have a visit from some friends from Turkey and Germany including Merve from Antalya.

One or the other esteemed reader of alaturka may still know piano student Merve, and her preference for the traditional folk music of the Balkans when we invited her to our literature and friendship festival to Regensburg and .... many of the visitors of the four-day event may remind her interpretation of Jarnana Jarnane in the combination of piano, voice and melodica. So it was clear that Merve would insert couple of lessons of her musical arts here at Lake Ohrid.

When then a family from Slovenia had pitched their tents at the campsite and early evening heard at first quiet sound of a guitar, Merve became a certain euphoria clearly visible. Again and again her way led to the dividing fence, where she reverently listens to the sound. A short time later the family to the guitarist gathered around him, we should later get to know as Tobija, and we quickly realized the whole family probably had very musical blood in their veins. There was a colorful mixture of songs of folkloric treasure and classic rock with a clear predominance of songs of the group Queen, which texts were sung safely from the whole family.

Now Merve was quickly on the way to join the group. In English we introduced ourselves, got together in a huge circle (all family members spoke good English) and very fast first common known pieces were found, so we could start a song presentation. It was amazing how quick and professional the two had set up on each other and presented a truly great and colorful music program for a growing audience crowd. Was it initially some instrumental pieces with guitar and melodica and first vocal performances, more complex songs were found lateron, that Merve could recite almost playful but vocally excellent, as well the guitar accompaniment was remarkably empathetic.

So we again witness a "campsite concert", which led to much applause and great criticism of those present. How easy understanding and resulting acceptance and tolerance can be. Again some nationalities sat together and listened to the singing and the music of Merve from Turkey and Tobija from Slovenia, who had never met before, where texts were presented in languages that the respective opposite could not understand and were accompanied nevertheless matched musically, Music one - once again the lively convincing style. Of course, here the presentation of the Macedonian song Jarnana Jarnane was not lacking.