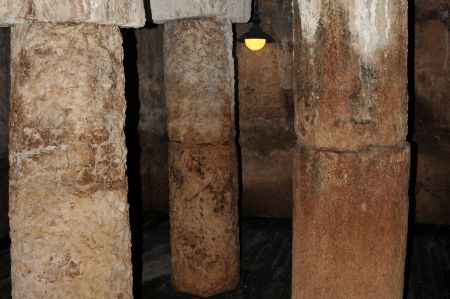 Professor Engin Akyurek from Istanbul University's Art History Department said that this well-preserved Byzantine church had been found 6 meters below ground level at the Myra ancient city located in Demre town of the Mediterranean province of Antalya.

Akyurek said the 5-meter wide and 10-meter high temple's dome had been partially destroyed; however, tiles at its roof were in good condition.

"The church most probably belongs to 12th century AD, but we will be able to determine its exact period once we enter the building," Akyurek said.

Akyurek added that all Byzantine period buildings that had managed to survive until today had either gone through a restoration process or their roofs had been changed; however, the Byzantine church unearthed at Myra had maintained its original structure.

Myra was a leading city of the Lycian Union and surpassed Xanthos in early Byzantine times to become the capital city of Lycia. Its remains are situated about 1.5 km north of today's Demre, on the Kas-Finike road.

The date of Myra's foundation is unknown. There is no literary mention of it before the 1st century BC, when it is said to be one of the six leading cities of the Lycian Union (the other five were Xanthos, Tlos, Pinara, Patara and Olympos).

We have 418 guests and no members online