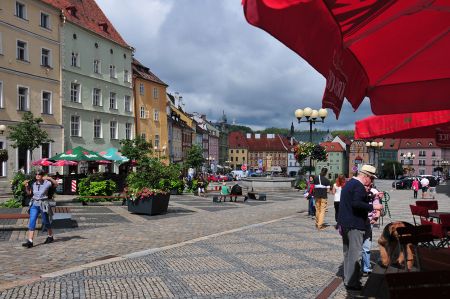 Of course, we were curious about what would experience next to the historic buildings of the city of Eger, now Cheb, so we set out for the city center after the vehicle had been parked, where we first looked at the large map at the beginning of the pedestrian zone.

Immediately due to the ground plan of the city, it was striking at which time the city was founded and how the first growth zones were settled around the inner fortress. A typical town foundation of the early Middle Ages with castle walls and city wall, which continuously were expanded. But now into the pedestrian zone.

Around the middle of the 19th century, the Egerians decided to combine the city center with the technical innovations of the time, the railway. On the southern end of the market square, two houses were demolished and the new representative boulevard was then led through this gap. A small mistake still happened: the new boulevard ended up on the square from the south. The market place in the north, on the other hand, was a bit deeper. Thus the view from the station area was not directed to the Stöckl (small medival houses) but to the roofs of the houses at the market square.

But the architects of the time did not want to accept this "mistake" and then used the old design solution of the "point of view", in this case a view barrier, so they placed a statue of Emperor Joseph II in the view of the Stöckl, the central buildings at the market square.

During the reconstruction and renovation of the pedestrian zone in the years 2009 and 2010, the billboards and flower arrangements were removed along the whole length of the street and the descending horizon line of the market square was reopened. Nevertheless, in order to maintain a visual point of view, a competition for the design of the square, where Professor Marian Karel and his suggestion of setting up a time-gate, were also held.

His proposed art object, which won first place, became a part of the overall renovation concept. The monumental "time-gate" represents a door that leads to a house that was no longer existing and in which, in its place, the medieval town of Cheb opened its door to the industrial age and the future. The artifact rotates around its own axis, unobtrusively, by 180 ° in 24 hours. At midnight it is in the "closed" position. At noon, then, in the "open" position, the sides of the artifact with the time axis of the most important data of the Eger story. This time axis leads through the entire pedestrian zone, as mentioned already, until 2011, when the city celebrated its 950th anniversary celebration. The artifact is a proud 9 meters high, 2 meters wide and weighs 3.5 tons.