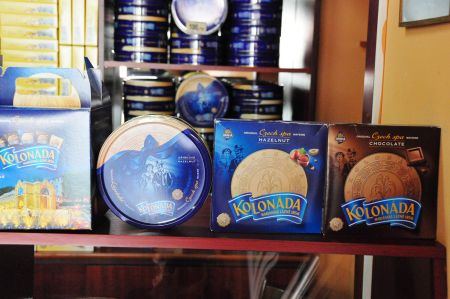 During our visit to Cheb's pedestrian zone, formerly known as Eger, we also met the small shop of the so-called Kolonada Oblaten, the traditionally baked round wafers with chocolate filling.

In the meantime, Kolonada wafers have been produced in Marienbad since 1856, today called Mariánské Lázně.

Mariánské Lázně (Marienbad) is probably the best-known spa in the Czech Republic, so the Marienbad waffle became so popular with spa guests from all over the world that they took them home as souvenirs from the spa. In the course of time, different varieties of sweet pastries have become more and more popular, especially those with chocolate filling or as a dark cocoa waffle. The wafers of the original Marienbader Oblaten are baked from a wheat flour dough between hot iron and filled later on.

The well-known manufacturer company Opavia was founded in 1840 by Theodor Fiedor in the town of same name. Together with his wife Amalie he baked waffles with waffle iron on the open fire and then sold them. It was not until 1880 that the son Theodor began industrial production. From this time, the waffles were produced in ovens by different bakeries. The premature death of Theodor Fiedor jeopardized family ownership, but his wife Maria continued the company and increased the production capacity.

Allergens: Eggs and products thereof gluten-containing cereals, milk and milk products (including lactose), soya and soya products, nuts and products derived there from.