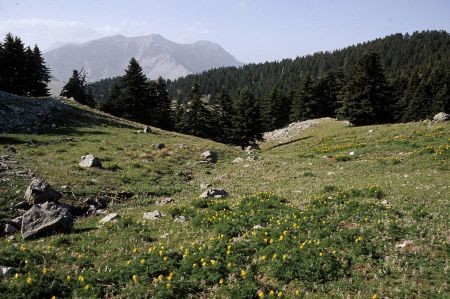 The really rare Kyllenian Adonis is growing in the northern part of the Peloponnesus in Greece, mainly on the mountain ranges Killini, Oligyrtos, Trachy and Saitas.

It inhabits damp, nutrient-rich sites in dolines, gorges and on moist pastures and on forest lightings at altitudes of 1,000 to 1,850 meters. As endemics, biology refers to plants or animals which occur only in a certain, clearly defined environment. These plants or animals are considered endemic in this area, so we had reported about the Ohrid trout, for example.

On Saitas mountain, over 100,000 individual plants of the Kyllenian Adonis were found at altitudes of 1400 to 1800 meters; this area is home to the largest known population of Adonis cyllenea.

The Kyllenian Adonis was discovered by Theodor von Heldreich for the first time in 1848. In 1867, Boissier described Adonis cyllenea var. Paryadrica Boiss, on the basis of a collection of a plant with unripe fruits collected by Petr Aleksandrovich Tchichatscheff in the southern Pontic Mountains (ancient name: Paryadres), today Turkey,  hairy fruit with a cropped beak from the Greek plants. This taxon is only known from this collection and could no longer be found during a follow-up in 1997. 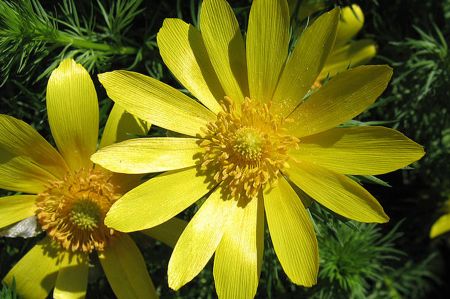 The Kyllenian Adonis was classified as a "Vulnerable" after its rediscovery in the 1980s and 1990s. In 2009 it was downgraded to "Near Threatened" after the discovery of further growth sites. The most important cause of contamination is grazing by goats, in particular the consumption of the flowers, which considerably hinders the generative propagation of the plants, so the Kyllenian Adonis was taken into conservation culture in some botanical gardens. Like other endangered European plant species the Kyllenian Adonis in Germany is particularly protected by the federal protection regulation.

For the first time in 150 years, the Kyllenian Adonis was re-discovered in the province of Şebinkarahisar in the northeastern city of Giresun. After some studies on the ecosystems in Giresun and Gümüşahne, it could be found that the plant has not flourished since its discovery  150 years ago. The red flowers are called "blood-drops," while the yellow plants are known as "Adonis-Cyllenes." There are nine species of this "flower-drop-flower," two more subspecies in yellow.

The flower contains toxic alkaloids, but is registered as a medical crop.

Almond trees - first flowers show up in the sunshine