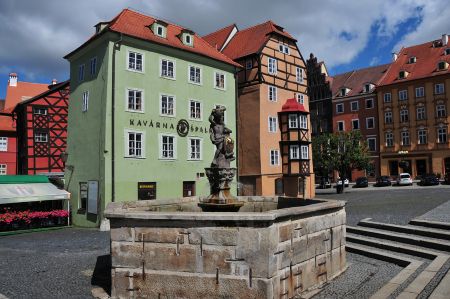 In the first part of the pedestrian zone of Cheb, formerly called Eger, the typical image of a shopping street opened in front of us, window next to window, but still to the extent seize that were current many years ago.

Impressively, however, the historical information on the history of the city, which had been admitted in the streets, and which always led us to look at the ground. With our arrival at the time gate, however, the picture then changed suddenly, because to the market place the road extended to the area, which was lined with medieval houses, mostly wonderfully renovated. We had arrived at the so-called Stöckl.

Along the baroque town hall of the Italian architect Giovanni Battista Alliprandi, which is unfinished by the lack of money, a group of houses that go back to the late Gothic period, the so-called Egerer Stöckl (Špalíček) opened up. This landmark of the market square is a complex of eleven bizarrely half-timbered houses in which Jewish merchants lived.

These interesting, partly small buildings were already built in the 13th century in connection with the new needs of the local merchants, precisely at the places of the former cabin groceries and meat banks. The entire complex was completed in the 15th century. According to the oldest existing picture from the year 1472, the ground plan of the today very unique complex of the eleven commercial houses was preserved.

Earlier, the Stöckl was connected to the western side by a third block of houses, which was probably then demolished in the 19th century. Because of the lack of space and the small estates, the angular objects were built up. The Stöckl is divided into two blocks by the very narrow Krämergasse, which is little more than 1.60 meters wide.

The market square of Georg von Podiebrad itself refers to the visit of the Czech king, who was here in the years 1459-1487 to settle the conflicts between the Bohemians and the imperial princes. For the stone made, originally gothic houses on the market square, their narrow faces and, above all, multi-storey, high roofs, which were once displayed, highlight the richness of the medieval city of Eger. The merchants and businessmen - the original owners of these splendid houses - used the attic space as a storage for their goods. They were displayed immediately, the higher the roof, the more successful and richer the merchant.

On the square are also two market fountains, the one with a Hercules statue, the other with a Roland statue. The Grüner-Haus at the market square belonged to the Werndls, whose family crests were placed over the portal. In this house, Johann Wolfgang von Goethe often stayed.