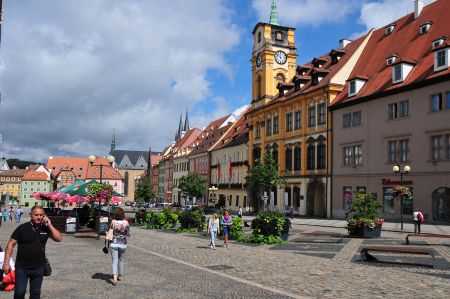 The first written reference about the town of Cheb in 1061 was made in a document of German King Henry IV. In the Middle Ages, Cheb became a city where tradesmen and merchants did quite well, got rich and powerful.

Eger was first mentioned on 13 February 1061 as Egire. In 1125, the margraves of the Bavarian north-west, the Earls of Vohburg, erected a castle on the site of an older Slavic settlement. In 1167, Eger became the property of the Staufer emperor Friedrich Barbarossa. Eger was raised to the city before 1179. On 12 July 1213 King Frederick II signed the gold bull of Eger, which strengthened the legal position of the bishops of the empire and enlarged the church state. In 1242, Eger received Nuremberg municipal law, and in 1277 it became Reichsstadt. As a result of the extinction of the Staufer in 1268, Eger came under Bohemian sovereignty for the first time a few years later. On October 4, 1322, Ludwig the Bavarian pledged the city to the Bohemian King John for 20,000 marks of silver. The city of Eger was assured in a document of October 23, 1322, a great independence against the Kingdom of Bohemia, including the preservation of its position as a Reichsstadt. This status was nevertheless undermined in a long process. The Reichspfand was never resolved. After the crowns of the kingdom of Bohemia and of the Holy Roman Empire were united in one hand under Charles IV, there was no reason for the deposit of the pledge.

The situation on the border between Bohemia and Bavaria and Saxony was, on the one hand, advantageous, but not on the other. It was, of course, beneficial for the trade, but it was already a question of security for the locals. The great breakthrough in the development came in the 12th century, when Cheb came into the hands of the power of the Hohenstaufer. The most famous and important of them, the Emperor Frederick Barbarossa, made the city to the base of his power politics against the Bohemian lands. The emperor's power is reflected in the construction of a powerful imperial residence, the so-called Palatinate, which was to represent the new feudal power.

To this day, the castle fortifications with Romanesque five-piece windows, the black tower and the Romanesque-Gothic chapel of Saint Gérard and Saint Ursula have been preserved from the imperial palace of the town of Cheb. In the time of the Thirty Years' War, Cheb was a favorable operational base for both fighting sides.

At that time, the very talented commander, the Duke and Generalissimo of the Austrian Emperor, Albrecht von Wallenstein served in the imperial army. Many envied Wallensteins power and success, and he began, who knows why, to negotiate with the enemy. Wallenstein was accused of working together with the enemy and murdered on 25th of February 1634. This happened in his quarters, in the house of Pachelbelow at the market-place.

The great interest of the visitors to take a look at this place led as early as 1873 to the opening of the city museum, which now offers visitors lot of Wallenstein's sights, art collections, artifacts the history of the city Cheb and the Egerland, an exhibition of folk furniture and other sights.

After the World War II Cheb was clamped in the iron curtain for a long period of 40 years. But the spirit of this town hasn't died. In the last years the town is reviving and becomes an historic centre of Europe.