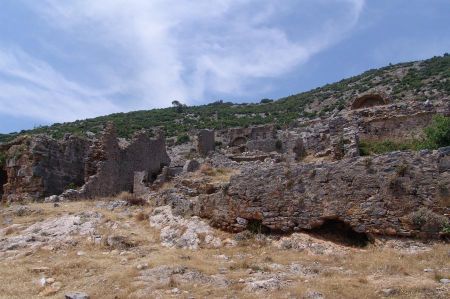 After leaving Alanya and driving for about two hours along very small, winding but breathtaking roads, past beautiful bays and lonely beaches, you will reach Anamur, a place not yet touched by mass tourism.

Absolute silence, no disco sounds, beautiful, natural, clean beaches, historical villages and friendly people - Anamur is still an undiscovered gemstone on the Turkish Mediterranean coast about 120 kilometres southeast of Alanya. There are beaches about 20 kilometres long extremely suitable for swimming and sunbathing, while the waters of the ocean are totally clean and shimmer in the sunlight.

The name Anamur (Annamura) in the old language of the Etruscan- Luwithian people means "Village of the Holy Mother". Later, when the town belonged to the ancient kingdom of Cilicia, the name was changed to Anamuroin. Excavations, which have been taken place in the old acropolis of the town, show that this region was a well known holy place for the people of Pamphilia, Isaura and Cilicia.

From the beginning of the 6th century B.C. Anamur developed more and more, starting from the acropolis and downhill to an important trading town with a large harbour. Later the Seleukians, the Commagenians and hordes of pirates ruled the town. During the first century B.C. the town was under Roman leadership, and several important buildings were created belonging to the district of Isaura. This was the beginning of the new name Anamurium.

Today, about 300 metres above the peninsula, you will find the acropolis surrounded by walls. While doing more excavations, the ruins of a theatre, a bath, a basilica, avenues of pillars and an aqueduct have been found. Right on the coast they found an assembly building of four corners with nine rows of seats as well as an ancient church of square design. In the church you will find a colourful floor mosaic and next to it the ruins of a Roman bath. Also interesting are the two and three storey-high graves, which look like small houses.

For the visitor with a real interest in these things, it is surprising how the Turkish people regard these historical ancient sites and ruins. Mosaics, more than two thousand years old, are given no protection against storms and rain and people even use these places for barbecues. However, the people are learning slowly what sort of treasures they have with all these ancient sites.

For anyone visiting Turkey, Anamur is an interesting place to visit. Just 7 kilometres further to the southeast you will find the Castle of Anamur, which was used by Barbarossa and his knights during their crusades to the Holy Land.