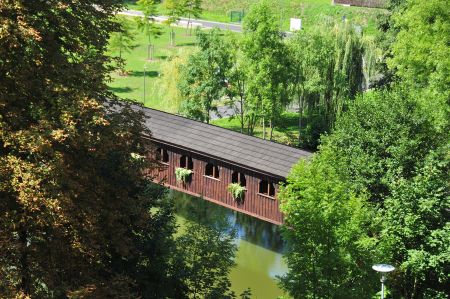 During our walk through Cheb, we took advantage of the magnificent view from the castle to see the surroundings of the castle, the river Eger as well as the city center.

After the decline of the Roman Empire, just a few stone bridges were built over long periods of time, not just the cost had to be questioned. As many Roman techniques (urban drainage, public toilets, hypocaust heating system) were lost, the reason why is still not clear. Most of the bridges were built in the form of yoke and beam bridges up to modern times. Then, in the Late Middle Ages, these bridges were provided with a roof to protect the wooden structure. Examples include the Kappel Bridge in Lucerne or the Ponte Vecchio of Bassano del Grappa in Italy. Although Renaissance architects such as Andrea Palladio and Leonardo da Vinci are familiar with the design of wooden bridges with load-bearing structures over the roadway, they appear to have hardly been realized.

A covered wooden bridge is a wooden bridge built in half-timbered construction with a roof for protection against the weather. The purpose of the covering is the protection of the load-bearing timber construction against weathering, since unprotected wooden beams weather more quickly, at least when incorrect types of wood are used. A question to the technicians and engineers, which until today is hardly clear, where there are many European, weather-resistant species of wood (larch, robinia, acacia), since unprotected timber bridges from technically incorrectly selected woods must be renewed every 10 to 15 years.

A probably much more important reason for the construction of covered bridges earlier was, that horses and partly also the people shied the rushing water and led more easily through almost windowless closed bridges.

In a narrow work, two closed side walls belong to cover the bridge; However, such bridges also apply as covered bridges, which are open or partially open towards the sides, for example, if they are provided with window openings.

Covered wooden bridges were widespread from the Late Middle Ages to the end of the 19th century in wooded areas of Europe. Because of the higher loads of heavier vehicles today, such bridges are only built for subordinate roads, as well as bicycle and footpaths (Bicycle way bridge in Remseck).

By the way: The most important spring of the "Old Eger" is the Zinncreek. It originates on the northern slope of the Schneeberg in the Fichtelgebirge. Because of the better accessibility of the source, however, in 1850 another source was marked with a memorial stone as the origin. This has been the official source of Eger since then. The river then takes its course eastward, reaches the Czech border after 60 km at Hohenberg on the Eger and is, on a short section border river, before finally flowing into the Czech Republic. The largest city at the upper river is Cheb (German: Eger), below the dam Skalka on the border to Bavaria.

From Camping Neue Donau to Prater - hiking the way

The Palace ark and the Gloriette of Schönbrunn