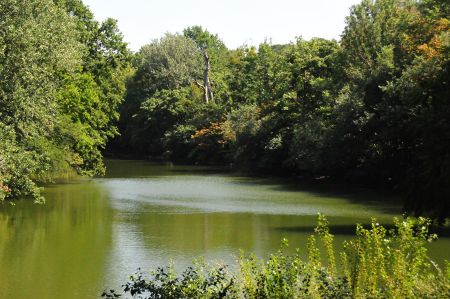 Many travelers may think it is too far hiking into the inner city of Vienna from the New Danube campsite, but we have managed the hike to the Viennese Prater through the green belt of the city, which was, even very hot that day, really enjoyable.

Knowing the prevailing temperatures, however, we chose the route that was mainly covered with tall trees offering adequate protection from the extreme sun. Of course, we wanted to enjoy the wonderful nature through the former Danube valleys. This is a path that can be recommended in addition to the cycle and footpaths along the Danube Canal.

At first we used the pedestrian bridge across the Danube, we turn left into the Wehlistrasse to the green belt "Unteres Heustadelwasser", which follows an old side branch of the Danube up to the Prater in almost forest-like surroundings. If you want to abbreviate your way a little, you can use the path below the expressway A23, get to a bridge crossing the water and you reach the green belt too. You can reach the Prater area without a noticeable transition, but the footpaths are mainly asphalted over there. This route can also be explored by bicycle.

The Prater is a former forest and hunting area whose oldest mentioning is dated in a document dating from 1162, in which the emperor Friedrich I. Barbarossa mentioned a land act between the Schwechat and the Danube at Mannswörth, the Pratum (Latin "meadow") ("Quod dictur Pratum") for a nobleman named Conrad de Prato ("Cuonradus, qui dictur de Prato").

The Prater is situated in the southeastern part of the river island, which has been formed by the Danube and Danube Canal since 1875. There is no officially defined restriction on the Prater area. In the course of time, the area designated as "Prater" has been considerably reduced by felling; The built-up Stuwerviertel (formerly Schwimmschulmais, Feuerwerksmais) is no longer described as part of the Prater, as is the Freudenauer harbor or winter harbor, located in the southeast of the island.

The Prater was once a relatively untouched forest. Originally, only a small island in the Danube north of the Freudenau was mentioned as a prater, but the term has also been used for neighboring meadows over the centuries, for example, since the 19th century, also for the Krieau and the further upstream, with meadows through the forest.

In order to establish a direct connection between the imperial Palais Augarten and the hunting grounds of the court in the Prater, the main way line, now 4.4 km long, was laid in 1538 (almost parallel to the current main stream of the Danube). It was created by clearing in the forest. Until 1866/1867 the middle part between 1. Rondeau (Meiereistraße) and 2. Rondeau (Lusthausstraße) did not yet exist; Here the avenue was interrupted by the already-mentioned water of the Heustadel, on the southern bank of which a road formed the connection. In 1867, the bridge, which at the time was bridging across the Heustadel water, was opened. Since then, the main avenue runs from the Pratertern to the Lusthaus. As is customary for a field, the prater is very shallow; the highest elevation, the seven-meter-high Constantine hill, was artificially infused.

For the soccer fan, the Ernst Happel Stadium, which is located next to the race track on the edge of the Prater, is worth visible too. With small interruptions for photo stops and some conversation on the way, we had reached the goal at the Wurstelprater after about 2 hours. If you want to follow the path, you should also visit the Hundertwasser House on the Löwengasse on the other side of the Danube Canal, which is very close to the Danube Canal.

StreetArt in Vienna - beautify the gray of the highway pillars