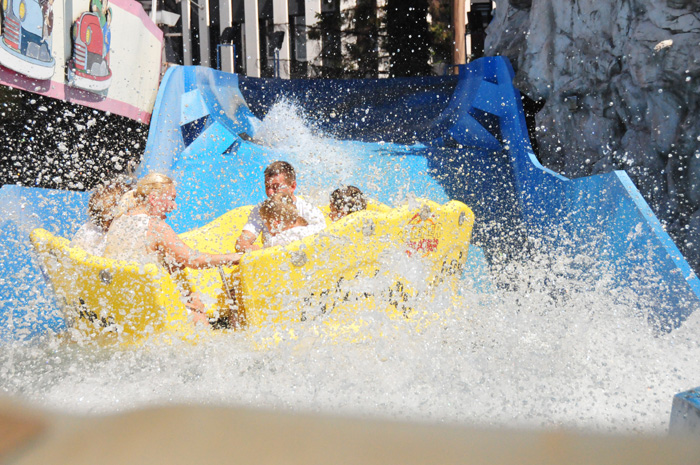 For another exploring of Vienna we started from the campground New Danube on foot this time, in order to find a route as far as possible away from local noisy traffic to the city, which can either be followed on foot or bike. The goal was the green zone called Prater, at least to get to the Wurstelprater, despite the current temperatures. 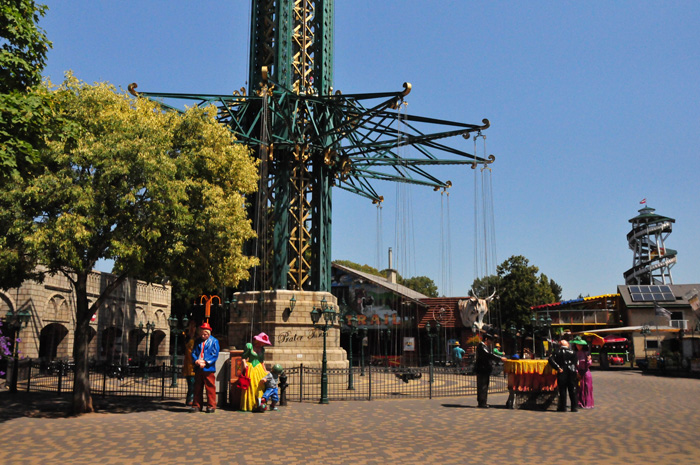 The Wurstelprater is probably the best-known part of the Viennese Prater, in which there are many entertainment companies with ghosting, ring games (carousels), waves, highways (roller coasters), mirrors and laughter cabinets, autodrom, falling towers and many other family-friendly establishments. 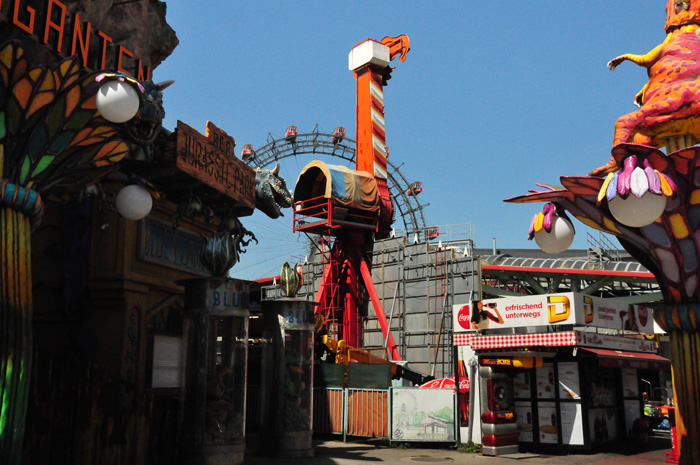 During the Enlightenment in the late 18th century, these popular stages were expelled from the marketplaces of today's old town and found new locations in the Prater, which was opened to the public by Joseph II in 1766. 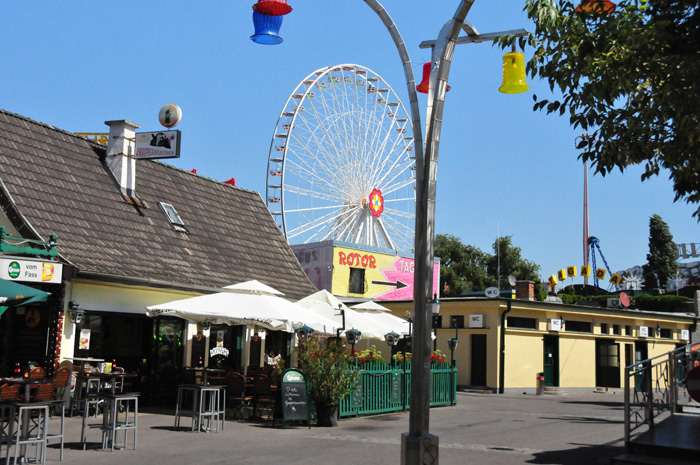 With the Wurstelprater presumably the first theme park in the world was found around 1900 called - "Venice in Vienna". It was erected in 1895 by Gabor Steiner and formed the lagoons on the imperial meadow of the Prater in a smaller format. 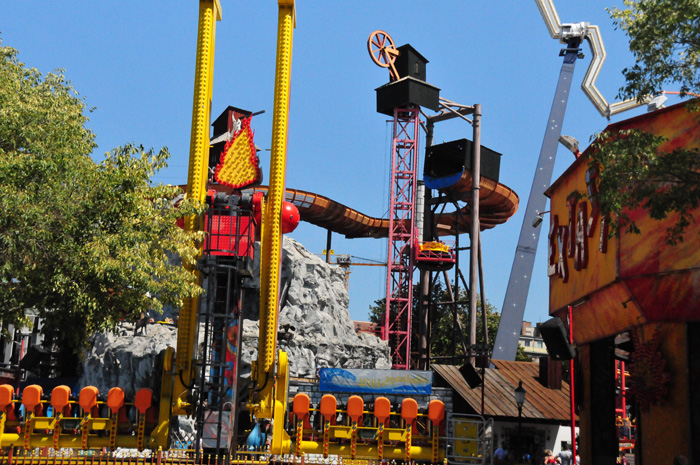 Water channels were created, lined with fairgrounds and other amusement possibilities. New attractions were added annually to the summer season. 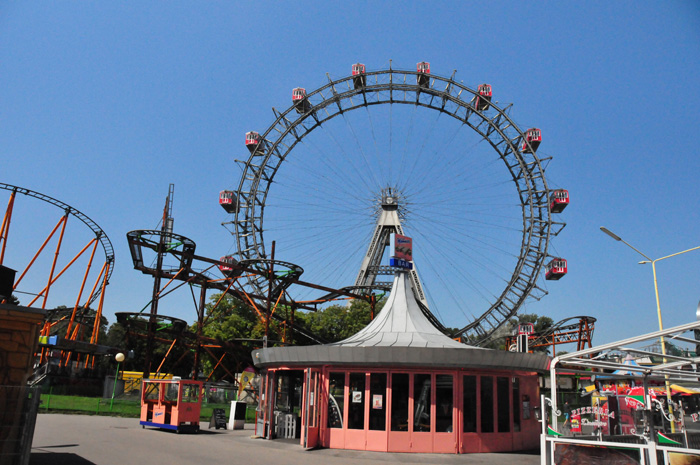 In the years 1896/97 the Riesenrad was built, today one of the landmarks of Vienna. In the twenty years preceding the First World War, the Wurstelprater achieved top results in supply and demand. 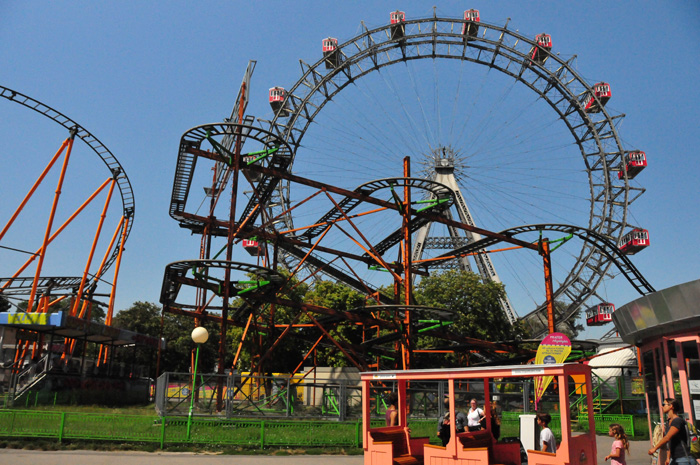 In 1933 the world's first ghost train was put into operation on parcel 96 of Friedrich Holzdorfer. In the autumn of 1948 important parts of the soon-to-be-known feature film "Der dritte Mann" were shot. 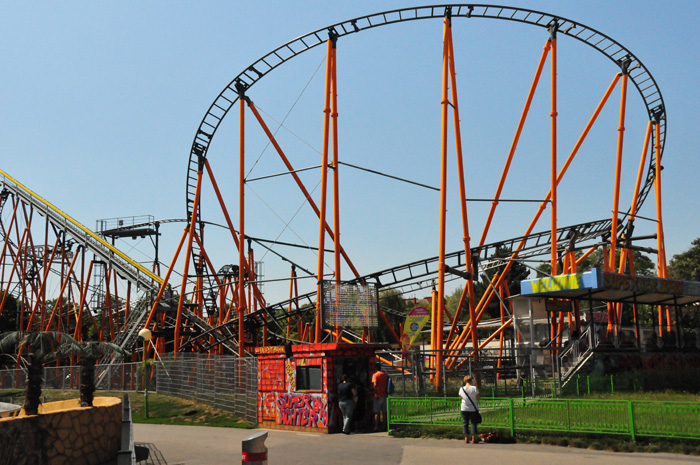 In 1981, the cinema between exhibition road and Riesenrad burned down, the last existing Praterkino, which was not rebuilt. The cinema of about 1,000 seats, had existed here since 1927 as the successor of a theater founded in 1845. 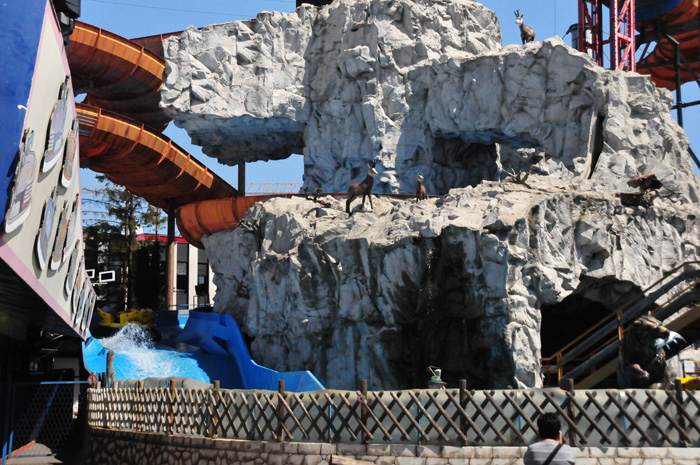 The flower wheel, opened in 1993, is a ferris wheel of a recent date. With its 35 meters diameter it is significantly smaller than the Vienna Ferris wheel and in contrast to this has turning open cabins. 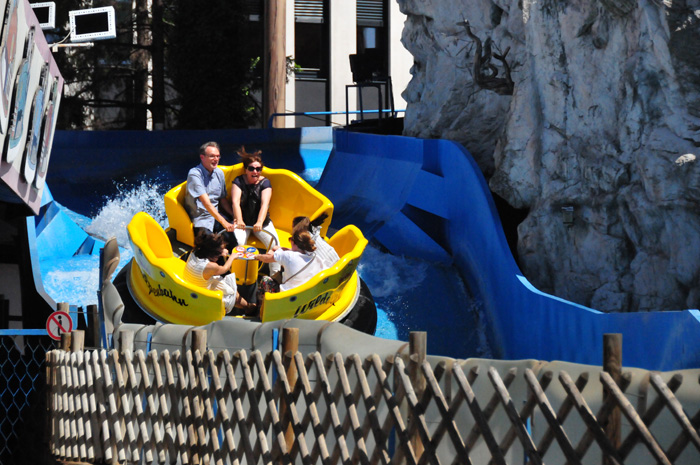 Three other, although smaller, landmarks of the Prater are the Calafati, the Watschenmann and the Toboggan. 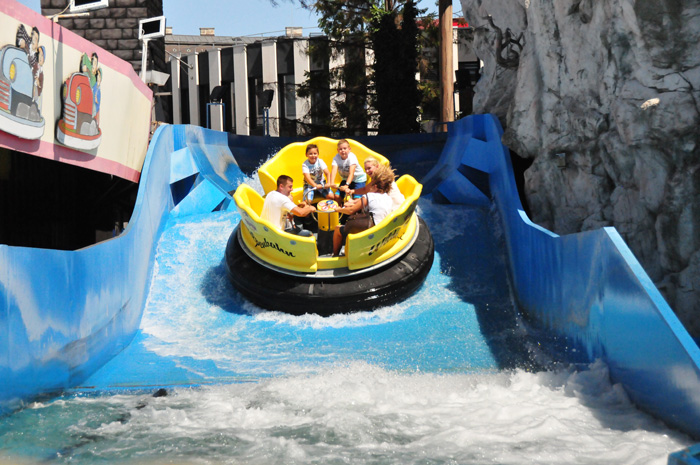 In contrast to many other amusement parks, the entrance to the park is free; The consumed entertainments are to be paid by the individual showmen. Although the Wurstelprater has joint marketing, the individual properties are leased by the City of Vienna to private entrepreneurs who are each at their own risk. 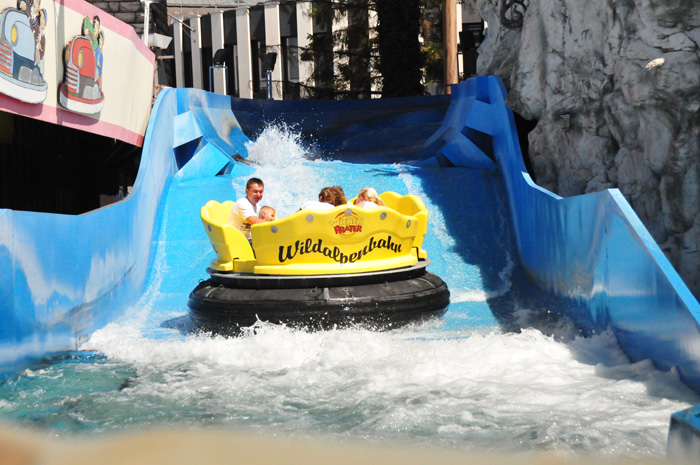 The Wurstelprater also offers a wide range of culinary delights, for example the Lángos, which are available at numerous stands, and the famous Schweizerhaus, which was taken over by Karl Kolarik in 1920. Nowadays, it is mainly known for its genuine Budweiser beer, which has to be transferred with little CO2 and so that fast consumption is advised but its taste is more mild. Another specialty is the pork saddle. 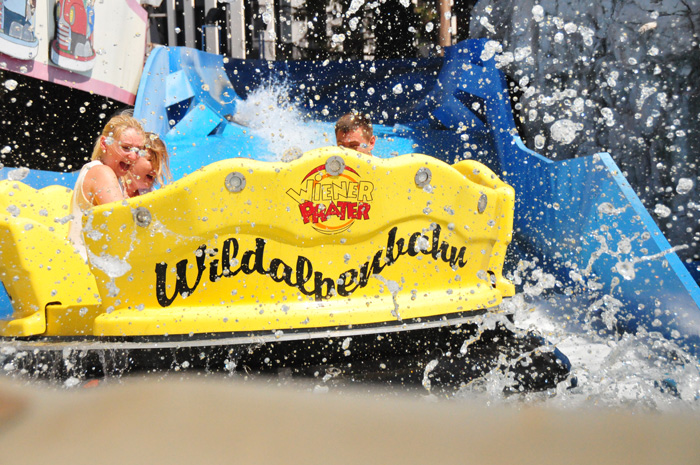 Another unusual object, which stands in the Prater, is the "Ball of the Republic", a small "state" with just one single inhabitant and one single house, the round house looking like a ball. Edwin Lipburger, the "President" of the state, built the house in the Katzelsdorf in the early 1970s and said that because his house is just using one point on the ground and there is no point in a point, it is erected in a state - free zone to proclaim their own republic. Later, his "republic" was shipped to the Vienna Prater and is still there today.

StreetArt in Vienna - beautify the gray of the highway pillars