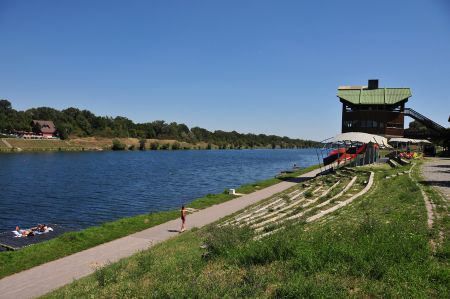 Like in Bremen (we have reported) and many other cities, cycling in Vienna has become quite popular too. The bicycle has conquered an important place in urban transport in the area of Vienna, but also in the surrounding regions.

The city of Vienna has set itself the goal of increasing the share of cycling traffic to 10% of the total traffic volume by 2025. As by December 2016, 1,346 kilometers of bicycle traffic facilities are supposed to encourage cyclists to explore Vienna on bicycle.

The change from the leisure and sports equipment to the daily means of transport takes place here in the city according to our experiences at an impressive pace. The city invests a great deal in order to provide the Viennese population with high-quality cycle paths as well as numerous tourist guests, especially the campers to use their bikes. In the early 1990s, the bicycle traffic network in Vienna had 190 kilometers, so in December 2016 1,346 kilometers could be rectified. The cycling network consists of different types of paths, such as cycling paths, cycling tracks, multi-purpose trails, cycle routes, wheel lifts (in the pictures) and traffic-calmed areas.

The planning of high-quality bicycle transport systems is a major concern for the city of Vienna, which is clearly visible in numerous constructions. As a result, the share of multi-purpose vehicles and bicycles will continue to increase steadily in the coming years. In addition to the expansion of the bicycle traffic network, the city of Vienna is increasingly focusing on the awareness raising of its citizens to increase the share of cycling traffic in the entire traffic volume.

The Danube Cycling Path EuroVelo 6, which has already been approved for use in September 1985, is an example of the rapidly increasing use of the bicycle in the recreation area here in Vienna. Each year, more than 100,000 cyclists are on the road. The route runs in large sections along the Danube, is part of the connection between Nantes and Constanta and leads through the cities of a length of the route of approximately 3,663 kilometers.

On the other hand, various routes can be combined on a local basis, which can then be used to tour the tourist attractions by bike, as is the cycling trail "Dampfross und Drahtesel". The cycle track is currently equipped with eleven adventure stations between Stammersdorf and Deutsch-Wagram. It partly follows the route of the former Stammersdorfer local railway (an article to the unfortunately adjusted tram network to Mödling will follow, since also a cycle path can be offered here), partly it runs parallel to the still existing train tracks. The cycle track, partly paved and off-road, is part of the European Cycling Route "Euro Velo 9" in its section between Vienna and Pillichsdorf. This connects the Baltic Sea via Vienna with the Mediterranean. The ceremonial opening of the first section of the cycle track took place on 25 September 2005. An addition of the adventure cycle path through further adventure stations (Deutsch-Wagram) as well as the extension of the cycle route to Gerasdorf are planned.

The other theme bike paths of Vienna have, besides the sporting aspect, also a lot of culture and nature to offer and this is usually well separated from the noisy car traffic. Here are further examples, also for download as PDF:

On the way to Danube Island in Vienna - Camping Neue Donau