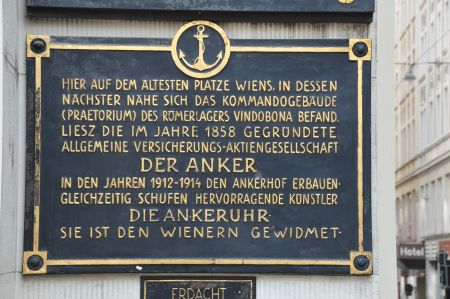 During extensive canal construction work in 1948, the remains of the tribunal houses of the legionary warehouse Vindobona were discovered at the Hohenmarkt in Vienna.

For a long time, the site of the Vienna Museum, which was formerly known as the Roman ruins on the Hohenmarkt, was difficult to reach for visitors. A narrow staircase led down to the ruins, which were in the basement of the building, while the upper rooms were rented to changing restaurants. The tightness, the lack of sanitary facilities and the relatively high number of visitors made an expansion necessary.

When, in the spring of 2007, the rooms became vacant over the ruins, the Vienna Museum took over the building and began planning a contemporary museum concept for a new museum. It should address not only school classes, but also families and tourists. Already in the first year after the opening of the museum the number of visitors doubled to more than 30,000.

Especially the research of the last years has expanded the knowledge about the Roman Vindobona and its surroundings. The extension of the "Roman Ruins High Market" site to the Roman Museum therefore allowed not only the history of the excavations, but also the history of Vienna in the Roman period. The focus is no longer on the Roman legion camp, which once stretched between the Danube canal and the moat, and whose direct reference can still be seen on the ground floor with the remains of the tribunes' houses, but also to the camps buildings and the civilian cities district. Thus both military life and civil life are represented. Due to its limited space, however, the main attraction of the Roman Museum is the 2nd and 3rd century, the Vindobona's prime time.

On the ground floor, the tour begins with a brief retrospective of the Viennese basin before the Roman settlement. Archaeological finds show a Celtic and, from about 50 AD, also Germanic settlement. The legionary Caius Atius, who is dated between 6 and 41 AD, is proof of the fact that the Roman military was already entering the Viennese area at the end of the first century before the legionary camp was built.

The legionary camp, which existed from the end of the first century to the beginning of the fifth century, is represented by buildings, small finds and reconstructions. Remains of the wooden palisades are preserved as well as wall squares and relief plates of a warehouse gate. Exhibited semi-finished products are evidence for workshops. Also remnants of wall painting of the legate palace are shown.

A further focus of the museum is the everyday life of the soldiers. On the ground floor, the topic of water supply and disposal is presented.
On the first floor, civilian life is the main theme. Costumes, inscriptions and ceramics from distant countries, which did not come to Vienna by trade, give an impression of a multicultural population.
Life in the camp and civilian cities is also addressed. The thermal baths, temples, theaters and the forum are located by represented small finds.

Religion, crafts, food, trade, roads and paths, housing, work, leisure, childhood and death are further topics that are dealt with on the upper floor. In the showcases are the various subjects assigned to the themes, while on the walls illustrations of the camp sited settlement, the civilian city and a grave street support the imagination of the visitors.

The ruins of the tribune houses can be found in the lower floor. These are related to excavation. At the stairs before the passage to the ruins, a layer sequence is shown on the wall, as can be found in excavations in the city center of Vienna. The remains of the two tribune houses show building phases from all phases of the legion camp. In order to be able to present the excavation site, minor additions and restorations were carried out, and some walls had to be removed. Their original course was marked white on the ground.
On the first floor there is a small separate area for changing presentations. This is where current research findings and excavations of various institutions related to the history of Vindobona are shown.

Some facts about the contemporary history of Vienna